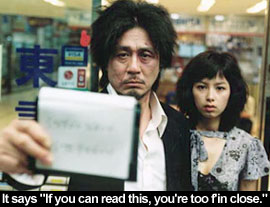 "I, the Wrath of God, will marry my own daughter, and with her I will found the purest dynasty the earth has ever seen." -Aguirre, Aguirre: The Wrath of God

A Greek tragedy, an opera, a showcase for South Korean cinema, and one exhilaratingly sick piece of cinema, Park Chan-wook's Oldboy is like the three plays of the "Oresteia" distilled into one pure, malevolent, volatile essence. It's vengeance served hot and perverse like a Medeaen stew, a story of settling scores old enough to be archetype married to sounds and images so invasively intimate that the process of working through the film is a little like getting physically violated. It's vital stuff, this Oldboy, its very title suggesting an ironic superhero alter ego--sketching anti-hero Oh Dae-Su (Choi Min-sik) as a fright-mask of arrested development, a child raging against its prematurely-aged body. We meet him one drunken night as he's bailed out of a night in the tank only to spend the next fifteen years in a solitary-confinement prison cell masquerading as a chintzy backwater motor inn room. He watches TV there, mostly cable news and its horrorshow of buildings and bridges falling, with periodic gassings allowing his anonymous captors to stitch up his wrists and gather biological mementos to leave at the scenes of crimes he didn't commit. When he's finally released, it's not clear if he's been falsely led to believe that he's free, if he's escaped by the graces of an ingenious plan involving a chopstick and a lot of time, or if he's died and this is his demented brain's oxygen-starved fantasy of what he woulda done to the lousy sons o'bitches if only he'd lived.

Whatever the case, being imprisoned in a tchotchke-filthy nightmare has made Dae-Su hard. His knuckles callused, his mind a thorny garden of ugly ideas, he eats a live octopus in three bites and passes out in the restaurant of young hottie Mido (Kang Hye-jeong). Of course it's love, but just as inevitably Dae-Su's hard heart needs first find release from fifteen years of nursing serpents at its breast. He tracks down his tormentor, learns the disquieting reason for his senseless imprisonment, and then learns the sickening truth regarding a certain May/September fling. It's all about finding new uses for a claw-hammer for Dae-Su and Fight Club's slick flash-editing and audacious CGI for director Chan-wook.

Tongues are mishandled, a reel-to-reel recorder is abused in a way unseen since The Conversation, and by the end of it, Oldboy has established South Korean cinema as one of the most consistently sensual cinemas in the world. There isn't a shot in the flick (not the part where Dae-Su takes apart a hallway-full of thugs, not the part where he licks boot like a peculiarly-trained pointer) that doesn't come equipped with some visceral sensation. And if in most ways it's an entirely different beast from such other South Korean fare as A Tale of Two Sisters and Spring, Summer, Fall, Winter... and Spring, dig a little deeper and you'll find that it bleeds in the same startling shades of crimson and bile. This is a movie about a world that has passed a man by, leaving him the ruins of the grand towers of idealism and Old Testament justice to shore up against the stuttering meaninglessness of suffering and vengeance. John Boorman once told Lee Marvin to think of his revenge-blinded character in Point Blank as having died in the first minute and the rest of the film a red-hazed dream of his ill-spent life having mattered. Oldboy is further fulfillment of that instruction, and it reaps its full portion of machismo's horrors and hosannas.

Rebecca Miller's The Ballad of Jack and Rose is another film revolving around fathers and daughters and an old boy who discovers at the end of his life that his saving grace might be that his daughter is made to forget that he ever existed. Intensely literate where Oldboy is intensely primal, it features mad monk Daniel Day-Lewis in his finest hour, crafting in ex-engineer, ex-hippie Jack the bookend to Jack Nicholson's George Hanson of Easy Rider: bound for tragedy on the horns of an impossible ideal. Jack lives on an island off the east coast of the United States with his daughter Rose (Camilla Belle), a wild child coming to flower in isolation with her father until he, suffering from an ailing heart, invites his girlfriend Kathleen (Catherine Keener) and her two boys to live with them. Rotund, queer Rodney (Ryan McDonald) counts the minutes until he can leave home to become a hairdresser while creepy Thadius (Paul Dano) indulges Rose's wish to "get back" at her father by sacrificing her innocence.

With much made of gardens and serpents loosed, The Ballad of Jack and Rose is suffocatingly pretentious, stuffed to the rafters with Miller's playwright father Arthur's gravid, stilted ghost, all phantoms of the promise of America swallowed whole by the death of idealism that maturity, by every right, should bring. More dangerous, the film, like Miller's directorial debut Personal Velocity: Three Portraits, stumbles badly across the finish line, introducing a new character and indulging in the kind of capitulating denouement that Miller is fast making her most glaring auteur tendency. But when it works, it's a pretense that I like, notably made palatable by Day-Lewis's extraordinarily eccentric, imminently recognizable performance. The actor balances the paper-thin interlopers (including an evil developer played by Beau Bridges) and Belle's sociopathic naïf ("Innocent people are just dangerous, I guess," says Rodney), bringing the picture closer by himself to the ballad of its title than to the dirge it constantly threatens to be. Originally published: April 8, 2005.