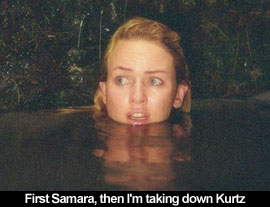 by Walter Chaw The hope that Hideo Nakata's The Ring Two will be as pleasant a surprise as Gore Verbinski's The Ring lasts all of five minutes. Two high school kids (Ryan Merriman and Emily VanCamp), alone without the parents, cuddle up to watch a video but, lo, the boy is just in it to get the girl "in trouble" so that he'll be off the hook while proving to a chortling pal on the telephone that he is, indeed, mas macho. All the reasons we had for doing the awful things we did in high school find a wonderful vehicle in a demonic videotape that, like a really bad venereal disease, kills anyone who indulges in it seven days after they "do" it. But the premise that carried the first film (and the original Japanese trilogy and mini-series)--the idea of a media-borne STD (or drug addiction), transformed here into something carried aloft by the virulence of peer pressure--is instantly discarded along with its deadline gimmick in favour of about two hours of garbage involving killer deer, a somnambulantly-possessed kid (if demonic possession renders your nine-year-old docile as a fawn, that's a trade-off some might be willing to make), and poor Naomi Watts huffing and puffing and delivering awful, repetitive monologues at her catatonic kid.

My theory is that screenwriter Ehren Kruger, who's never written a screenplay worth a shit (I'm looking at you, Arlington Road), finally found a sucker in non-English-speaking director Nakata, who couldn't modify Kruger's deadly stuff into something resembling human discourse. (Compare Kruger's screenplay for The Ring with what finally made it to the screen and tremble in appreciation for Verbinski's affinity for and conversance with genre fare.) Paired with someone actually worse at English than he is, Kruger's word suddenly becomes law, thus wondrous moments like Watts's Rachel grimly asserting, "Not here, Samara! Not. Here," over a hobo fire, or this brilliant exchange...

"You must have had a nightmare."

...survive intact without anyone having the balls or the ability to call "shenanigans" on the guy. Needless to say, it's overwritten, carefully enunciated in the hollow cadence of an M. Night Shyamalan supernatural soaper, and gruellingly mawkish in a ridiculous visit to one of those sanatoriums where Sissy Spacek appears in a hilarious cameo (channelling Carrie screen mom Piper Laurie's feverish religiosity), telling Rachel to be a good mommy and kill her possessed kiddo because, hell, that worked so great with bad seed Samara, right?

But it's not just the dialogue--The Ring Two is almost completely bereft of compelling ideas. A scene where a herd of adorable deer turn on Rachel's car is far more likely to induce bouts of helpless giggles than the goose pimples of the first film's panicked horse-on-a-ferry sequence. Call it the Bambi factor, there's something inherently non-threatening about deer: why not a herd of gerbils, the extra-fuzzy kind, throwing themselves at our heroes in a cuddly frenzy? Worse, after Rachel's sepulchral moppet Aidan (honorary Culkin, David Dorfman) whispers "don't stop, don't stop," and once the killer bucks have had their way with Rachel's sensible import, Rachel stops the car, turns to her kid, and says, "You said 'Don't stop'! How did you know?" It's stupid and, more, it's something like a tragedy that Kruger, et al squander the videotape idea (completely jettisoned, essentially, post-prologue), address then squander the Candyman/urban gods idea (after all, why does this virus want to replicate?), and crib unapologetically from Poltergeist down to the "follow my voice" plant before finally resorting--and not without desperation--to tired standbys like the shrink who doesn't get it (Elizabeth Perkins), the oily real estate guy (Gary Cole), and the haunted bathtub so recently plumbed in Boogeyman and Constantine.

The Ring Two is never scary, never even moderately tense, and its jump scares are so carefully telegraphed that it feels as though Nakata's embarrassed to resort to gratuitous startles. (What he's not, however, is embarrassed to steal the rationale for the picture's finale from his own exceptional Dark Water--and squander it, of course, with the help of Kruger.) A moment that pleased me to no end, however, is Rachel threatening her kid that she's going to get in the bathtub with him in what I imagined was Watts's extra-textual shout-out to pal Kidman's controversial dip in Birth--and another where zombie Aidan intones "We have to sleep," to which I swear I heard at least a few whispers of: "Waaay ahead of you, kid." The Ring Two is a deadly dull, frequently hilarious attempt to cash in on the success of the first film that doesn't have the first ghost of an idea of what it was about The Ring that tapped into the despair of the technological wasteland in a millennial United States. The thought that the arts are corruptive, both the drug and the delivery agent, is an idea upon which folks like Plato and William S. Burroughs agree, and a franchise like this one seems the prize channel through which to expand on the idea that language is a virus. What a terrible waste, then, that fine minds like Kruger's have decided instead to transform it into a substandard estrogen melodrama that boils down, and quick, to a lot of soporific nothing. Originally published: March 14, 2005.