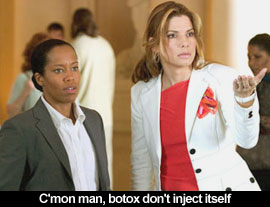 by Walter Chaw Where the first Miss Congeniality bravely took on three formulas (fish out of water, rogue cop, Cinderella), Miss Congeniality 2: Armed and Fabulous takes on at least six (fishes out of water, rogue cops, vanilla race tension, buddy movie, Beverly Hills Cop 3-/Bird on a Wire-style glossy big-budget cop procedural, nerd-makes-good underdog intrigue)--all with a black sidekick, which is a genre unto itself. It's a joyless, lifeless machine that can't even delight when it gets William Shatner to whine "there's a cannon in my porthole" in one of what seems like thousands of missed opportunities in the script or the scenario to do something bawdy or, failing that, something that doesn't have the texture and stink of week-old fish. Deafening silence is the only appropriate response to the picture. Guided this time around by John Pasquin, the genius behind Joe Somebody, The Santa Clause, and Jungle 2 Jungle (last time it was Donald Petrie, the genius behind Richie Rich and Welcome to Mooseport), producer/star Sandra Bullock demonstrates that for as problematical as her appeal may be to the non-clinically gaffed, harder still to understand are the choices Bullock makes of whom to entrust with her cash and career. I guess Jon Turtletaub and Garry Marshall were busy that week.

Seems Gracie (Bullock) is so well-known after her pageant hijinks that it's become a liability on her undercover missions--whereas before, it was just her incompetence that was a liability. Call it progress, why not. Miss Congeniality 2 opens exactly like the first film does: bad bust, cop shot, Gracie's fault. The solution this time isn't desk duty but a horizontal promotion as the FBI's spokesperson, expected to go on Regis Philbin's show, for instance, and present a pretty face for the Bureau. Since unimaginative sequels tend to reset any emotional and intellectual progress made by their protagonists (see: Legally Blonde 2), Gracie reverts to full-boor slob while Regina King--her character named after tabloid filmmaker Sam Fuller for no good reason but to give screenwriter Marc Lawrence a good, hard, vicarious wank--takes on the bull dyke duties in eternal scowl and sweats. Because Fuller's black and because this is essentially a romantic comedy with no romance, Gracie and Fuller start out by hating each other during a heated argument over whether or not Gracie is ghetto enough to call Fuller "sister." (In a movie just a hair braver, if not better, the argument would be over the word "nigger"--making Miss Congeniality 2 an ossified joke edited for your protection and performed by your great aunt.) Because it seems de rigueur in mild race comedies nowadays to insert a flamboyantly gay character so that both races can at least agree on something to mock in harmony, enter Joel (Diedrich Bader, our generation's Jim J. Bullock): a homosexual stereotype so unflattering that he wants a taser to the genitals and prison time, presumably to experience the gay rapture of being violently raped.

Which is not to say that I was offended in the slightest by Miss Congeniality 2; Miss Congeniality 2 is way too boring to be offensive. If you've ever seen another movie in your life, you can mark off the scenes in order of their appearance and predict the R&B remake soundtrack and the flat sets and medium camera placements. It's so badly edited and timed that the jokes aren't surprises as much as they're clinical exercises in how not to tell a joke: you recognize that it's a gag and you understand that the gag has failed, and then it just sits there pathetically for a long time until the next gag implodes. The film is a victim of a failure in imagination in its writing, in its execution, and in just the fact of its existence--the kind of fiasco that inspires weariness instead of outrage. Its purpose isn't to entertain, its purpose is to validate the success of the first film by turning it into a film that now has a sequel. When Gracie and Sam find themselves on stage for a protracted gag at a drag revue, the appalling thought that swims to mind is that Miss Congeniality 2 is walking the same path recently plodded by Nia Vardalos's garish trainwreck Connie and Carla. I don't know why I should be embarrassed, but I am. Now if we could just teach Bullock a little shame, we might actually have reason not to dread her next vehicle. Originally published: March 30, 2005.