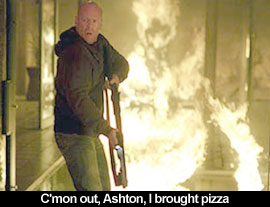 by Walter Chaw A film about child endangerment that is not otherwise about child endangerment, videogame director Florent Siri's Hostage is a package advertised by its trailers as being about a terror cell when it is, in fact, about three juvenile delinquents looking for a car to jack who accidentally find themselves the heavies in a hostage situation. Maybe "terror cell" applies to the filmmakers, as "hostage situation" pretty accurately describes the experience of being trapped in a theatre watching Hostage. (Except that it's completely sans Stockholm Syndrome: if anything, there's actually a deepening of resentment for our captors as the ordeal wears on.) Reteaming Bruce Willis with Die Hard 2 scribe Doug Richardson, it's essentially a play by Willis to muscle his way back to the top of the action-movie heap. Bruce looks for a little street cred as one of those down-on-his-luck cops who, haunted by a bad bust (see Ethan Hawke in the recent Assault on Precinct 13), finds himself months/years later the big cheese in a quiet precinct that's going to need his experience.

Besides John McTiernan's conversance with action movie archetypes, the allure of Die Hard--another film featuring Willis as the representative of American values saving his family--is its genuinely fascinating subtext. European terrorists take over a Japanese corporation based in the United States during that most Judeo-Christian of pagan holidays--with all that xenophobia/invaders-from-within paranoia encapsulated by Run DMC's "Christmas in Hollis" (another minority voice re-imagining the white Christmas), which plays on the soundtrack as Willis's beleaguered cop John McClane pulls into the parking lot of his wife's office building. Appearing late in Reagan's '80s dystopia, Die Hard is a genuine artifact of American boorishness: a bracing, barbaric, Yankee yawp that made "Yippee Ki Yay, Motherfucker" the patriotic catchphrase of the decade and a garrotted, effete Alexander Godunov the effigy of choice. On the flipside, Hostage isn't patriotic; it's grim and nihilistic and excreted from a masterplots machine that finds John McClane transmogrified into ticking-off-the-numbers John Talley, and his cowboy motto twisted into the inscrutable "Captain Wooba is gonna save Planet Xenon." Doesn't exactly get the blood pounding in the same shade of red, white, and blue.

Already the fourteenth or fifteenth film this year to deal with home invasion (and derivative in countless other ways of countless other films), Hostage distinguishes itself by being genuinely vile. The bust-gone-wrong includes a little kid shot in the neck by his looney tunes dad (while Willis inexplicably replicates his 12 Monkeys hairdos: first in a bad wig and beard, next bald), and the story proper finds little Tommy (Jimmy Bennett) knocked around and needlessly endangered while little Jennifer (Michelle Horn) is tied spread-eagle to a bed after having been leered at by looney tunes delinquent Mars (Ben Foster, channelling Ryan Gosling) for the bulk of her imprisonment. Tommy and Jenny are the all-American spawn of greasy underworld accountant Walter (Kevin Pollak), their dysfunctional triad set against Chief Talley's own dysfunctional triad, with Willis's own daughter, Rumer, playing his screen daughter and asked mainly to histrionic for a moment before spending the rest of this mess screaming into a gag or a hood. No performance is free of exaggeration--no action scene is played without the requisite pornographic adulation of headshots and corpses posed in mockery of religious ecstasy.

Hostage ostensibly finds Willis as, again, the representative of good old American values, this time saving not one but two families from capricious foreign invaders. Three rejects from The Outsiders break into Walter's fortress-like home while eurotrash of indistinct origin (indeed, they're masked throughout) kidnap Talley's family to force Talley to retrieve some vital MacGuffin from Walter's house before the fuzz can move in. It's all calculated with an extraordinary amount of cynicism, crafted with the one goal in mind of canonizing Willis into the pantheon of protector of the holy crown of domesticity by throwing children into the path of oncoming threats. It's the Homeland Security coloured warning system decorated by pictures of your kids: threat level Red, little Tommy's dead. What I'm saying is that Hostage exploits our instinct to protect and fear for children--our desire to keep them from getting stabbed in the face and/or raped, for instance--for the sole purpose of providing Willis with the opportunity to have one of the most unintentionally hilarious crying scenes in the brief history of film. It's an ego trip and a marketing scheme targeting a nation in terror, mourning for children dying daily for causes we don't entirely understand. As time capsules of our defeated, misanthropic age go, Hostage is pretty good. As cash grabs go, it's pretty despicable.