by Bill Chambers The memory I have of watching Bill Cosby's "Fat Albert and the Cosby Kids" as a wee lad is that it always left me a little bit depressed, like listening to Jim Croce's "Time in a Bottle" or dining at the Ponderosa restaurant. (Doesn't "ponderosa" mean "weighty" in English?) Subtext is a kind of phantom presence when you're five or six years old: you're too young to be able to read it but also young enough that you've not yet been blinded by anti-intellectualism to everything below the surface. I realize now that it was probably through the Saturday-morning buzzkill of "Fat Albert..." that I became cognizant of poverty, and just the fact that the show was populated with an all-black cast of ragamuffins (almost all of whom suffered from learning disabilities) took the patronizing sting out of its NBC Life Lessons--it was less pious than it was possessed of an old soul. I'm happy to report that Fat Albert, an anachronism of a live-action feature film based on the long-running (and long-cancelled) cartoon, captures a lot of its source's melancholy appeal. Moreover, its ideas are provocative verging on profound, although they're shackled to a sketchy screenplay (by Cosby and Charles Kipps) and an aesthetic that is as paint-by-numbers as the animation that inspired it. No surprise that director Joel Zwick hails from television--multi-camera sitcoms, to be precise.

A kind of inverted Pleasantville, the picture begins with the 2-D Fat Albert and the Junkyard Gang playing their signature theme ("Gonna Have a Good Time"), which in their defiant joy they will reprise at regular intervals throughout the piece. Meanwhile, in "real" but Hollywoodized North Philadelphia, teenaged wallflower Doris (Kyla Pratt) is getting upstaged by her exponentially more popular foster sister Lauri (the insanely attractive Dania Ramirez) outside her locker in what appears to be part of a daily ritual for both girls. Once home from school, lonely Doris seeks solace in a "Fat Albert" rerun, and when she cries on the remote control, it creates a gateway of sorts between her world and that of the Junkyard Gang. Soon Fat Albert (a truly lovable Kenan Thompson), Mushmouth (Jermaine Williams), Bill (Keith Robinson), Bucky (Alphonso McAuley), Dumb Donald (Marques Houston), Rudy (Shedrack Anderson III), and Old Weird Harold (Aaron Frazier) have emerged from the set like so many benign Samaras to answer the siren's song.

Certainly not a new thing, characters stepping off the screen was done better (and best) in Woody Allen's incredible The Purple Rose of Cairo, but the idea of a teardrop rupturing the fabric of art is sort of unspeakably poetic, at once encapsulating the empathy of "Fat Albert and the Cosby Kids" (and really the only children's entertainment that's worth a damn) and, water representing life and whatnot, suggesting that Doris doesn't summon her companions so much as she gives birth to them. (Note the tunnel shape of the portal Fat Albert and co. squeeze themselves through.) As a fantasy of single-motherhood, then, Fat Albert is optimistic--promoting retro qualities in future generations like courtesy, kindness, and humility, none of which Doris or Lauri have been able to find in potential suitors--and, in its implication that the problem of rampant teenage pregnancy stems in part from a Frankenstein fantasy of making creatures of veneration brought on by contemporary isolation (forlorn Doris has parents, but they're post-nuclear family, i.e., otherwise engaged), utterly trenchant, if a tad irresponsible: Everything works out, er, hunky-dory for Doris.

Unfortunately, Fat Albert bites off more than it's willing to chew--the film looks unnecessarily incompetent at times. ("Hasty" is a more conscientious accusation to lob at this fast-tracked production.) For instance, the corporeal Mushmouth discovers an ability to speak perfect English (no doubt an extension of Cosby's recent tirades against ebonics, though putting a white toddler in the Henry Higgins role is pretty snarky), while Dumb Donald learns that he has a face beneath his creepy pink Coronet cap, oafish Old Weird Harold uncovers a knack for shooting hoops, and so on and so forth; and yet it's never clear whether they gain these mortal powers because they're off-script or temporarily human, since Fat Albert--in a sight gag only there to bemuse the fanbase--has the ability to run at a physics-defying speed endemic to his alter ego, and Bucky's pants leave a skidmark of paint as he slides down a concrete banister. Why don't they lament their forced return to the TV series with more conviction, I wondered, especially after half the Junkyard Gang is left behind to witness the televised devolution of a hatless Dumb Donald to a pair of floating eyeballs. (Fat Albert's own protests are rooted in his desire to continue comforting Doris and Lauri.) It occurs to me that on some level, Fat Albert is a Pinocchio allegory in deep denial.

A lack of conceptual clarity also curiously deracializes the Back to the Future trope of Fat Albert and friends having only so much time away from their present before they cease to exist. Though Zwick references Back to the Future in an arbitrary shot of a transparent hand, he mostly marks the progression towards doomsday in an appropriately old-school fashion by dressing the boob-tube fugitives in lighter and lighter shades of clothing. They're losing their colour, in other words, yet a possible Michael Jackson joke embedded in the white guy who has co-opted Rudy's wardrobe telling Rudy to "Lay off the bleach, man" is as far as the subtext seems willing to stretch. What's happening--and it's a beautiful, hopeful notion, however wilfully ignorant in context--is that Fat Albert and the rest are in danger of being forgotten: A metatextual visit to Bill Cosby (fainting, oddly, upon opening the door to the big guy--surely he's seen his share of trick-or-treaters in Fat Albert drag) confirms that Fat Albert himself is based on Doris's late-grandfather (Cosby's real-life childhood friend, Albert Robertson), who has achieved what J. Michael Straczynski calls "immortality by proxy." Flesh and blood dies, memories fade, but art is our amber, meaning that the entire movie functions as an auto-apologia--and a charming one at that, even if the film's huge heart can only ever really be considered a trade-off. 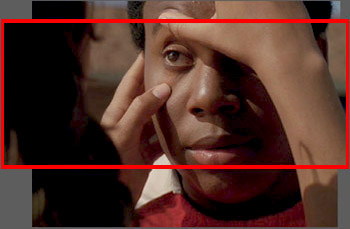 THE DVD
Fox presents Fat Albert on DVD in 2.35:1 anamorphic widescreen and fullscreen transfers on opposite sides of the disc. Because the film was shot in Super35, the former actually crops a substantial amount of horizontal screen information while adding some to the right and particularly left sides of the frame (see above), but overall, it exhibits a cleaner sense of composition. Detail and contrast are up to the standards of today, and while the colours are eye-popping almost to a fault, I think that's to play up the costume gimmick. The Dolby Digital 5.1 audio is your typically timid, front-loaded comedy mix, with the exception of Fat Albert's T. Rex-style footsteps during the animated prologue and epilogue. An aggravating optional feature-length commentary from the proudly unmeticulous Joel "Z. Diddy" Zwick and producer John Davis decorates both versions of Fat Albert. The two very clearly have no idea what demographic this yakker falls under (quite frankly, neither do I), and so they zigzag back and forth between wild condescension (that is, pointing out what is animation!) and sycophancy. While I'm sure it was real nice of the "busy" Bill Cosby to show up for his cameo, didn't he write himself into the script? And executive-produce the film?

The widescreen side additionally contains two fairly negligible deleted scenes, the first of which has Dumb Donald mistaking a microwave for a television, the second of which introduces another unexplored but fascinating tangent whereby Mushmouth's former translator Bill finds himself outmoded and annoyed by his friend's newfound eloquence--as well as Fat Albert's trailer and a horrid preview for The Sandlot's direct-to-video sequel. Flip the platter to access: the quasi-documentary "Fat Albert: Behind the Band" (10 mins.), featuring worthless celebrity cameos and in-character, impromptu wisecracks from the stars (Thompson lazily recycles The Ladykillers' turn-of-phrase "hippity hoppity music"); "Inside Look"s at Ice Age 2: The Meltdown and Rebound; and pre-menu PSAs for anti-piracy and Fox's afro-centric titles. A cardboard jacket slips over the red keepcase. Originally published: March 23, 2005.