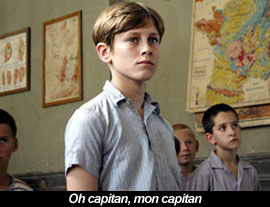 by Walter Chaw The one good thing about Christophe Barratier's unbelievably inane, saccharine, and derivative The Chorus (Les Choristes) is that it offers the much put-upon American public a little comfort in the knowledge that the French mainstream (which made this film its top-grossing title of last year) has just as unquenchable a sweet tooth for pap. Useless to discuss at length, The Chorus is essentially another in a line of literally dozens of films in which an inspirational teacher changes the lives of a group of troubled/lower-class/underestimated children through will, kindness, and a rogue spark of crinkly-eyed genius that irks to no end the evil dean/headmaster/school board/community. It's not as bad as Filipino contribution Little Voices, nor is it as good as, say, Goodbye Mr. Chips--locating it somewhere in the neighbourhood of a disaster like Mr. Holland's Opus or the endlessly weird Wes Craven (!) picture Music of the Heart. Taken on its own merits, pretending that you've never seen Dead Poets Society, Stand and Deliver, The Blackboard Jungle, Conrack, Mona Lisa Smile, Dangerous Minds, Renaissance Man, Coach Carter, and so on and so on, The Chorus is still unspeakably maudlin and presented in so straightforward a fashion that if you did the right thing and asked for your money back after five minutes, you could reasonably fake having seen it to a circle of friends, who will admire your stamina in having sat through the whole benighted thing.

The World's Greatest Conductor (Winged Migration auteur Jacques Perrin), so proclaimed by a magazine cover to remove any trace of doubt, receives a visit from a childhood pal with whom he attended a school for wayward boys called, so as to remove any trace of doubt, "Rock Bottom." This leads to the unveiling of a diary and then a film-long flashback to things the diarist could not possibly have witnessed (as is the custom for such jolly pieces of shit), all cast in a sepia glow--even kids being orphaned by Nazis, twisted by sadism, abducted, probably sexually assaulted, and definitely physically abused. Awww, aren't they adorable? What's more adorable is when Clément Mathieu (Bob Hoskins manqué Gérard Jugnot) arrives on the scene as the teacher with a secret (he likes to compose choral music!), disapproves of the sadistic principal's (François Berléand) sadistic methods, and decides he'll teach his band of adorable ruffians how to sing in perfect castrati harmony. This, of course, is all the delinquents needed to turn their lives around, and when Mathieu is inevitably dismissed, the students offer up a show of silent support every bit as moving as standing on desks, biking after taxis, saluting silently while one perfect tear creases their cheeks, et cetera.

How things like The Chorus even get bankrolled is the fault of the legion of undemanding, belligerently ignorant, indefatigable audiences seeing it braindead and, pod-like, urging their friends to do the same--in addition to drooling critics/pundits like Michael Medved (who complains that awards shows don't listen to the average moviegoer when they nominate films that haven't grossed a lot) and the Academy of Motion Picture Arts and Sciences, which, without fail, chooses stuff like this to nominate for Best Foreign Film (remembering that the country in question, this time film-crazy France, first has to nominate one of their own for consideration). If the popular taste weren't so easy to massage, in other words, The Chorus wouldn't stand a chance.

Lost in the popular conversation regarding how much filmmakers underestimate their audiences is the real troubling truism that respect is earned, not granted. Make Christmas with the Kranks and Are We There Yet? and, yep, The Chorus, financial windfalls for the jerks with a low opinion of you, and open wide for years more of the profitable dreck they're only too happy to shovel down your gullets. Holly Hunter's character in Broadcast News makes a point about this during a disastrous presentation early in that film, saying, "I'm glad you like it, you're going to get more of it." And a woman in the audience heckles: "Good." Same warning (and, looking at the receipts, same response), making my little diatribe, though it's free and probably didn't take you ninety-minutes to wade through, just as useless and unsurprising a use of time as the movie proper. Originally published: February 4, 2005.