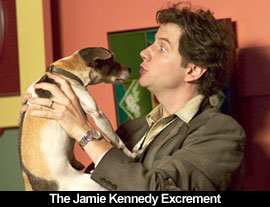 Son of the Mask follows Norse god Loki's wooden mask as it bestows the mischief avatar's powers on whomever/whatever should wear it, wreaking almost as much havoc on the life of abovementioned loser Tim (loser Kennedy) as does the birth of a son who has, apparently, been fathered by the mask. Rosemary's Baby discomfort surfaces along with an extremely disturbing dream sequence in which Tonya (Howard) shoots a succession of babies out her gyneco with the rapid-fire effect of a frantically-cranked sausage mill. Tim attracts the notice of his boss (Steven Wright) while, in a parallel story, Loki (Alan Cumming) earns the ire of his father, Odin (Bob Hoskins), and must find the mask before--Ragnorak, perhaps? All signs point to "happened already."

Moments of Tex Avery homage (we're following the "Avery" family, after all) recall the best of the middling first film, reminding too that the other 97% of Son of the Mask is essentially people yelling and falling down and a CGI dog and baby having a CGI war. Other horrors include Kumar, Kal Penn, cast as a Hispanic lad named "Jorge," next-door neighbour Betty (Magda "Esme Hoggett" Szubanski) getting turned into a giant schnozz, and Cumming indulged by twice being allowed to appear in drag. It's a deadening experience, as lifeless as it is feckless--a movie with no messages, no plot, no real subversive quality, and no recognizable characters. But it does have an endless succession of unfunny gags, bad timing, and amateurish editing. The requisite eleventh hour attempt to tack on sentimentality to dupe the gullible that what's transpired is non-Addams Family-friendly is final proof, were proof needed, that Son of the Mask is nothing but an expensive cash grab. If there's any sort of justice in the universe, it will yield no fruit: No matter how much you paid or were paid to watch this capophagic mess, son, you been robbed. Originally published: February 18, 2005.