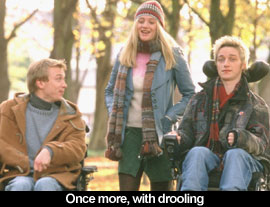 by Walter Chaw Looking for shock value, the more unkind would call Rory O'Shea Was Here "One Rolled Over the Cuckoo's Nest": the film is a straight-up rip-off that substitutes Randle McMurphy and Chief Bromden for plucky punk afflicted with Muscular Dystrophy Rory (James McAvoy) and his cerebral palsy-afflicted chum Michael (not Donnie Wahlberg). Because neither actor is actually afflicted, it can be said that their performances are at best affected; at their worst, and at the service of a condescending screenplay, the two come off as patronizing caricatures engaged in an insipid waltz around the real issues that arise when you're thrust by disability into the full-time care of strangers. It's a great idea to cast the disabled in lead roles, even romantic (gasp!) roles, in motion pictures, but it's a terrible idea to do so for the express purpose of making them into noble savages from which we can suckle our portion of moral outrage and smug, shit-eating superiority. Best, the rebel that brings a sparkle into the lives of everyone he touches has the decency to croak as his last act of charity, allowing the much-maligned social order to go on ticking with one fewer annoying gadfly.

Unable to convince the board of a full-time care facility that he deserves a chance to live on his own, Rory does the Sid Vicious thing, annoying all the nurses (including inevitable Nurse Ratched clone Brenda Fricker) with his loud music and insistence that his hair be gelled. Enter Michael (Steven Robertson): incomprehensible to everyone but Rory and abandoned at birth by his rich barrister father, he gains his freedom with the caveat that Rory tag along as his translator. The pair hires a party girl, Siobhan (Romola Garai--shuffling sideways from Dirty Dancing: Havana Nights), to be their primary caregiver (of course), and the three have the sort of charming misadventures that only the adorably disabled can have with a semi-hot chick. Like the bit where Rory picks a fight in a bar. Or the part where a real estate agent callously tries to show our dynamic duo a flat with a flight of stairs. Or the montages set to Johnny Cash's cover of "Hurt." Or the sequence--this one's my favourite--where Michael gets a woody while Siobhan's scrubbing him down.

Still, it'd all be different if it were played with dignity instead of giggles and pathos. A scene, pointedly wordless, at a quaintly allegorical costume party where Siobhan is forced to fight off Michael's drunken advances, for example, demonstrates the power at the root of the most basic issues of yearning and freedom that go candy-covered through the rest of it. Rory O'Shea Was Here is a sentimental, mawkish melodrama that panders to the worst paternalistic instincts of the able-bodied. (Changing its title from the horrendous "Inside I'm Dancing" suggests that the filmmakers had at least a soupçon of self-awareness.) Its disabled characters are something like angels: sometimes irascible, mostly just angelic, floating through this world like ephemeral harbingers of wisdom and courage not for themselves but for the whole wide world, which apparently needs a double shot of what Rory's got. Real people with real problems deserve to be more than proverbial Christopher Reeves bolted, as THE ONION once suggested, to proverbial Washington Monuments for the inspiration and adulation of a mob eager for a quick fix of the cool comfort offered by the inoffensively black and white. Originally published: February 4, 2005.