by Walter Chaw Mean Creek is poised at the magic hour of the death of innocence. It deals in corruption like a maggot will, burrowing and gnawing its way through true fauna to take its sustenance in its blithe, indifferent way from the dying of the light. The film represents in its existence and function a transitional vehicle between the end of life and rebirth. In Mean Creek, a slug crawls across cold flesh in a quiet, crepuscular moment; a snail (similar/different) is punished an instant later by a clear-eyed little girl, completing her exile from Paradise in a stroke remarkably brutal not necessarily for the act, but for the freshness of the stain on the perpetrator. The picture's title refers not to malevolence, but to a nature metaphor that works as the centre-point--the protean "mean"--between two extremes. It is that ever-tilting line that marks childhood's end: mercurial, sure, yet as substantial and rude as a brick wall.

Sam (Rory Culkin) has a crush on Millie (Carly Schroeder), or maybe Millie has a crush on Sam. By the end of Mean Creek, Sam will be in love with Millie, and he'll ask her what it'll be like when they've gone to college and become doctors and lawyers. Rocky (Trevor Morgan), Sam's older brother, is best friends with the self-destructive Marty (Scott Mechlowicz), who's dangerous and from the wrong side of the tracks. For tormenting Sam at school, Sam, Rocky, and Marty lure bully George (Josh Peck) on a rafting trip for the purposes of schoolboy justice swift and cruel.

First-time hyphenate Jacob Aaron Estes, whose script was a Nicholl Fellowship winner, has made an alchemical film so insightful in its calm understatement that it rakes itself along closely-held chords of adolescent insecurity and heartbreak. Though there are numerous opportunities for Mean Creek to turn didactic or overwrought, Estes chooses calmer waters at every bend in the labyrinthine river of budding adolescence. The emotions of children on the cusp of an uneasy adulthood (same fears, more baggage) are complex enough that attempts at drawing them out through dialogue or allegory are foolish--in place of pretension, Estes has two boys, two brothers, talking about girls as they walk in the insectile buzz beneath electrical towers, which loom over them like skeletal giants in a field of wheat and weeds. An air of doom hangs over each frame of the piece in this way, colouring its moments of innocence with the taint of experience.

Mean Creek is a Romanticist text. It takes nature as the first testament, retelling the story of Eden from a kiss (lips to ripe apple, lips to lips) to that dreadfully ordinary secret of the difference between good and evil. Rather than being something as simple as a bully, George is just a kid. They're all just kids, the characters and the actors who play them--this is as wondrous and transcendent (and transparent) an ensemble as any assembled this year. I boast an affection for nihilistic films but confess a real weakness for nihilistic films that reveal themselves to be fables. Mean Creek has a reason for being, offering morality and hope amidst this cess of mundane cruelty. As a Romanticist text, a sense of loss emanates from it like an odour of fog on the air--stale and fresh, familiar and alien, and pregnant with promise. It's a solid companion piece to Andrei Zvyagintsev's The Return, another commendable shrine to Terrence Malick, and a coming-of-age film that finds poetry in the struggle to evolve even while the rest world is falling down. Originally published: August 20, 2004. 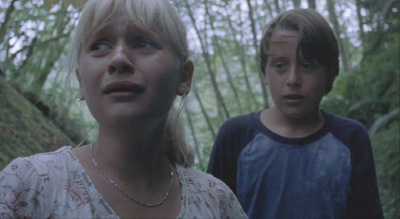 THE DVD
by Bill Chambers Paramount releases Mean Creek on DVD in a magnificent but deceptive 1.83:1 anamorphic widescreen transfer. I was ready to carp about the decline in shadow detail whenever the action shifted into a darkened interior until I listened to the commentary track and discovered that the entire film (save the camcorder footage, natch) was shot on Super16--you would never guess from this crisp, beautifully-saturated presentation that it originated on anything less than 35mm. (Low-latitude black level and intermittent scuff marks (Super16's emulsion is especially vulnerable) are the only prominent telltale signs.) Taking the source elements into consideration, then, this is a flawless rendering, one with the potential, God willing, to lure up-and-coming filmmakers away from faddish digital video. Note quite as obviously impressive is the Dolby Digital 5.1 audio, which features no standout moments, although whether whispered or shouted, the dialogue sounds very nice.

Writer-director Jacob Estes, DP Sharone Meir, editor Madeleine Gavin, and actors Josh Peck, Trevor Morgan, Ryan Kelley, and Carly Schroeder team up for the aforementioned feature-length yakker; perhaps a form of self-preservation, their conversation favours technique over introspection, even in terms of how individual performance moments were achieved. (The 13-year-old Schroeder provoked the desired reaction to the question "What's it like to be male?" from co-star Rory Culkin by saying progressively lewder things to him off camera.) Estes, who seems a trifle humourless, keeps the conversation flowing after a sputtering start, but his cast--showbiz vets, all, despite their young ages--often takes more prompting than his crew, with the possible exception of Peck. A gallery of comic book-ready storyboards plus previews for Enduring Love, The Machinist, The United States of Leland, Love Me If You Dare, I'll Sleep When I'm Dead, Intimate Strangers, and the Mean Creek soundtrack precede the main menu (chapter forward to skip them) and round out the disc in a dedicated section. Originally published: February 9, 2005.