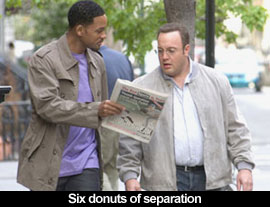 by Walter Chaw Defying all odds by not being awful, what Andy Tennant's Hitch lacks in originality it makes up for in chemistry between Will Smith (true heir to Cary Grant's romantic comedy crown) and the lovely Eva Mendes, both of whom find their stride in what amounts to a 'Black Eye for the White Guy' take on screwball farce. Only occasionally, in other words, is it apparent that the dialogue is excrescent and that this is another one of those movies that ends with a long wedding sequence where people shimmy in front of the camera. Strike against it that it resists pairing Smith with a Caucasian actress because African sexuality is almost as threatening to white sexuality as homosexuality, but it does allow the erstwhile helper fairy to have a love life of his own parallel to the hopeless fat cracker fast becoming the most popular of the new reviled minorities. It's a good thing that, for the most part, they don't seem to mind--call it the CBS/Homer Simpson/Matthew Perry syndrome.

Hitch (Smith), a smooth, fourth-wall breaking ladies man (like Alfie or Robert Downey Jr. in The Pick-Up Artist), makes his living helping the helpless attract the attention of their ladies fair. An uncomfortable opening montage that dances delicately along the line between Hitch being a saint and Hitch being a pimp resolves into a film that reveals itself as essentially good-natured. (Hitch, it seems, has morals, deciding in one obviously key sequence not to take on a client.) Like "The Taming of the Shrew" or Emma, Hitch meets his match in tabloid columnist Sara (Mendes), who mistakes his helping schlub Albert (Kevin James--the real surprise of the show) to woo heiress Allegra Cole (Amber Valletta) for something venal instead of something wonderful. This will lead to the expected delightful romantic misunderstandings, the public humiliations, the dramatic castrations and spayings, and the inevitable reunions in which all sides, wiser and less endowed, decide on a life of cringing domesticity in the moments after the film that promise to be more interesting than the moments within.

This is not to say that Hitch isn't a pretty diversion while it lasts. Though Tennant never goes so far as to betray wisdom beyond the John Gray strata of insight on male/female relations, he knows to let Smith and Mendes to slide through the postcard scenery with liquid grace. The Manhattan of Hitch is a remarkably small world where seemingly every character, incidental or not, is connected to someone else in the film; it's neat--maybe too neat--and modeled pretty clearly along the lines of a fairy tale--like, say, Maid in Manhattan, In Good Company, or last week's professional-man-whore comedy The Wedding Date. (Stay tuned next for Rob Schneider's Deuce Bigelow, European Gigolo.) It's one of those films where its two major laughs have been revealed by the trailer, so that the giggling starts in anticipation of the punchline in one of the strangest and most revealing indicators of Hitch's looming popularity--and the best that one can ultimately say about it is that it knows its formula well enough to run its finger along the grooves quick and smooth. There's still room, I guess, for movies that, with a surplus of bright-eyed charm, treat gays as funny office-mates, blacks as soul-injectors, and women as fantasy objects to be elevated to impossible heights. For what it's worth, I laughed. Originally published: February 11, 2005.