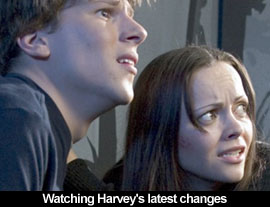 by Walter Chaw Butchered beyond recognition by the almighty Weinsteins, director Wes Craven's promised 'hard R'-rated werewolf homage/satire Cursed is now a disjointed, disowned, completely sanitized PG-13 tweener shocker so chaste that it's not entirely unlike watching Heidi with more jump scares. Great, giant bits of gore have been excised from the film and what's left doesn't match, has no rhythm, and is almost completely reliant on An American Werewolf in Paris-bad CGI. It's been eviscerated like the werewolf's first victim used to have been, resigning it to the sweet embrace of snarky irony that it hoped itself to use on the werewolf genre. Cursed is a terrible waste of makeup-effects master Rick Baker's return to the game (he's the guy behind the groundbreaking work in An American Werewolf in London); a waste of the menstruation metaphor suggested by its title; and a waste of the reunion of the creative team behind the gory, smart, post-modern slasher flick Scream (Craven and writer Kevin Williamson).

In some funhouse movie bizarro world, Ellie (Christina Ricci) and Jimmy (Jesse Eisenberg) are sister and brother (holy recessive genes, Batman). They have a car accident one night, hitting a wolf-like creature (like Lon Chaney does in George Waggner's The Wolf Man) and bearing witness to a young woman getting ripped bloodily asunder by said beastie. More Wolf Man arcana: said young woman (Shannon Elizabeth) and her friend (Mya) were just foretold their doom by a carnival gypsy (Portia Di Rossi does Maria Ouspenskaya duties); a full-scale model of Chaney Jr.'s Wolf Man appears in a nightclub owned by Ellie's boyfriend, Jake (Josh Jackson); and a pursuit through a labyrinth of mirrors suggests the line from the 1941 film that it's a damn shame when a man gets lost in the maze of his mind. A love subplot between Ellie and Jake is meant, I think, to evoke An American Werewolf in London (still the only werewolf movie I've liked without qualifications), while a high school bullying and love subplot between Jimmy and Brooke (Courteney Cox look-alike Kristina Anapau) is there to appease Williamson's fanbase (as well as Teen Wolf's) and Ellie's professional struggles with venomous publicity agent Joanie (Judy Greer)--shades of Mike Nichols's Wolf--is a set-up for the punchline that Joanie represents Chachi, Scott Baio. Unintentional, probably, is how much Ricci's performance evokes Halle Berry's tuna-eating minx from Catwoman.

Mucking the pot, there're also a lot of references in here to vampire lore (Ellie sucks blood off Craig Kilborn's finger in the movie's funniest scene, and Jimmy has a relationship to his dog that reminds a lot of the one Corey Haim (not Corey Feldman, who was also cut from this film) had to dog Nanook in The Lost Boys), in addition to a few shots of a figure of the Max Shreck Nosferatu looming in one inexplicable background. All this not mentioning a car accident that happens on a familiar bend of Mulholland Drive, or Ellie catching a fly in her hand like early-stage Brundlefly in David Cronenberg's The Fly (and there's a little ceiling-crawling too, nothing that the trailers--50% of the footage from which didn't survive the final cut--haven't already spoiled), or a glimpse of a "Hellboy" comic that might be a nod to composer Marco Beltrami's presence in both del Toro's picture and Craven's. There's not too much that isn't an in-joke in Cursed, and because it's such a shambling patchwork of a Frankenstein's monster after its hasty editing, the only possible pleasure to be had from the exercise is in trainspotting its references.

For all that, this kind of thing has already been done--and better--by the tongue-in-cheek The Howling and An American Werewolf in London. When you gut any film (but especially one reliant on suspense) for any reason, much less to appease the flyovers and Puritan hand-wringers, what you're left with is a piece that's underfed and indecipherable. There's no tension to Cursed, and, with its timing hopelessly sprung, there's no humour, either. Because we don't get a chance to share in anyone's terror or wit, we don't understand why they're in love with whomever it is they happen to fancy. Nor do we care. Neither are we dying to know the identity of the head werewolf (The Lost Boys again), and, most damningly, when the geek inherits the earth with his superpowers during a sporting event (amateur wrestling: saucy), we don't rejoice in the suffering of the beautiful. Cursed is a werewolf film that has been completely neutered by the intent of rich, venal men to sell bloodshed to children in an "acceptable" package. Not unlike George Lucas, it's a very specific genre picture that alienates and insults the only audience for it by pandering to the children (and morons) who'll like anything. What happened to Cursed happened because there are powers in the industry driven by a desire to identify and victimize people who can't help themselves. Craven certainly deserves better than this--and so do you. Originally published: February 25, 2005.