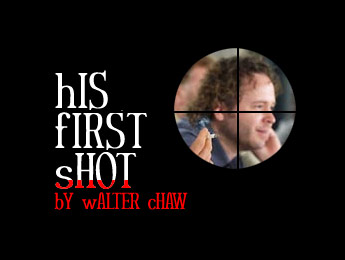 January 23, 2005|Niels Mueller is part of a graduating class at Tufts that includes Oliver Platt, Hank Azaria, and his collaborator on Tadpole, director Gary Winick, and he may have trumped them all in terms of size of splash with The Assassination of Richard Nixon. Financed in part by Alfonso Cuarón, Leonardo DiCaprio, and USC film-school buddy Alexander Payne and starring Sean Penn and Naomi Watts, Mueller's hyphenate debut was invited to show at the Cannes Film Festival and is now trickling into theatres across the nation, at the tail end of one of the most contentious election years in recent memory. Although The Assassination of Richard Nixon doesn't pack the emotional punch of Taxi Driver, the film to which it has invited the most (and not at all unfavourable) comparisons, Mueller has a good eye for composition, a good ear for dialogue (particularly in a small cameo tour de force from Michael Wincott), and a good head for the topical project. After a quick chat about the state of modern film criticism, Mr. Mueller, sounding an awful lot like Alexander Payne over the telephone, spoke at length on the subject of his first feature.

FILM FREAK CENTRAL: Tell me about the themes of disenfranchisement in your film and how they reflect the undercurrent of discomfort in our country.
NIELS MUELLER: A lot of that is accidental--at least partially unintended. It's been compounded recently, of course, in a really frightening kind of way, with a really frightening kind of intensity, but my writing partner Kevin Kennedy and I finished this screenplay in 1999. That was still the Clinton administration. And that was when Sean [Penn] first became involved with the project, but sure as Bush Jr.'s administration went on it became clearer that the film was really more a mirror of Bush's America than Clinton's. I think that speaks more to Bush's America's similarity to Nixon's America than to any kind of prescience on our parts.

Televised war, mistrust of leadership...
That's right, there's a scene we have where the television's on in the office furniture store and we see bombs dropping. Take away the foliage and we could be looking at the evening news any day today. We also have this polarized society and (laughs), God, the last thing we hear Nixon talking about is the rising prices at the gas stations.

Your film's been described as a cautionary tale of where Bush could be headed.
That's a really interesting thought. I mean, Nixon was re-elected in a landslide in 1972 and he actually had an idea of where to go after his first term: he had a mandate far beyond what Bush Jr. has offered and of course Bush's victory was considerably slimmer. Look where Nixon was in '72 in terms of popularity and then look in '74.

Why was Bush Jr. re-elected when evidence to his failures was so well documented and remarked upon?
I think that some people just don't pay any attention to what's happening and I think that a lot of people give leaders a benefit of a doubt during wartime. But people are smart when they're pushed and start paying better attention.

Watching the movie, I was reminded of Condoleeza Rice throwing up her arms and saying that no one could have imagined someone using a plane as a weapon.
Yeah, the answer to that when you watch a film like mine or do any sort of basic research that you'd imagine that the people in power would be willing and capable of doing, is that in truth everyone in the intelligence community has considered that possibility.

All the way back to WWII, in fact.
(laughs) That's right. Let's hope she does a little reading before she's officially Secretary of State. It's unbelievable. I researched the script and once Kevin and I finished a draft, we ordered up all these archival video tapes of news casts, speeches Nixon made, but the point I was going to make was that among all these CBS and NBC reports both from the night of the hijacking attempt and the aftermath once the reasons for his actions became clear, once Leonard Bernstein and other prominent Americans turned in Sam's tapes, you see Connie Chung standing in front of the White House talking about the vulnerability of Washington air space. In this very narrow respect, 9/11 was an element of déjà vu--it's the exact same conversation and I'm a little surprised not to see the modern news agencies using some of this archival footage to place the events into a more historical context.

Yeah, but the networks have been co-opted, haven't they? Consolidated so that we don't actually get the news anymore.
I'd say yes--I think you're right. I'd recommend you call up Vanderbilt University for their amazing archive of old news broadcasts. For whatever reason, they've been saving the stuff when the networks themselves weren't. And I'd take a look at the national news reporting in the early Seventies and then reporting now--we certainly have much more volume with all the cable news networks, but I tell you, the reports used to be much more serious-minded, much more academically motivated, and much less so clearly governed by just one or two monolithic interests.

Even the print media--where were THE NEW YORK TIMES and THE WASHINGTON POST before the war?
That's right, they've been left apologizing in the months and years afterwards, but they've been so drilled into accepting the maxim of entertainment for information that I think when they were required to be reputable, they were left holding their hats. Whatever forces are lurking now, it's killed news with depth and insight. And length, just the length of each report was twice that of what it is now, especially on the broadcast network. You look at the BBC newscasts and it doesn't even look like what we see anymore.

Imagine Bush being interviewed by the BBC.
(laughs) It just wouldn't happen. He can't speak off the leash. I'll be honest that he makes Nixon look like a saint in terms of how he's manipulated the public. The thing that's frightening is that ideologues like Bush and his cronies who are orchestrating this New World Order foreign policy, is that it just makes no sense. The interesting thing is how many people in the GOP have come out after the election to say that, yeah, mistakes were made and bad ones, that we're not getting out of Iraq in the foreseeable future--Republican senators are standing up now, but wouldn't it have been nice had their principals forced them to speak out earlier? But the naked manipulation of the public--it's scary.

What was the film's reception at a Cannes Festival that had Michael Moore's Fahrenheit 9/11 win the Palme d'Or?
(laughs) A great response but honestly the film wasn't done yet at that point. It was about ten-and-a-half minutes longer and it had a temp-mix, but we had some good response. Ebert said that it was one of the best of the fest. But we had a lot more mixed response, too, and they were right, we weren't finished. The response from Toronto was more consistently positive. I want to mention that Alexander [Payne] flew down to Cannes to sleep on my cot for like thirty-six hours just to lend his support to this project. He's a great friend and I'm really indebted to him.

Did you hope that your film had gotten a wider release prior to the election?
No. Honestly, I was hoping to avoid how deeply the picture's been tied to our current political climate. Again, we wrote this in 1999 and sure, the politics of it have deepened and become a mirror of our situation, but I wanted it to have its own identity, in isolation from Election 2004.

I don't think you can escape that connection, I mean, your film can only ever be viewed through that prism.
Do you think so? That's too bad. Truthfully I had no Democrat/Republican agenda in the film but this is such a polarized country that--and in any polarized situation--both sides tend to want to claim things for themselves. I hope that it's more timeless than just now, but I'll agree that it's fighting an uphill battle.

Using Sean Penn and Naomi Watts so soon after 21 Grams lent their relationship a scary sort of unspoken depth.
Thanks. Yeah, I think so, too. Sean signed up in 1999 and I was on the phone with him the fall of 2002 or early 2003 while he was shooting 21 Grams and we were talking about who was going to play that character and he said, "Look, I'm looking into a pretty powerful set of eyes on this film. Naomi's trailer's about twenty feet away, do you want me to show her the script?" And, of course, yeah! She was then and still is in incredible demand and for good reason, but she found the time to do it after she'd read the script and we all met in Los Angeles after shooting on that film and we pounded it out. What you observed is exactly what I hoped for--we didn't have much time to rehearse and didn't have time to really get the actors all that comfortable with one another, and so for Sean and Naomi to have this really raw experience of 21 Grams already under their belts, I felt, could only help my film, if only in shorthand. They were able to communicate history in the unspoken. It doesn't hurt that it's Naomi Watts and Sean Penn, either.

My favourite performances in your film, however, come from Jack Thompson and Michael Wincott.
I'm still hoping that although we've been lost in the shuffle in a lot of these early critical awards that guys like Thompson and Wincott get remembered by the Academy or the SAG. They're the mortar for this film. Let me tell you about Wincott, I mean, I was really having trouble finding the right actor for that role. If you remember, I mean, he's just onscreen for a few minutes and he's supposed to be Sean's brother and all this hurt and outrage and frustration--all of that [is] concentrated in just a few minutes. So Sean, again, came through and suggested that I look at Wincott's work. To this day, you know, I don't remember that scene, the day we shot that scene, as something I shot for the film. I mean, I remember sitting below the camera so it was behind me--but I don't remember the set, the lights, just that I felt really deeply uncomfortable intruding in on these two brothers having this intimate, painful exchange. It sounds corny, but that was how palpable that fiction was at that moment between these two guys. It felt so real--I felt privileged to be able just to point the camera and have that be the result.