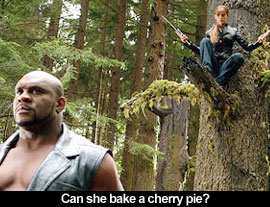 by Walter Chaw Being under siege and obsessive-compulsive disorder have together wrought a weird parallel generation in the remake Assault on Precinct 13 and sequel/comic book adaptation Elektra. In each is not only a woman who uses numbers obsessively in stressful situations, but also some sort of predicament where a gang of bad guys traps a band of good guys only to be given the business end of heroic pluck. Both are unusually ugly films with a higher-than-expected body count, and, to various degrees of success, both traffic in a paranoid marshalling of forces that comes with a fear of invasion from without. When you're panicked, drawing those you trust closer to the vest since the rest of the universe has murder in mind is the sanest recourse--even when you're aware that you're addicted, mad, or otherwise in desperate need of therapy. Early in 2005, trends are pointing to a year in which we champion isolationism, fear the marauding Hun, and start wondering if there's a blue-stater playing sheep in the quilting cotillion. Unless, that is, the blue-stater is you, and the constant threat of lynching or crucifixion has caused you to lose your mind.

Find Sarge (Ethan Hawke) and his skeleton crew--receptionist Iris (Drea de Matteo) and grizzled vet-about-to-retire Jasper (Brian Dennehy)--as they prepare to close up the decrepit Precinct 13 Police Station during a Detroit blizzard on New Year's Eve. But lo, Sarge is damaged goods, having lost his undercover crew to a botched sting--and lo, the blizzard forces a prison bus ferrying kingpin Marion Bishop (Laurence Fishburne, still doing Morpheus) to take refuge in the storm at the run-down jail along with a collection of misfits and a police shrink, Alex (Maria Bello), whose car has broken down. Before long, numerous well-armed thugs try to infiltrate Precinct 13 for Bishop's head, causing Sarge to dig deep for his long-lost heroism and hold the fort until dawn.

Dark and disturbing, this Assault on Precinct 13 honours John Carpenter's minor classic in recognizing that the pleasures of B-movies lay in their willingness to do anything for a cheap thrill. After an opening that reminds of the breathless epileptic dirt of Joe Carnahan's Narc, director Jean-François Richet takes control of his frenetic camera and presents the action with an unusual amount of clarity for a modern shake-and-bake opera. Executions are carried off with startling frequency and gore (this film has as many headshots as a Romero zombie opus) and, fascinatingly, Richet only slows the pace of the film when he genuflects before three dead-centre brain-plugs, as though they were Hindu bindi. It's like he's finding shanti, a peace that surpasses understanding, in the bloody brainings of the characters he sees as central to his paranoid metaphor. Compare these tableaux morts to a brief interlude early in the picture when three pairs of refugees speak to one another about sex, death, and addiction. Third eye musings and patchouli-scented stuff about chakras flit around in the ether while Assault on Precinct 13, grounded in viscera and spit, delivers the goods with an uncompromising nastiness.

It's a mistrustful picture, one that finds Hawke and Fishburne as Yin-Yang opposites frozen at a peak moment in obvious tribute to Kurt Russell and Keith David at the stark epilogue of another Carpenter picture, The Thing. And while the fates of its heroes and victims shouldn't have surprised, given the set-up, they end up surprising just the same because we've become lobotomized by an avalanche of cowardly PG-13 or "soft" R films into believing that a film will take the crowd-pleasingest way out. Take Elektra, for instance. Another piece of slo-mo wire fu garbage that has as its final confrontation the stupidest fight scene since Daredevil's playground flirtation, this one involving a roomful of murderous linen. Elektra continues the force-feeding of Jennifer Garner as a superstar capable of carrying a D.O.A. franchise and gives analogous adult contemporary television drama god Goran Visnjic co-pallbearer duties.

It seems that Elektra (Garner) survived Daredevil (unlike Ben Affleck) to be resurrected sometime in the muddy backstory by blind sensei Stick (Terence Stamp) and trained to beat up a bunch of faceless Asian sparring buddies in an open pagoda on the side of a mountain. Who Elektra is besides an assassin with a tragic past is besides the point--as pointless as the stunningly banal subplot that sees her developing maternal instincts for neighbour Mark's (Visnjic) irritating-beyond-measure daughter Abby (Kirstin Prout), who, in a Jewel of the Nile twist, is apparently someone the bad guys want to get ahold of really badly. It should matter that the villains Elektra fights all have special powers (Tattoo (Chris Ackerman), alas, doesn't spot any planes), but as no two scenes in the film cohere, any hopes for "coolness" are treated most cruelly.

A somehow stupider version of Mortal Kombat, Elektra contains fight sequences edited so poorly that they're impossible to follow and is directed so shockingly badly that director Rob Bowman's nifty Reign of Fire begins to look like a serendipitous anomaly. And because the screenplay is beyond awful, the film feels like a whole hour is missing from the front or back despite a 100-minute running time. Garner's performance is a lot like that of the murderous bimbot from Wes Craven's Deadly Friend (and, indeed, she shares some of that robot's creation story): she lumbers around like she's been dipped in wax and once or twice inexplicably walks towards a wall in an alley or hangs up the cell phone at the moment she's about to receive information that will lead her to the next part of the film. Elektra is unfiltered dross, an unqualified disaster that finds Garner and the hateful Prout in matching bushy bangs and breathy attitudes in a misguided attempt to draw a line between the two characters visually and with reams of deadening dialogue. Idiotic and monotonous, Elektra is real work to sit through.