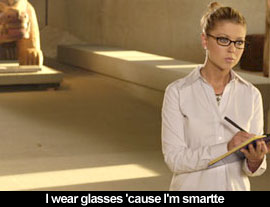 by Walter Chaw Edward Carnby (Christian Slater) is a "paranormal investigator," which in Uwe Boll's visual vernacular means that he dresses like Highlander Duncan MacLeod and lives in MacLeod's apartment, too. Chip through the film's hard veneer of unsightly stupidity (it looks a lot like a Jess Franco film shot on a smaller budget) and you'll begin to unearth a narrative of sorts concerning an ancient Indian tribe that opened a gateway between the light and dark worlds; most of this is imparted by an interminable opening scrawl that's read aloud because director Uwe Boll, himself illiterate, is sympathetic with his target audience, though we get other clues to a plot from an orphan in flashback who, unlike his twenty peers, escapes possession from, um, some bad thing, and a mad scientist Professor Hudgins (Mathew Walker) and his brilliant (snicker) assistant Aline (Tara Reid) trying to collect a bunch of relics so that they can, what, open the gateway between dark and light? I don't know. Casting Reid as a smart person is, by the way, the biggest miscalculation since casting Denise Richards as a nuclear physicist and Kevin Costner as a doctor, although it is admittedly amusing watching her struggle through phrases like "molecular composition."

As we join the action, Edward is almost killed in a low-speed taxi chase that ends in a sketched-out version of the ice-block fight scene from Bruce Lee's The Big Boss. He reunites with former flame Aline in a scene stolen from Raiders of the Lost Ark and reveals that he used to be a member of a super-secret government agency whose primary purpose was to kill those things from The Relic that are supposed to be invisible but seem pretty visible to me. Lots of shooting, lots of dialogue like "They're flanking us!" and "Don't be insane!", and a subplot about human "sleepers" (remember the possessed orphans?)--who, as adults, abandon their families to run around collecting multiple gunshots--share time with edits so mis-timed that a sex scene (no context, nudity, or purpose) appears out of nowhere in the middle of the film without set-up, then fades away without repercussion. Best not to even wonder about a ship that has its entire crew eaten by monsters yet docks without incident at a little jetty a few hours later, or military leader Dorff's magnificent mullet, or why the gold-fearing beasts would make a gold mine their home base. (Sort of like heartburn hiding in a sausage mine.) Boll shoots the action in as epileptic and nonsensical a fashion as possible, staging one scene entirely in the dark with only the occasional muzzle flash to illuminate the bad CGI monsters, while the final solution and epilogue are so incoherent that they could almost qualify as surrealism.

Alone in the Dark is on the short list of Worst Movies Ever Made. Not offensive, understand, just terrible. It's worse than Battlefield Earth, Catwoman, and the Troll movies, and it's on a par with Manos Hands of Fate, Gymkata, and Crippled Masters. In fact, it's a lot like an Ed Wood film, in that Boll is an idiot who loves all his toxic seepage like a father loves his retarded, ugly children. Meanwhile, the performances turned in by Slater, Dorff, and Reid (it must be said that she runs like a nutcracker) should earn each of them a good, sound, cosmic beating. Based on a popular Atari videogame (itself inspired by H.P. Lovecraft's Cthulhu Mythos), Alone in the Dark is an incomprehensible goulash of a picture--indeed, it's so bad that it's sort of existentially funny in a "What am I doing here?" kind of way, and, were one perverse enough to do it, one could approach the picture as a satire of bad horror movies. Bad horror movies like the simultaneously opening Hide and Seek, say.

Super-shrink David Calloway (Robert De Niro) has an unrestful house. His wife (Amy Irving) is suicidal and his daughter Emily (Dakota Fanning) is creepy, and when his wife offs herself, he bundles up his pallid, corpse-like little moppet and spirits her out to upstate New York to begin her recovery in almost total isolation during winter at a summer resort community. Resembling the Sally doll from A Nightmare Before Christmas, Emily begins to behave like Regan from The Exorcist, talking to an invisible friend that says nasty things and causes her to behave poorly in front of guests (she even tells a hapless, Stephen King-esque local constable (Dylan Baker) that he's about to die). While the title sequence tune by composer John Ottman is an obvious homage to the lilting lullaby that opens Rosemary's Baby, the scenes establishing David and Emily's escape into the country are straight ports from Bryan Forbes's The Stepford Wives. A dinner sequence with David's hastily-sketched love interest Elizabeth (Elisabeth Shue) is taken from Beetlejuice (and Emily's wardrobe is an ape on Wednesday Addams's), the opening car ride to the remote destination sprinkled with liberal flashes of a doomed New Year's Eve party is a flat rip-off of The Shining, and the shower curtain/butcher knife stuff as well as most of the ridiculous final reel is Psycho all over again. The obvious comparisons, though, are to Secret Window, Gore Verbinski's The Ring, and De Niro's own Godsend--put the three together with Adventures in Babysitting and you've got Hide and Seek.

So it's extremely derivative, sure, but prior to its last half-hour, it's also sort of amusing as a genre "Where's Waldo?". It's minimally diverting to guess exactly when the family pet will get the axe, when the insane little kid's twisted drawings will catch the attention of the grown-ups, when the inevitable twist that steers the film away from actually being supernatural will reveal itself to an audience already about ten steps ahead of it--and so on and so forth. It continues 2005's early obsession with home invasion and falling under siege in broken sanctuaries, and it uses mirrors, paths into the woods, and dark hollows with what at first appears to be an admirable level of Yeatsian "Stolen Child" smarts. Until its finale, in fact, Hide and Seek is a completely harmless mainstream picture that seems to know what's going to moderately discomfit a mainstream audience--and it goes about its plodding business with high production values, an attractive cast (including Famke Janssen), and a cadaverous youngster. It even features an old Elmer and Daffy cartoon that works fantastically well to create a mood of childhood lost and the violence embedded in rituals of maturation.

But then there's that ending. Always familiar, Hide and Seek finally becomes tiresome and, more, disturbingly nihilistic as this little girl, in whom we've become at least a little invested, is subjected to sights and experiences that no child should be expected to endure. The closing image is one of the most snarky, unpleasant, and cruel you can imagine--all in the service of making sport of a little one's pain and sending everyone to their cars with a laugh. If Hide and Seek is light years superior to Alone in the Dark in every other aspect, it's worse in just this one: Alone in the Dark sucks mightily, but it's merely inept; Hide and Seek exposes itself at its olly-olly-oxen-free moment as more than a little mean.

In the Realms of the Unreal
*½/****
directed by Jessica Yu

by Bill Chambers Jessica Yu's In the Realms of the Unreal is a documentary treatment of the life and art of Henry Darger, who for over forty years blotted out the world in favour of his imagination so successfully that his magnum opus, a 15,000-page illustrated novel depicting the rebellion of child slaves (often-naked hermaphrodites collectively known as the "Vivian Girls"), remained a secret until shortly before his death. The movie, alas, is the über-recluse's worst nightmare, a work of spectacular invasiveness that subjects Darger's infamous watercolors and flamboyant prose, i.e., his very sanctuary, to reductive multi-plane animation techniques and cloying Larry Pine narration, respectively. That a number of In the Realms of the Unreal's reviews have shrugged off the paintings' paedophilic content confirms the anaesthetizing impact of not just Yu's precious gaze, but also the would-be subversive presence of principal narrator Dakota Fanning--and the entire film proceeds along a line of soft-pedalled rubbernecking. To that end, Yu eschewed the expert opinions of people from the art and psychiatric communities in favour of testimonials from Darger's opportunistic landlord and the like, people fascinated by their proximity to his weirdness; "Imagine John Nash of A Beautiful Mind had been an artist instead of a mathemetician, a janitor instead of a scholar--that's a rough sketch of Henry Darger," surmised Richard Roeper on last week's edition of "Ebert & Roeper". No, it's not--but it is a remark characteristic of the prosaic, frequently vacuous insights that stud In the Realms of the Unreal, which only help to immortalize Darger less as an artist than as a pariah. Shame on Yu. Originally published: January 28, 2005.