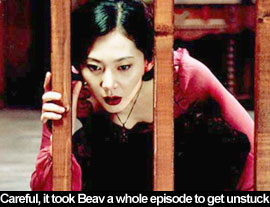 by Walter Chaw Every frame of Kim Ji-Woon's A Tale of Two Sisters (Janghwa, Hongryeon) is like taking a dip in the violet pools of A Place in the Sun-era Elizabeth Taylor's eyes. It's sensuous--and the characters that inhabit the velvet, silk, and wood environments put out their hands to touch, dangle their feet off the end of a wharf in the soft green water below, lay their faces against cool blue sheets touched by crepuscular shadows. This is filmmaking as tactile exercise, and the atmosphere in which Kim houses his debauched delights is something like smothering beneath the tender insistence of a satin glove. A Tale of Two Sisters is based on an old Korean folktale of two sisters so abused by the capriciousness of the world that they're forced to take refuge in one another and within themselves. In tone and execution, it feels like Heavenly Creatures; in its tale of an evil stepmother and a haunted castle by the lake in the woods, it has the heft of classic German fairytales.

A Tale of Two Sisters is rapture. Relentless, terrifying, inexorable, it opens with the return of Soo-mi (Lim su-Jeong) to her family's cottage after some time away at what we glean to be a mental institution. Acccompanying her home is sister Soo-yeon (Mun Geon-yeong) and father Moo-hyeon (Kim Kap-su), with her beautiful young stepmother Eun-joo (Yum Jung-ah) waiting for the trio when they get there. It's not long before the dreaming starts: Soo-mi sees an apparition at the foot of her bed in one of the most frightening reveals since the appearance of the upstairs neighbour in Dark Water, and director Kim reveals an extraordinarily deft hand balancing the delicate surface tension of suspense with a thematic richness that earns the picture a thesis or two somewhere down the line. It's a gynaecological horror film, a menstrual anxiety movie, a ghost story, a travelogue of sin and guilt, and a coming-of-age melodrama--all of it wrapped around a feeling of fecundity that's almost visceral.

Kim makes astonishing use of negative space, of the dark in closets and under sinks, along rides home and just out of sight around the corner. The camera's point-of-view is detached, ethereal, and unconcerned--none of those flash-pans and whip-cuts that most modern horror use to simulate tension and affect surprise disgrace this movie, while the way that Kim allows his characters to float in and out of frame reminds of a Takeshi Kitano picture. And that idea of negative space is well in keeping with traditional psychoanalytic formulations of women, the vagina and womb finding evocation in horror films as tunnels, basements, crypts, and, in more than a few instances, goop-covered, consumptive tunnels (Poltergeist, Alien). When Soon-mi's nightmare squats over her, a rivulet of black blood runs down its leg and a hand reaches down from its crotch. It's a dream of a devouring mother, of an awful kind of fertility. We realize as we watch that only the women in the film experience the dislocations of the piece.

A Tale of Two Sisters also attacks traditionally feminine social conventions: intruding on a dinner scene with a rude absurdity; pulling discussions of cuckolding and menstruation from whisper to public discourse; invading the house and the marital bond in the guise of familial bonhomie; and playing fast and loose with the identities of the three women of the piece so that they are, by the end, inextricably intertwined with one another. It's the essence of Ingmar Bergman's Persona, flirting with existential horror and post-modern discomfort to go along with its more traditional gothic underpinnings. For a long while, I wondered if one of the girls was actually the child version of the stepmother--then I wondered if the stepmother was hallucinating the girls, or if the father was hallucinating everything. Because A Tale of Two Sisters comes at a time when the nihilism of Asian horror is finding a sympathetic zeitgeistin the United States, that kind of active conjecture is unavoidable, but the way that it buggers pat explanations, even when the cards are on the table, speaks to the brilliance of the piece. Ultimately, what the picture most resembles is a Henry James novel, that feeling of laden Victoriana oozing not just from the opulent settings, but also from the sexual leviathans coiling and uncoiling in the subtext. It's a film about wetness and the underneath, about the way that girls become women, and, at its end, about loyalty, family, responsibility, and the protean, unshakeable, hopeless grandeur of love.