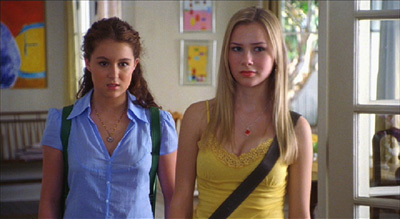 by Walter Chaw Okay, I admit it: I'm fascinated by Joe Nussbaum's squirmy, sleazy Sleepover, a comedy for kids so queasy in its conception and execution that I'm reasonably certain it qualifies as child abuse in most states. It's not as bad as the Olsen Twins' New York Minute, mainly because it isn't disgustingly racist in addition to disturbingly paedophilic--but I have a sneaking suspicion that Sleepover engages in with some measure of cunning what New York Minute engages in recklessly. It's thus better than the evil 13 Going on 30 as well, though not nearly as good as the only so-so Mean Girls, marking it as one of those pieces of swill whose chief claim to glory is that it's subversive for adult audiences. Tragically, Sleepover is pitched at 'tweens, and the only adults likely to see it are either parents stupid enough to rent it to watch with their children or critics stupid enough to review it themselves in lieu of running Kevin Thomas's predictably lonesome positive review off the wire.

The hook is a scavenger hunt, the players are a group of proto-Heathers led by Julie (Alexa Vega), and the stakes are the cutest guy at the dance. Along the way, Julie steals a glimpse of her dream-boy's pubescent undercarriage while hiding out in his bathroom, weirdly evoking the shower-masturbation scene that opens Dressed to Kill in the process and setting the stage for misogyny that's more at home in slasher cinema. An early moment in which an eighth-grader is kicked out of her boyfriend's car because she refuses to fulfill her promise to have sex with him upon "graduation" stands as one of the most unjustly uncommented-upon scenes in movie history. Smooth Talk as a light comedy for the babysitters club, Sleepover comes armed complete with the same confused message about self-image as Shrek, its requisite fat girl finding her fat guy to the patronizing approval of our heroine. ("Someone for everyone," marvels the pretty girl beholding the ugly girl mating.) Even better is the band's choice of song, Oingo Boingo's classic "We Close Our Eyes," for the fat couple's dance--lowered expectations, the bitterest pill. Compared with the hero-girl's dance song (which contains the lyric "Open your eyes/Take it all in"), this suggests to me that there's intentionality in the mixed messages of the piece--that for ill and for ill, somebody somewhere along the way in Sleepover's development had a pretty good idea of--and a manic enthusiasm for--the kind of venomous gruel they were spitting out.

Our four fourteen-year-old "hotties" finally get their comeuppance next to a dumpster, although the cutest girl has already had a moment wherein she's partially redeemed according to the loose moral boundaries established by the picture. The adults are either clueless or so clued-in as to be pathologically interested in the intimate machinations of youngsters. And it all ends at the big dance, with Carrie, sadly, not showing up to slaughter the revellers. What really gets me is that the sensationally uncool Julie (she still listens to the Spice Girls) sets up a cyberdate with someone who ends up being her principal (shades of Closer)--and the principal agrees to have his picture taken with the underage minx, holding a drink. Approaching Sleepover with any sort of sensitivity or intelligence is an act of extreme masochism: It was made by adults with a pretty appalling view of little girls as not only oversexed and deceptive, but also dumb as a bag of hammers. Both suppositions were handily defeated by the speed with which Sleepover shot through theatres last summer.

THE DVD
MGM slimes Sleepover onto DVD in a very nice-looking 1.83:1 anamorphic widescreen transfer. Sharp yet remarkably free of edge enhancement, the picture nonetheless appears to have been shot by a student director on a tight leash, and my goodness, so it was. The Dolby Digital 5.1 soundmix is ear-splittingly clear, to the extent that I wanted a lot to turn it down (and off); switching over to the French track at one point, I was impressed, as I often am, at how much improved awful films become in the Gallic tongue. In any case, the wall-to-wall teenybopper soundtrack is iPod clear. Nussbaum, Vega, and Vega's co-stars Mika Boorem, Scout Taylor-Compton, and Kallie Flynn Childress collaborate for an extraordinarily irritating commentary track that doesn't say much about the movie but does say a lot about what it might be like to have a 90-minute conversation with four adolescents and a guy too obviously grateful for the opportunity to direct a film. It's horrible--to the point that it's nearly preferable to watch Sleepover with its original audio. I was impressed, however, that the young women seem to realize they were in something extraordinarily derivative.

"A Guide to the Perfect Sleepover" (11 mins.) is your typical mishmash of A- and B-roll footage and junket interviews posing as a making-of documentary. Having previously won affection for his short film George Lucas in Love, Nussbaum instantly earns derision for his zealous non-irony in the piece, which actually has one of the helium-voiced vixens express that there were a lot of laughs followed close by a chorus of giggling. I can't explain it, but I wanted to jam a knitting needle into my ear. A quartet of ninety-second interview/blurbs with each of the principals (Vega, Boorem, Taylor-Compton, Childress) washes out as outtakes from the docu that collectively mount another strong case for preventing teenage starlets from trying to articulate what they like best about production. "Ready, Set, Action!" (1 min.), meanwhile, is a bizarre montage of the girls posing for publicity stills and the like that could easily be grafted onto any of the other short features, but then you'd have one less selection on the Special Features menu. "Sleepover Confessions" (3 mins.) reveals a few of the deep dark secrets of filming Sleepover, such as how the actress playing the mother (Jane Lynch) once snuck out of a sleepover to perform a mock-Mass at her local church. See, that should've been the movie, not this steaming pile.

"Gag Reel" (5 mins.) is composed of a lot of shots of Vega sticking out her tongue and screwing up her face in various other ways when she can't remember her lines, making me want to punch her right in the throat. If you can endure these bloopers for longer than forty-seconds without seriously reconsidering the wisdom of procreation, you need to be forcibly neutered. Rounding out the disc: a photo gallery, plus a trailer for Sleepover along with trailers for Uptown Girls, Good Boy!, Agent Cody Banks, Legally Blonde 2: Red, White & Blonde, and The Legend of Johnny Lingo. The Agent Cody Banks and Legally Blonde 2 previews cue up automatically--which, considered scatologically, makes a lot of sense. There's also a preview for something called "Hi-5" featuring five older teens singing and dancing à la The Wiggles, their respective talents apparently defined by their race and gender. White redneck girl struggles with her literacy, the Mexican guy likes cars, the Asian chick is good at math, and so on--I'd find it shocking if it weren't pretty much par for the Power Rangers course. Originally published: December 1, 2004.