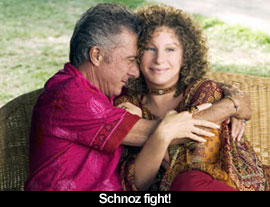 by Walter Chaw There's a scene towards the end of Jay Roach's pathologically unfunny Meet the Fockers where Dustin Hoffman and Robert De Niro sit across from each other in a front-yard bower and prepare to exchange dialogue. Thirty years ago, such a tableau would have been cause for held breath and tingles up and down; today, it's just two miserable old has-beens cashing a paycheck borrowed against their dimming reputations and acting like clowns for the bemusement of the very same audience of folks who used to demand something from their entertainment. Something like energy, for instance, or invention, or--perish the notion--insight into the world of thought. Meet the Fockers throws itself onto the growing pyre of disposable gag reels built entirely on humiliation and scatology. Urine, feces, vasectomies, foreskins, senior citizens dry-humping to the nasal exhortations of a muumuu-clad Barbra Streisand while somewhere else a cat is flushing a little dog down a toilet. A toddler (Spencer and Bradley Pickren) signals for milk every time he sees a woman with large breasts, says "asshole" a lot, and, as if that's insufficient, makes lewd sucking faces, sticks out his tongue, and appears to mime cunnilingus. He's almost as adorable as Ben Stiller, sliding comfortably now into the role of eternal jackass and requisite redheaded stepchild.

Not unsavoury enough? There's also a subplot about an illegitimate child of fifteen being publicly confronted with the identity of his real father and then summarily discarded for the rest of the film to lick his psychic wounds on his own. (A strange thing to do to the little fella, you'll agree, in a light-hearted comedy touting the importance of family.) There's a lot, yet still too little, made of a fake breast that Robert De Niro's character has fashioned from his daughter's breast so that he can approximate breastfeeding (though the film balks at actually paying off the sight gag with the sight of him doing it) and a bit of unkindness towards southern policemen (Tim Blake Nelson, deserving better), and a good eighty-percent of the alleged humour of this stillbirth is invested in "Focker" sounding a lot like "Fucker" and people at a Focker family reunion having names like "Dom" which sounds like "Dumb," "Randy" which sounds like "Randy," and "Horny" which sounds like someone's already run out of ideas for how to stretch a one-word punchline into a feature-length film. So, without anything to do or say, the filmmakers ask your indulgence as they cram the lacunae with dog reaction shots, cat reaction shots, baby reaction shots, dogs humping legs and other things shots, cat flushing the toilet and having toilet paper stuck to its paw shots, and, of course, Barbra Streisand on speed riding De Niro like the world's biggest (and loudest) jockey on the world's craziest steed, massaging Blythe Danner, and never, ever, not even for a second, finding it prudent to shut her kvetch hole.

But what's the movie about? It's about Gaylord Focker (Stiller) and his waxwork fiancée Pam (Teri Polo), having survived her parents (De Niro, Danner) in the first film, forcing the three of them to spend a weekend with Gaylord's (call me "Greg") parents (Hoffman, Streisand). The joke is that De Niro is a humourless ex-CIA bully and that Hoffman is a free-spirit hippie wild child: the one given to planting bugs and spy cameras and the other given to planting big wet kisses on prospective in-laws because demonstrative and loving men are hilarious. The prologue finds Greg, in his capacity as an RN, helping a Russian couple through the birth of their son, which will naturally lead to Meet the Fockers upping the hilarity ante by adding a toddler character and somewhere down the line a pregnancy intrigue that's treated like an Enigma cipher. In between, God help us, find Hoffman eating whipped cream off Babs's cleavage whilst wearing an organ grinder's hat (in retrospect the only way to do such a thing), Babs saying things like "meshuggenah" and "boobala" as she throws her hands around in a scary imitation of those creepy Fluck and Law puppets, and a whole set-piece where De Niro sidles into a futuristic control centre and plots wrongdoing, raising the grim spectre of his Fearless Leader from The Adventures of Rocky and Bullwinkle in the process.

It's constipated in the way of a film whose director has completely lost control of his cast is constipated--I'd be willing to wager that the aging A-listers, sure of their comedic skills (what, because of Ishtar? Analyze That? Yentl?), decided to improvise a lot of their own lines. I mean, the pacing of it, the cadence of the dialogue and the fact that there's a sort of panicked wall of noise throughout gives it away. Meet the Fockers is embarrassingly bad; with no place to begin and no place to end, it tries to wrap it all up with a series of perfunctory non sequitur climaxes that would each by themselves have betrayed how lost the filmmakers were. There's a wedding, a long dance scene at the wedding, a bit with the dog and cat getting along, and a weird end-credits sequence that gives the toddler some more opportunities to mug at his mother just to the left of the camera. The only thing missing is a courtroom scene and a post-script informing us of the characters' fates, leaving room open, of course, for the eagerly-awaited conclusion to the Parent Focker trilogy. Here's hoping that when that blessed day arrives, I'll be good and dead. Originally published: December 22, 2004.