A Series of Unfortunate Events
**½/****
starring Jim Carrey, Jude Law, Liam Aiken, Emily Browning
screenplay by Robert Gordon, based on the books The Bad Beginning, The Reptile Room, and The Wide Window by "Lemony Snicket"
directed by Brad Silberling 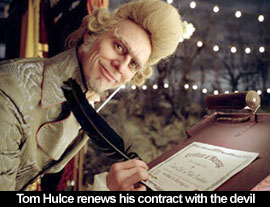 by Walter Chaw The best children's entertainments accentuate a child's strengths, encouraging the pursuit of aptitude and bliss instead of impossible pipe dreams. It's the lesson of The Incredibles, one of the bravest, most subversive films the year--and it seems to be the lesson of Lemony Snicket's A Series of Unfortunate Events as well until the picture caves in to kid-flick conventions and worse. But while it's humming along with the freshly-orphaned Baudelaires--Violet (Emily Browning), Klaus (Liam Aiken), and little Sunny (Kara and Shelby Hoffman)--doing what they do best (Violet the engineer, Klaus the reader, Sunny the biter), Lemony Snicket, with its gothic sets and grotesque gallery of rogues, offers up a brilliant antidote to the saccharine blather of traditional holiday fare. Fleetingly effective or no, it's a shot of insulin in a season that generally offers up bloated prestige items for the grown-ups and freakishly genial, accidentally perverse fare for the kiddies.

A mysterious fire kills, Harry Potter-like, the Baudelaires' parents, leaving them in the care of a succession of guardians, the first of whom, Count Olaf (Jim Carrey), turns out to be a homicidal maniac bent on killing the children to collect on their parents' inheritance. Escaping into the arms of first herpetologist Uncle Monty (Billy Connolly), then agoraphobe Aunt Josephine (Meryl Streep), whose house is balanced delightfully atop a series of spidery struts on the edge of a precipitous drop, the three orphans prove unable to elude Olaf for long, leading them to conclude that the only things they can trust in this world are themselves and their individual talents. It's a terrible shame, then, that at the film's climax, Violet and Sunny are painted as inexplicably helpless, with Klaus taking on the Violet role of problem-solver ("What would Violet do?" he chants as a mantra) and the Sunny role of physical intimidator. In one stroke, and at its most important moment, Lemony Snicket becomes a boys adventure complete with damsels in distress.

Based on the first three entries in a series of crafty novellas by a pseudonymous Daniel Handler, Lemony Snicket is, to its credit, cruel and occasionally frightening, yet too much of its action stands apart from its themes. With the exception of a neat train-tracks escape that takes advantage of each of the Baudelaires' talents (and a quieter scene in which Violet creates a haven for the children in the attic of their prison), the picture feels like a Dickensian drama on the one hand and a triumph of special effects and set design on the other. (A potentially fascinating reveal of all the fears of terminally-frightened Aunt Josephine coming to pass one right after the other is squandered, for instance, to the baser instincts of cheap gags and in-camera effects work.) The performances are the film's saving grace: the children are exceptionally well-heeled; Carrey, donning a variety of hammy disguises (Olaf fancies himself a master thespian), is more or less restrained to a medium-sized cameo; and Streep steals the show in her brief screentime.

Following up Moonlight Mile with another memento mori, Brad Silberling steadfastly resists the epileptic flash-edits that sink this kind of big-budget ship, but his direction is ultimately workmanlike. (And although I didn't particularly like the conceit of subtitling the baby's babbles, I'll allow that it's better than the Look Who's Talking solution.) What's missing from the film that's present in Handler's books is the feeling of entropy being held only tenuously at bay by the bonds of family and the ingenuity of children. Without that, Lemony Snicket's A Series of Unfortunate Events is a fabulously-outfitted sideshow attraction without much going on under the big top: all circus, precious little bread. For a glimpse at the film that could have been, stay for the Edward Gorey-inspired end credits--they're fantastic.