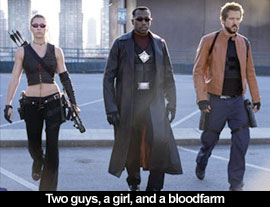 by Walter Chaw A genuinely bad film, Blade: Trinity gains a little currency by banking on some of the hot topics in our cultural diaspora (blacks vs. whites, rich vs. poor, privileged vs. ghettoized) as well as sporting a pretty heady fascination with progeny and parentage. But it's not nearly enough to forgive the film's excrescent dialogue, tepid action scenes, or asinine performances. It finds David S. Goyer, writer of all three Blade films in addition to Alex Proyas's modern classic Dark City, at the helm of a feature for the second time having learned nothing from Proyas and Blade II's Guillermo Del Toro. When the director of an action film takes pains to turn off the lights right before each action scene is set to begin, begin to worry. If Goyer does anything, he confirms the idea that if you're not a brilliant writer (like Wes Anderson, say), then you probably shouldn't be directing the mediocre scripts you've written (like George Lucas, say), because writers who usher their own scripts to the screen tend to think of their word as law instead of as a good place to start. For the first time in this series, I was bored, disinterested, and didn't get any kind of blaxploitation charge out of Wesley Snipes cool-mutha-shut-yo-mouf method-spawned half-vampire avenger. If Blade: Trinity is the end of the cycle, it came one movie too late.

Blade (Snipes) is still fighting vampires with Whistler (Kris Kristofferson, approximating a chewed piece of beef jerky), his trusty Q, by his side. Introduced for a quick cameo is the Blade-mobile; introduced for the long haul are Whistler's daughter Abby (Jessica Biel) and her sidekick King (Ryan Reynolds), part of a hastily-sketched vampire-hunting "cell" (ah, post-9/11 terminology--ain't it grand?) calling themselves "Nightstalkers"--"We were going to call ourselves the 'Care Bears' but it was taken," says smarmy King, who, as the requisite wise-cracking comic relief dude, can never quite find it within himself to shut up. It's more than just a personal distaste for the professional piece of oily plastic that is Reynolds, but an observation that his presence disrupts the carefully-cultivated mood of kitsch seriousness that makes the bon mots in the first two films ("Some motherfuckers are always trying to ice skate uphill," for instance) understandable in the spirit of the thing. Whenever King cracks wise (and King only cracks wise), the movie screeches to a halt and waits for the laughter sign to stop flashing. The first two Blade films often inspired jubilant laughter--the third inspires the snarky kind.

Just like Alien vs. Predator and The Exorcist: The Beginning (and even National Treasure, to a degree), Blade: Trinity begins with the unearthing of a ziggurat that houses an over-dressed ancient evil. It's Dracula (the abhorrent Dominic Purcell), recast from a Transylvanian dandy into a haggis'd-up soccer hooligan with a Predator mouth (and Gary Oldman's armour from Francis Coppola's bloodsucker), the source of all evil and whose blood is necessary for a vampire-killing biological weapon to work its magic. Goyer takes the escape hatch of visual trickery to save himself from having to write a non-convoluted narrative peopled by characters that matter. Left, thematically speaking, is a moment early on when science is demeaned in slasher-movie style (a white shrink is made the patsy), in addition to a reference to Frank Baum's Emerald City of Oz and a peculiar, extended clip from Leslie Stevens's Incubus that walks the line between pretentious and just weird. Pretentious and weird being, incidentally, the land where we find poor Parker Posey, once an indie darling, now talking like a teenage girl with a retainer and walking as though it's her first time in heels. She's the head of the vampire team that resurrects their fearless leader (shades of Underworld, and it bears mentioning that if you're going to rip-off pictures, you should rip-off good ones), ostensibly for the sole purpose of killing that pesky Blade--oh, and exposing him to a lot of slow-motion walking, walls collapsing a second or two before the event that causes them to collapse occurs, and loud music.

The prenatal contamination anxiety of the original and the Prodigal Son story of the second find themselves recycled and diminished in Blade: Trinity. Dracula throws a baby, a quartet of vampire thugs snatch a baby, and of course it's revealed that Whistler fathered a baby. (Then there's the little girl of a blind member of the Nightstalkers (Natasha Lyonne) who functions as the erstwhile Newt character until she vanishes without a trace for the final reel.) But none of it amounts to a hill of beans in a wider sense: there's no drama in any of the relationships--and as little tension to any of the antagonisms as there is tenderness in any of the allegiances. The real drama, in fact, unfolds outside of the text, as the quiet murmur around Wesley Snipes declining to do any publicity for his baby franchise should resolve itself post-screening as definitive statement that for all his shortcomings, Snipes is no fool. Blade: Trinity is an orphaned project: abandoned by Del Toro once Hellboy got the go-ahead (and compare Hellboy to Blade: Trinity for a little perspective), now abandoned by the man, Snipes, most responsible for the unnatural life of his Wayfarer spawn. A sad way to end the series--not with a bang, but with a simper. Originally published: December 8, 2004.