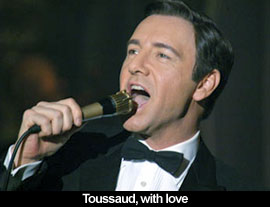 by Walter Chaw In Beyond the Sea, Kevin Spacey as Bobby Darin talks to the ghost of his kid self, a pint-sized Virgil leading Spacey's decrepit Dante into the hell of vanity projects. It's a flick that apes All that Jazz the way De-Lovely aped All that Jazz (that is: sickly, with a bad limp), with an aged Darin looking back on his life as though it were all a giant movie set. "Ain't he too old to play Bobby Darin?" a reporter in the film asks while Bobby Darin directs his own fictional auto-biopic. "He was born to play Bobby Darin!" responds an angry Bob Hoskins as Bobby Darin's father, who, one part Brooklyn hood and one part Russian bear, acts as the artist surrogate trying to pre-empt the chief criticism most will have of this creepy exercise in flaccid masturbation. Truth is, Beyond the Sea is the Kevin Spacey story without as much closeted homosexuality and just the same amount of delusions of grandeur and aspirations towards artistic martyrdom. It lacks passion and joy, replacing them both with something that smells a lot like mid-life crisis.

Consider that Spacey's teen-idol Darin (who never looks a day over forty-five), as he's wooing lousy-with-virginity Sandra Dee (Kate Bosworth, 21 going on 12), looks like a combover lothario with designs on the babysitter. (It's a commercial for Viagra and statutory indiscretion--the "big bad wolf" scene from Scorsese's Cape Fear reconfigured as a light musical comedy.) Never mentioned is the fact that at the time of their marriage, Darin was twenty-four and Dee was sixteen. Too unsavoury, I guess, but why, then, a consummation scene that plays like a good old fashioned medieval prima nocte chamber rape, and why not the revelation that Dee's age was always inflated by two years to aid her career so that Dee's nostrils-flaring mother (Greta Scacchi) has a reason to panic beyond tired showbiz-mom comic relief? That lack of care and depth dooms Beyond the Sea to the rubbish heap of megalomaniacal ego trips masquerading as heartfelt hagiography. It's sappy, sure, but it's also a load of crap in the same way as De-Lovely: both seek to mine something wholesome and uplifting from something sordid and unseemly.

As little kid Darin (William Ullrich, begging for a punch in the throat) suffers in the throes of rheumatic fever and the resultant heart damage that will lead to a lifetime of frailty and an early death, his dear old ma (Brenda Blethyn) trundles in an old upright piano delivered to their hovel on the corner of Liam and Angela's Ashes. Montage breaks out, the streets outside erupt in a badly choreographed jitterbugging, and Spacey, as he will do fourteen times, breaks out his scary Darin imitation while David Lynch-ian bobbysoxers skitter around in counterstep.

But for all its Technicolor vibrancy and canned energy, Beyond the Sea spends most of its time in medium shot--partly, probably, to hide Spacey's corpse-like visage, though more than likely a result of Spacey using the same part of his brain to direct as to cast himself in the role of a man less than half his age (and who was nine years younger than Spacey when he died, besides). Credited with no fewer than three hats on this project (co-writer, director, star), Spacey embarrasses himself in two of them and acquits himself decently in the third as an animatronic wax effigy on the Hall of Swingers ride. It's difficult to articulate every way that Beyond the Sea goes bad; sufficed to say that the only thing that keeps it from being a kitsch classic on a par with Oliver Stone's Alexander is that we're too busy cringing to laugh. Originally published: December 29, 2004.