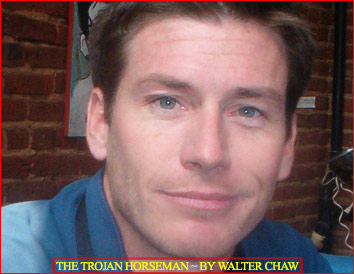 November 21, 2004|There's a scene in Mark Brian Smith and Tony Montana's new documentary Overnight that has already become notorious: asked to reimburse fellow wanderers on the weird odyssey of certified platinum dipshit Troy Duffy (he of The Boondocks Saints infamy), Duffy responds: "You deserve it, but you're not going to get it." Ah, a man of the people, verily. A dead ringer for "Trading Spaces"/"Extreme Makeover: Home Edition" carpenter Ty Pennington, Smith seems like an affable, reasonable guy, which begs the question of how, exactly, he got caught up in the dank updraft of a psychopathic loser like Duffy--a guy who, given the proverbial keys to the Hollywood executive washroom, spent months on end complaining about everything with a level of delusion and hate that would be funny if it weren't real. (When Roger Ebert is telling you on national television to get help for your drinking, there's definitely something amiss.) I had the same reaction to Overnight that I had to Chris Smith's (no relation) American Movie: I wondered for a long while whether this was a mockumentary. But it's not--more, it's actually a cleverly-conceived, smartly-edited film in its own right.

Mr. Smith, in town for the 27th Starz Denver International Film Festival, was eager to talk shop as he sat down in a cavernous warehouse space decked out with sofas, a wet bar, and snack tables to serve as the press suite for this year's event. Knowledgeable, well-spoken, and level-headed about having a well-received picture, he's also unsurprisingly clear-eyed about the pretensions of some of his fellow festival darlings. Close association with dangerous delusions of grandeur breeds clarity, I guess; having dealt with not only Duffy but the odd, prefrontal clan of Duffy supporters and Boondocks Saints fans as well, Mark Brian Smith has already served harder time than most.

At what point did he get really belligerent?
You know, when the story didn't end his way. When he realized that Miramax was backing out, that it was going straight to video if anywhere, and the music was not taking off and the label was going to drop his band. That's when Troy tried to turn the tables and threatened us. But he did it the way that he always did it--he'd say, "Now, this isn't a threat, but." Like, "I mean no disrespect, but"--and that's when Tony and I went underground.

You guys went underground, the other guys didn't--tell me about your choice to compare them and Troy at one point with farm animals.
I love that you noticed that. The farm animals. (laughs) It's funny because some people get it, some don't--we see the dog in the snow and that's Tony's last friend, we use the cow set up for the slaughter and we edited that together with Troy saying that he wasn't scared. The cows aren't scared, either, right? Maybe it's not all that subtle, you know, but we thought it was--more than just funny, but right. These guys are being led blind to the slaughter and let me tell you that we didn't plan that beforehand. I woke up, had a cup of coffee at the farm, and the day's events led themselves to those moments at that juxtaposition of images. I think, too, that Tony and I were really influenced by a few filmmakers that led to our gravitating toward that sort of subterranean commentary.

Like?
Like Terrence Malick. He has a way of injecting nature into his films as comment on the idiocy of his human characters. More, though, it just seemed to work. I also had films like Hoop Dreams and Hearts of Darkness on my mind--we wanted the film to be scored and cut like a narrative.

Talk about going "underground." You must have still been tight with him even when you had an inkling that things were going south.
Yes, the entire time we stayed tight, but I confess that without this project to keep us there I would have bailed out months earlier. There were things that he did, the kind of abuse he doled out, never physical, but mental/emotional--insane behaviour and I wouldn't have suffered that if we didn't have this project to work on.

Duffy's attacked my editor for his review of The Boondock Saints.
(laughs) Not surprised at all. Troy's a bracer--he's abrupt, caustic, narcissistic, misogynistic, alcoholic, you name it. There's actually a lot of material that we didn't include in the film that would have really and truly alienated the audience immediately. We really had to balance Troy out a little, believe it or not, so you'd stick with it for long enough to get the payoff. You know, he wrote a great script, but he's not a good human being and he's not a director. Not then, not now. I was on the set when he was shooting and he was doing so much slo-mo that I remember looking at Tony and wondering, "Does this guy know what the hell he's doing?" Derivative crap. He managed to pull out some stuff in the editing bay. I love the scene where Willem Dafoe takes everyone through the process at the end of the movie--I think that's the one moment where Duffy really struck some gold. But how much of that was Troy and how much of that was Dafoe? But the way he'd dress the mobsters, the dialogue, I mean, what are we doing now, a cartoon?

Is Overnight a revenge piece?
No.

No malice?
Well, I wouldn't say none. There was abuse, things that were said, that I'll never forgive him for. Never. The way that I found out that I wasn't managing the band anymore, for instance, was when Troy was doing an L.A. TIMES interview that I was filming. Callous stuff, just almost pathological behaviour. There's no excuse. Within six months I wanted outta there--that environment around Troy was poisonous. We started with the best intentions, y'know, we wanted to document the rags-to-riches story of this neophyte who beat the bigs at their own game. We wanted to capture this ruffian who had this kind of uniqueness about him to allow him to connect in this town, to shake it up a little bit. But when Miramax began to retreat, when the drinking got out of control, when the hubris got out of control, when he started to turn on us, we had to make a decision, make a pact then and there--Tony and me--to see it through wherever it was going to lead us.

You believed that it might turn out okay?
Honestly, no. No, we started to really gravitate towards this idea of watching a train wreck. Of turning our rags-to-riches story to a riches-to-rags story--a guy who had it all who shit it all away in record time. There was always a chance that the band would do great, that the film would break gangbusters, but it didn't happen that way. Sometimes there's karmic justice.

What was so attractive about Duffy in the first place?
Even when he was berating us, he'd sort of gather us back in with his other hand. Classic abuser behaviour, y'know? And we were the classic victims. He'd say these unforgivable things and then he'd be taking you out at night, buying you dinner and drinks. He likes to keep you there but at bay--he wants to use your talents as he sees them. I shot the entire credit sequence for Boondock Saints and I got nothing for it: no credit, no pay, no anything.

You might be grateful for that as your career proceeds.
(laughs) Too true.

Tell me about the intervention scene with Taylor Duffy.
He called me and said, "Mark, we're doing an intervention today, come over and shoot it."

He actually called it an "intervention"?
He did. He was morbid for days beforehand, the darkest I'd ever seen him in the four years that I'd known him. He knew that all their dreams and opportunities were slipping away, he knew that his brother's ego was the cause of all that. So when he called me that day he'd resolved himself to do it in an hour. We get there, Troy gets there, and he doesn't want us to shoot--but I said, "Troy, I can't stop this stuff from happening, Taylor called me to come over here." And to [Duffy's] credit, he clapped his hands and said, "Shoot." It was a really hard day, a really hard thing to watch, but I was happy that Taylor got to say what he needed to say. We were mindful, too, that at this point in the film we needed to have a mouthpiece for the audience and what better way to provide that outlet than to have the brother regaining his dignity. It was, from our perspective, a gift from heaven.

Crisis of conscience?
Not really. We wanted to be true to Taylor's putting himself on the line like that and I think that he comes off as really heroic. Nobody does an intervention out of spite, you know. He did what he did because he loved his brother. If Troy doesn't see that, it's because he can't see that.

What's been the reaction of the bandmates--the other people in the film who don't come off so well?
None of them wanted the film to be seen except Tony and I. You know what, though, it's funny, Taylor has never spoken publicly about this movie but I think he's received so positively in the film. I wonder, I hope, that maybe he's seeing what it was that we were trying to do. But he was so careful, he was so loyal--and I hope that he sees that he's getting his due.

Why did the guys let you shoot them at their darkest hour at the end, back working in service and construction?
I think that they still thought something might happen, something good. There weren't any shots that we snuck--well, there was one, where Troy was talking to himself, but the rest of it, they knew we were there, knew we were finishing this film on that note and I thank those guys to the bitter end for letting us do it.

It was multi-format, yes?
That's right, we wanted to have that textured look--I especially wanted to work in Super8, that's really getting your hands in the process. Afterwards we rented decks, holed up in my apartment for seven months with Tony making logs of the shots on his laptop--we'd go through every tape and every time we saw something that could be used we put on a clip reel. We had 150 hours of clips from 350 hours of raw footage. When we first screened it at two hours in Seattle, we got good response, but it was just too long. We had no distance on the project, you know, we were blinded by proximity and four years with this thing, so we hired a new editor (Jonathan Nixon -Ed.) to give us fresh eyes, to help us make the picture move like a narrative.

How'd you make Harvey Weinstein a hero in a film about filmmaking?
(laughs) How did we do that?

I like how Duffy describes Weinstein as a "fat, egotistical fuck" and then at the end of the film, there he is all alone, paranoid, fat, bald...
(laughs) Fame, power... Doesn't change you, man, it accentuates you.