by Walter Chaw Some of the preview spots for Jon Favreau's Elf are hysterical, leading me to think that the film's failure to be very funny has a lot to do with bad direction, editing, or maybe both. It's a lightweight, unapologetically warm-hearted picture that earns a lot of respect for avoiding scatological humour en route to honouring nearly every other ingredient of the The Jerk bumpkin-out-of-water formula. Like Steve Martin, Will Ferrell announces himself with this film (and Old School) as a smart comedian unusually committed to effect and the directions his performance might take him. Ferrell isn't a chaotic jester. His clowning compels because it has the quality of internal logic, enough so that it's somehow possible to accept his man-raised-by-elves creation at face value.

Buddy (Ferrell) is innocently abducted as an infant by Santa (Ed Asner) and raised by a lonely, progeny-starved elf (Bob Newhart) until such time as it's clear that Buddy has no place at the North Pole. An intriguingly unreal North Pole set is squandered as Buddy sets off on an ice floe for the mythical land of New York City, seeking his biological dad (James Caan), a curmudgeonly children's-book publisher who needs a shot of Christmas spirit. Basically your country mouse tale married to holiday family reunion claptrap, Elf won't win any awards for originality, but what it manages to do is offer its frugal charms with a lot of Ferrell-fuelled mania.

Yet Favreau consistently pulls Ferrell's punches somehow, leaving the picture curiously flaccid and without inspiration. And though Zooey Deschanel is a sweet love interest (her low-key performance fascinating compared to her turn in All the Real Girls) and Peter Dinklage's cameo as a legendary children's book author is one for the ages, the supporting performances in Elf, like the rest of the picture, are workmanlike and unremarkable. It's a film that distinguishes itself primarily as good-hearted while the only time the premise is utilized to its fullest potential is when Ferrell whispers to a department store Santa, "You sit on a throne of lies." It's not that Elf was a premise ripe with cinematic possibility, but that there's no real reason for the film to be this flat and perfunctory. With Ferrell in ascendance and the kind of subterranean intelligence that makes good use of that famous Bigfoot reel, for Elf to be bereft of much of a spark is dispiriting at the least. Originally published: November 7, 2003.


THE DVD
by Bill Chambers Although it's obvious that New Line is trying to beat Disney at their own game with the decidedly kid-friendly DVD release of Elf, parents will probably walk away from the Automat Pictures-produced bonus material of this 2-disc set as edified by it as their children. Having anticipated Mouse-House condescension from a featurette called "Film School for Kids" (20 mins.), for instance, I am ashamed to admit that I learned more from it about the divisions of labour on a shoot--so that's what the 3rd assistant director does--than I did during all my years in film school, and without having to endure the length-of-a-blink cutting and Office Assistant-style animations that have become the trend in juvie edutainment. Find this and other comprehensive making-of content under All Access Pass, including "Tag Along with Will Ferrell" (7 mins.)--in which the star editorializes a typical day on the production--and "How They Made the North Pole" (12 mins.). As much a "Why They Made the North Pole the Way They Did," the latter touches base with a gamut of personnel, from journeyman production designer Rusty Smith to on-set dresser Patrick Kearns.

"Lights, Camera, Puffin!" (7 mins.) interviews the Chiodo Brothers, Charles and Stephen (recently of Team America: World Police), about their stop-motion work on the film and, even better, intersperses footage from their surprisingly accomplished super8 monster movies. (They grew up in the same neighbourhood as King Kong animator Willis O'Brien, who was apparently quite forthcoming with aspiring talent.) In "That's a Wrap" (12 mins.), director Jon Favreau distinguishes between production and post-production thusly: "The shooting of a movie is like shopping for groceries, post-production is like cooking a meal." Hate to say that this metaphor isn't the first clue that "Favs" has had food on his mind a lot since Swingers. Here, we meet various F/X types and audio engineers as they put the finishing touches on Elf. A discussion of the challenges inherent in adding sound effects to a comedy (how broad do you go?) mark the bit on foleying as an especial highlight of the piece, which ends with Asner lamenting the absence of candy canes at the film's New York premiere.

Eight deleted/alternate scenes with optional commentary from Favreau indicate that nothing momentous hit the cutting room floor, though Favreau's comments are revealing in that he cops to numerous compromises in order to bring Elf in at 90 minutes and win it a PG rating. Studio notes like "too brutal" (a criticism against the original 'Miles Finch fight') were never contested--it appears that Favreau, like his crony Peter Berg on The Rundown, felt he could catch more flies with honey after debuting as a director with the abysmal Made, a movie that painted him as uncommercial. (Berg launched his own filmmaking career with the summarily rejected Very Bad Things, starring Favreau.) Favs returns in the first of two feature-length yak-tracks, the second of which gives Ferrell the mike to himself. Too bad the two didn't pair up, as Favreau generates a lot of chemistry with his co-commentator Vince Vaughn on the Special Editions of Made and Swingers; both men seem a bit untethered, with actor-by-day Favreau concentrating on the merits of his cast and Ferrell, curiously sparing us his wit, invariably appreciating the on-screen illusions. Though not completely without interest (Ferrell lets slip that Anchorman helmer Adam McKay is responsible for many of Elf's best jokes), these sessions are a little on the drowsy side.

Disc One presents Elf in a 1.85:1 anamorphic widescreen transfer with 5.1 Dolby Digital sound. On the surface, it may look as though New Line has left DTS fans in the lurch, but up until the supersonic climax (which creates the sensation of being in the eye of a rollercoaster as is), one can't imagine the audiophile's format of choice doing anything other than goosing the volume. The image is meanwhile so appealing from a technical standpoint that it elevates the movie's TV aesthetic; my guess is that Elf had a cheaper patina on the big screen. (I skipped the theatrical run.) With "infinifilm" activated, the disc's chapter count balloons from 17 to 63 and the viewer has the choice of leapfrogging to a select supplemental snippet at the start of each new chapter. I hate interactivity on this level with a fiery passion since it encourages total disengagement with everything but the remote control, hence my recommendation is to stick with the Beyond the Movie and All Access Pass portions of both platters. Unfortunately, if you want to watch the "fact track" on Disc One, you have no choice but to at least activate the infinifilm pop-up interface. A handy glossary of film terms caps off the first disc. 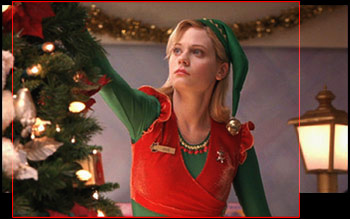 Disc Two contains a mostly panned-and-scanned fullscreen version of Elf (as the screen capture at left shows, there is slightly more picture info on the bottom but significantly less on the left and especially right sides of the frame) as well as a lesser batch of Beyond the Movie featurettes. "Kids on Christmas" (6 mins.), "Santa Mania" (7 mins.), and "Christmas in Tinseltown" (7 mins.) are uniformly negligible unless you're into "Kids Say the Darndest Things"-type humour or have always craved greater insight into the annual Hollywood Christmas Parade. Rounding out this section, "Deck the Halls" (10 mins.), an ironically Grant Wood-esque portrait of a decoration-obsessed family named The Grants, is a refreshing change of pace mainly because it leans closer to hicksploitation than to Noëlsploitation. Housed beneath All Access Pass are not only spots for Secondhand Lions, The Polar Express, Harry Potter and the Prisoner of Azkaban, and "The Dave Thomas Foundation (for Adoption)," but also numerous song-specific clips from the film prefaced by video-based introductions courtesy Favreau. Frankly crappy Fun 'N' Games--"Elf Karaoke," an Elf read-along storybook with or without narration, "The Race Down Mt. Icing," "Elf in the City" (guide Buddy through traffic--think "Frogger" for the Vic-20), "Fix Santa's Sleigh," and the seemingly unplayable "Snowball Fight"--complete the set-top content. ROM users can make their own storybook, elf-inate personal photos, do a "script-to-screen" comparison, and expend precious ink and paper on "printable activities." Love those advent-style menus, by the by. Originally published: November 8, 2004.