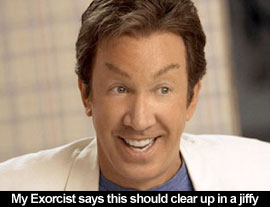 by Walter Chaw Jamie Lee Curtis is looking alarmingly like Kim Hunter from Planet of the Apes and Tim Allen remains the single most aggressive, unpleasant personality who's supposed to be sunny and hilarious in the medieval endurance ritual that is Christmas with the Kranks. An act of self-flagellation like wearing a hair shirt, say, or whipping oneself with a cat-o-nine tails whilst chanting the liturgy, the picture has all the Christmas cheer of a reindeer carcass and is the finest evocation of being in Hell since The Passion of the Christ. People voting for "moral values" this last election should take a good hard look at Christmas with the Kranks, which purports to champion all those old-fashioned, God-fearing, middle-American moral landmarks (family, community, Christmas) but ends up championing consumerism, venality, hedonism, vanity, and intolerance. So much intolerance, in fact, that it plays rather well as a horror movie. A character is asked if a family not celebrating Christmas is Jewish or Buddhist: "No, none of that," he says. It reminds a lot of that "Twilight Zone" episode "The Monsters are Due on Maple Street," where a crisis shows suburban everymen to be monstrous, tribal, and dogmatic.

The creepiest thing about Christmas with the Kranks is that the Scrooge at the centre of this crass retelling of Dickens's crass A Christmas Carol is actually an irredeemable, grade-A jerk. Luther Krank (Allen) needs his redemption, and he gets it at the hands of everyone else in the film, who just happen to be more insufferable than he is. Luther is a boor and a loudmouth, a bully and a creep, and the instruments of his salvation are evangelical dipshits in love with the despotic power that homeowners' associations and grid-planning have gifted them. (I'm not sure how Luther is intended, but Allen can play a character no other way.) As his wife, the shrill Nora, Curtis makes a bid to regain her scream-queen crown, greeting each phone call from Peace Corps-bound daughter Blair (the scrumptious Julie Gonzalo) the same way she greets every single stimulus the film provides her: with an ear-splitting shriek. Because beloved Blair is in Peru, Luther and Nora decide to skip Christmas and take a cruise instead--a reasonable idea, except that it earns the immediate enmity of their invasive neighbours, Luther's co-workers (his secretary complains seriously that she'll have to buy her own cheap Wal-Mart perfume because Santa's not coming this year), and various unpleasant extras, such as the boy scout troop chiselling Luther for a few extra bucks for a Christmas tree and the group of stalker-carollers trying to communicate canned Christmas cheer like smallpox.

Based on a novel by John Grisham, adapted by Chris Columbus, and directed by Joe Roth, still hot after his last triumph three years ago, the tepid America's Sweethearts, Christmas with the Kranks is disheartening, deadening fare. All of its jokes fall embarrassingly flat ("Why does an Irish bar have fish tacos? I don't know, but I feel sick"), and the only way that it remotely registers is as an examination of the repulsiveness of false religiosity and unfettered groupthink. Given any opportunity, each "positive" character in the film becomes a money-grubbing, scheming, all-American asshole--at least until an unintentionally frightening finale where the Kranks give in to convention and suddenly earn the all-embracing pod-acceptance of their already-soulless neighbours. It makes an overture, sure (one that entails Luther sacrificing a lot of money--most of the tension points in this film involve financial exchanges), but the better message would have been that the trappings of Christmas are hollow without the true fellowship that this rented pagan holiday provides the opportunity for--along with a few days off work, of course. The message of Christmas with the Kranks seems to be that we should spare no expense to coddle a thoughtless, already over-coddled child this joyous time of year (see also: Jingle All the Way), but infernal fecklessness aside, it's no certainty that we're in the Devil's headquarters until Squiggy makes a cameo, Dan Aykroyd breaks out an accordion, and some other jackass digs up a pan flute. O come all ye faithful. Originally published: November 24, 2004.