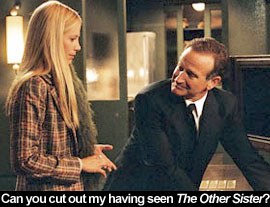 by Walter Chaw It's interesting to me in an esoteric way that Robin Williams consistently seeks out projects that position him as some sort of levitating guru detached from the travails of the common man, floating above the madding crowd with a beatific smile on his god's-eye mug. Think of, among the many shrinks, ex-shrinks, serial killers, and genies Williams has played, his "Wizard of Oz"-ian Dr. Know from A.I., his demented developer Sy from One Hour Photo, or his sainted Dr. Chris from What Dreams May Come. By all accounts, Williams is a nice fellow--a little manic and arrested, perhaps, but pleasant and even philanthropic. So what is it about the camera that turns him into an auto-consumptive egoist with a bizarre saviour complex, into this sad clown, velvet or otherwise, who finds humour in tragedy (so the theory goes) but lately has worked pretty hard at just being gloweringly melancholic in "psychological thrillers" long on sterile atmosphere and short on any sort of resonance? Williams has this air of feeling sorry for humanity that doesn't seem pious as much as it seems self-satisfied and superior. I'm not sure what the holy land for his crusade is, but I hope that he and Kevin Spacey conquer it soon so they can get back to not being irritating pricks with delusions of Christ.

Take The Final Cut, for instance. This feature debut from documentary filmmaker Omar Naim takes on Philip K. Dick by way of David Cronenberg, producing a piece that steadfastly avoids anything with a whiff of controversy. Its fascinating, timely conceit gets pitilessly squandered at the feet of so many story conveniences and contrivances that the aggregate effect is one of dismay over how something that could begin this promisingly could yield so antiseptic a crop. The Final Cut does Williams no favours in his ongoing mission to convince the world that he is the most deep-feeling man in America: his character, Alan Hakman (he's a glorified film editor, you see, and his name is HACK-man--get it?), describes himself at one point as a medieval sin eater, the human equivalent of a scapegoat hoisting the evils of a community onto his hairy shoulders. It's perfect in theory for Williams, this character who, in cutting together the experiences of a corpse's life that are recorded on an organic microchip embedded in utero, is entrusted with turning the lives of pederasts, wife-beaters, and (gasp) business men into saccharine gruel like The Story of Us. He's the Ron Howard of the afterworld--Garry Marshall as Charon. Shudder now.

The opportunity to skewer the American media's propensity, nay, duty to turn the worst of humanity into a human interest story is employed weakly in a thriller plot having something to do with the death of an executive for the company that invented the so-called "Zoe Chip" and its connection to a band of rogue "cutters" (what the film calls its editors), led by another actor famous for playing Christ, James Caviezel. (In fairness, how could The Final Cut not be pious with not only two Oscar winners--Williams, plus Mira Sorvino as Alan's girlfriend (?!)--but also two Hollywood prophets in the cast?) Caviezel's cabal wants the chip of a dead industrialist (who appears to molest his daughter in one "re-memory," though I don't believe that's why they want the chip--it's just in there to be ugly, I think), and Alan refuses to let it go. There's a bit of Asimov-ian claptrap about the three rules of cutters--and Williams, of course, starred as a martyred Asimov-ian robot in Bicentennial Man--that never really comes into play nor makes sense in context. This is not to overlook the obfuscating claptrap involving a terrible childhood memory of Alan's that his new assignment might assuage in some way. I kid you not that everything of minor interest in the piece (and Williams's late career) is crystallized in the lyrics to the maudlin Pink Floyd song that bears this film's name: "Through the fish-eyed lens of tear-stained eyes/I can barely describe the shape of this moment in time." Yep, that's pretty much the size of it.

Conversations about the persistence of memory, the malleability of perception, and the sanctity of the life of the mind can be had with or without seeing The Final Cut. The dialogue one is most likely to have after the film, in sad actuality, concerns all the ways that it avoids discussing anything of consequence through chase scenes, gunfights, tight-lipped thugs, and stupid mysteries that have stupid resolutions. Derivative composer Brian Tyler's score is a straight ripper of Howard Shore's work with Cronenberg, and I'd wager that the theft was not without encouragement from Naim. (Ditto DP Tak Fujimoto emulating Cronenberg cinematographer Peter Suschitzky.) An organic implant that alters perception is a page torn out of the Canadian master's playbook, after all, as is the protagonist in search of himself seeking refuge in self-mutilation--the machine-evolution of the flesh. You half-expect an insect/typewriter to spew a ticker tape out of its ass in the picture's set-design and glass-piano feel. But cribbing the look and sound of an actual artist does not the counterfeiter an artist make. While it fascinates because it's something like the tenth film this year to deal with memory manipulation and the sweet kiss of forgetfulness, taken out of the flow of the zeitgeist, The Final Cut is an abject, miserable little failure short on ambition and short on philosophy, ultimately serving only Williams's and his inscrutable calling. Originally published: October 22, 2004.