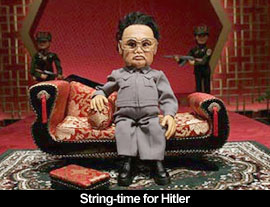 by Walter Chaw The comedy bits that work in Matt Stone and Trey Parker's Team America: World Police are the most vile, the most puerile. The now-notorious puppet sex scene is uproarious--the consumption of Hans Blix by a catfish and the attempts at having marionettes fight one another in hand-to-hand combat are pretty funny, too, and though it's a little oblique, I appreciated our intrepid band's endeavour to disguise one of their own as a gentle-puppet of Middle Eastern decent. But we reach a point during this experiment in neo-"Thunderbirds" cinema where it becomes clear that the satirical sharpness that defines the duo's at-times incandescently brilliant "South Park" has been shunted aside in favour of vomit gags and screaming homophobia. It's faint praise to say that Team America is sometimes as funny as Steve Oedekerk's "thumb" movies, but more often it's just protracted and uninspired.

The villain of the piece, North Korean dictator Kim Jong Il, is conspiring to distribute weapons of mass destruction to hilariously conspicuous Al Qaeda operatives. Opposing this nefarious plan is Team America, a band of stock commandos based inside Mt. Rushmore who are ready to dispatch to any point on earth at a moment's notice in order to enforce the American ideal of morality. That's pretty much it as far as the satirical elements go: there aren't any marble-mouthed Bush Jr. puppets, no somehow-more-wooden Rumsfelds presiding over the abuse of prisoners of war, no 'leeza Rices swallowing their faces on national television while trying to explain how two teenagers in Littleton, CO imagined crashing a plane into a building. A gaggle of Hollywood lefties--Sean Penn, Tim Robbins, Alec Baldwin, Susan Sarandon, Janeane Garofalo, Matt Damon, Michael Moore, and so on--stands in for the politicians, and each one is subjected to the sort of torture that many a young boy reserves for his G.I. Joes (firecrackers and plastic men = oil and water). What the celebrities are not is lampooned prior to their dismantling with any kind of real wit.

Rather, the target of Team America: World Police's ire seems to be the very idea of mass communication. "Acting" is the magic MacGuffin of the piece, the mystical Shadow that clouds men's minds, traceable to every single calamity of our post-modern age. But the boys are hoisting themselves on their own petard, aren't they? By criticizing the influence of popular culture on world events through a spoof of the big-budget Bruckheimer action picture, ultimately Parker and Stone only devalue their own invaluable contributions to issues like censorship (the "shit" episode of "South Park" is essential viewing for every reasonable adult), religious hypocrisy ("The Passion of the Jew"), and moral absolutism--stances already made rickety by their concession to the MPAA to trim the aforementioned hump session in order to gain an "R" rating. If Team America underperforms at the box office, consider the filmmakers' surrender to the censorious (in addition to their insouciant self-hate) as the principal breaking-point between Parker/Stone and that loyal and intelligent portion of their audience.

Team America: World Police spends so much time attacking its own existence that none is left to address the real issues of the day. There's no requirement for a film to be topical or, in truth, anything more than puppets fucking and barfing, but without any sort of substantive platform, what remains is about an hour-and-a-half of smarmy assholes jerking on strings for, mostly, their own amusement. The best parts of the film (as were the best parts of the far superior South Park: Bigger, Longer & Uncut) are the musical interludes, but Jong Il's lonesome ballad, the Team America theme song, and the ode to how much Pearl Harbor sucks are not enough to balance out the long takes of puppets looking out windows or standing on the steps of the Lincoln Memorial. Team America: World Police is in love with its cleverness without being particularly clever; juggling chainsaws is hard, too, but not only is it not that great an accomplishment once completed, it's also without any sort of sociological significance, destined for the insubstantial and trivial realm of a geek show. Originally published: October 20, 2004.