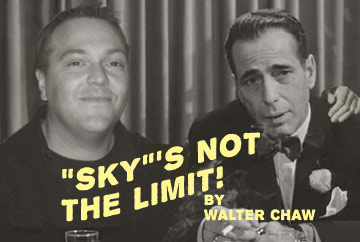 October 3, 2004|The restaurant area of Denver's Hotel Teatro is split into two levels: a half-mezzanine sporting a bar that overlooks the street level, which in turn has its own bar and windows. In the late afternoon after the business lunch crowd has siphoned itself back into the buildings in and around lower downtown, the mezzanine is empty, brown, and swathed in shadow--making it an interesting place to meet the mastermind behind the somewhat baroque Sky Captain and the World of Tomorrow, Kerry Conran, who would seem to be at home here in this art deco oasis in the middle a liminal mountain metropolis.

The soft-spoken, surprisingly unassuming Mr. Conran is the visionary behind one of the most technologically sticky pictures in decades: a film created completely within a mainframe that plugs A-listers in here and there among the 3-D phantasms. I'm not sure what to say, even, on the subject of Laurence Olivier, who was digitally exhumed (resurrected, if you prefer) to play the role of the villain in the piece. Avoiding like land mines the tired topics of Sky Captain's fabled demo reel, software, the recruiting of said A-listers, acting in a blue warehouse, yadda yadda blah blah, I asked Mr. Conran about how his film will fit into the grand scheme of things. We also touched on his next project, an adaptation of Edgar Rice Burroughs's John Carter of Mars series that he's inherited from Robert Rodriguez.

FILM FREAK CENTRAL: Do you feel as though you're continuing/contributing to the tradition of pulp art and the style of Golden Age comics?
KERRY CONRAN: I hope we're worthy of that legacy. The work of those artists and writers was really the template for us. To some extent we stole from it, to some extent we expanded on it--hopefully we added enough of our own sensibility. We tried to approach it almost as though we lived in that era and were just another group of artists trying to make a work comprised of those pieces and inspirations. We wanted the film to feel like a lost film of that era. If we're a footnote in the history of pulp art and Golden Age comics, that'd be enough, that'd be great. If we even just inspire some people to go back and investigate some of that stuff, we'd have done enough.

The World's Fair...optimism...
Right, right, obviously the title refers to the World Expo and the spirit of that was looking at the future with a sense of optimism and a sense of the whimsical, you know, something that we've lost a lot in our fantasies. We're more cynical, more practical, which they lacked. They never thought about how practical it was to dock a zeppelin at the Empire State Building, but they did it anyway because it was the future. In that regard I think what this film attempts to do is to take that enthusiasm and innocence and celebrate it--to not get mired in the practicality that we're fixated upon today.

Yet there's a darkness about your film, this idea of machines making machines.
On the surface I think this film does suggest an end of the world theme which was never the intention going in. If anything, the whole notion of a world of tomorrow was a notion founded on the promise of building, but there is indisputably a dark undertone that developed along the way. Piggybacked, I think, on this view of the world and where it was headed, the idea that humanity on the path that its undertaken is doomed. But here's the opportunity to correct it, right? Totenkoff's plan of what science will solve, heaped on what science can't solve--but heaped on top of all of it is the optimism of science and what science can accomplish. But it's hard to get away from the cynicism of modernity.

Tell me about the ghost of Laurence Olivier.
Well, he held out to the bitter end. (laughs) It actually was Jude Law's idea. We were shooting in London at the time and Jude said that he had the perfect actor to play this part, "Laurence Olivier." It was one of those ideas that I kicked myself for not having and it was perfect for a lot of reasons. For Jude, I think, it was just a desire to act opposite Olivier, but for me, if you're in search of Oz and the Wizard, who better--what better?

It's slippery, isn't it--machines making machines, and your machine making this machine.
It's true--there are a lot of paradoxes.

Some ethical ones?
We never thought of that, to be honest. In the process of doing this film that dilemma of bringing someone back to life... You know, it's another paradox in that just like the film there was this excitement and giddy enthusiasm to try it. It was loving, for certain. A lot of people may not see it that way, I realize now, but we certainly did.

Have you been taking a lot of heat for it?
Not directly. I've read a couple little things that raise questions about it. Not so much what we did particularly, but just that long-running dialogue about the possibility that one day someone will bring Humphrey Bogart back to act in a film. Just turns that dirt again. My feeling was that this was a very specific application and in response to that debate, I'd offer that its premise presupposes that audiences nowadays would turn out for Bogie in a movie. Sad to say that most don't even know who he is or would care to learn. At best, it's a novelty--I don't think there'll be a rush to resurrect Old Hollywood.

It's interesting because just like pulp artists, there's a possibility that your picture might rekindle interest in Olivier.
That'd be a nice eventuality.

Any other thoughts about the possible legacy of your film?
Hard to say sitting here before the film's even opened, but I'll tell you my single hope for the film is that it highlights its own beginnings as an independent film. If there's any legacy I hope that it's that. If independent filmmakers can take advantage of this method of filmmaking, it can represent a new window, a renaissance for independent filmmaking--a time when you can create on your own desktop a film the equivalent of the spectacle of a mainstream, big-budget entertainment.

Not everyone would say that replicating blockbusters at home is a positive future for independent cinema.
(laughs) That's true. I should clarify that what I hope for are films that are terribly original, that you couldn't even have dreamed a few years ago, not the cookie-cutter stuff that's ruined by too many investors and too much investment. With technology like this you have the ability suddenly to make manifest everything that you dream--that you can imagine--and outside of the studio system, free of studio interference. I hope, if anything, that this film can be a gateway for filmmakers stymied by their scope.

You were influenced by German Expressionism--Fritz Lang in particular.
No question. Early German cinema was born of just a completely different aesthetic than what we see nowadays. One of the last things I watched before starting this project was the Dr. Mabuse series that Lang had done--terribly inspirational, the use of art and propaganda even.

All nine books or one at a time?
Just one at a time to start. We may want to keep the books separate, but depending on how things go we might combine some things. It's too early to say. What I hope about the project is that we're able to create very rich characters in a very rich world--to find a way to make the story work and to make the film distinctive. To push the boundaries of what's been seen before.

Why Burroughs?
It's a funny thing because I grew up reading the John Carter series, the Tarzan series, but not knowing all that much about his other stuff. I think that when you look at Burroughs as a whole and in general, the picture that emerges is that this man might be kind of the unsung hero of American mythology. Star Wars, The Lord of the Rings--in 1912, 1913 when he wrote this stuff, this is someone who was inventing genre as he went along. Remarkable to find the cliché-maker, you know, the headwaters--the guy who we owe, and in return I feel like we owe his work something that feels as fresh and original as his work felt when he was writing it. In that regard, doing the Carter film is an extraordinary challenge and a daunting privilege, too.

Jude Law as Carter?
(laughs) I'd love to have Jude back on board, but Jude's too big for me now.