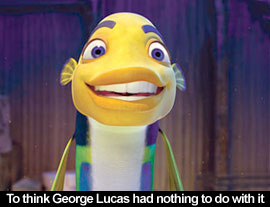 by Walter Chaw Shark Tale is a soulless platform for the Will Smith persona, here voicing a duplicitous social climber called Oscar who disdains his legacy as a car wash (make that "whale wash") employee in favour of a feckless dreamlife of bling and adulation. His wishes come true when a series of unfortunate events constructs the impression that little Oscar has slain Frankie (Michael Imperioli), favoured son of Godfather Don Lino (Robert De Niro), with Lino's "other" son, Lenny (Jack Black), still missing. Dubbed "Shark Slayer" by all of a submerged fish-tropolis, Oscar finds himself a celebrity spokesman, complete with a posse composed of agent Sykes (Martin Scorsese), grouper groupie Lola (Angelina Jolie), and the girl-Friday-next-door with the heart of gold, Angie (Renée Zellweger).

The standard line about honesty shares time with a lot of weak references to other films ("You had me at hello," Smith bellows to Zellweger), while a pair of product placements for Krispy Kreme, front and conspicuous centre in a film aimed at our obese children, marks the picture as another DreamWorks animated disappointment. Shark Tale is colourful in the way of a Nagel painting: flat, stylized, confusing purposeful energy for flaky, haphazard, ADD-informed anxiety. A suggestion that shark Lenny is gay because he's a vegetarian and goes into hiding as a dolphin mingles with stuff about gambling, getting tortured and executed mob-style, and using your (ahem) feminine assets for material gain. Most of the humour is predicated on other peoples' stupidity and possible sexual orientation, and most of the opportunity for empowerment is based on the hero rectifying his own horrific, criminal life choices. More, the film seems to offer African-Americans two possible life paths--graffiti punk and criminal, or gangster thug and criminal--before settling on a third, default option: a blue-collar career of servicing the middle and upper classes.

It's possible to watch Shark Tale without imposing any sort of social commentary upon it, of course, except that the picture essentially demands that it be read as a social satire. The Will Smith fish and his preponderance of middlebrow-safe funk (what is Smith's appeal but to be the black guy everybody at the office can agree on?) constantly reassures the white-voiced characters, "Hey, it's okay, not all whitefish can do that," before the dreaded and requisite scene when the Scorsese fish, decked out in gangsta wear, offers up the Pesci version of ghetto-rap. There's really not much separating the picture from, say, Bringing Down the House: lots of super-charged racial politics are scrubbed, rounded, and regurgitated for the approval of the ruling class. Though the semi-self-imposed socio-economic barriers that confront many of our minorities is not a bad thing to talk about (Bill Cosby has a lot to say on the subject, for instance), it shouldn't be transmitted in a half-assed way by a dead-eyed clockwork that isn't as funny as Kip Adotta's novelty song "Wet Dream," and isn't, all things considered, as innovative as The Incredible Mr. Limpet is for its time.

Fans of flatulence and defecation will also find an ally in Shark Tale. The film resorts to the lowest common scatological denominator when it isn't wallowing in the lowest common pastiche denominator, and when either option gets fatigued, the soundtrack ramps up in hopes that the new heroes of the hip-hop hitlist can infuse some energy and originality into the proceedings. At the end of the day, the biggest problem with Shark Tale is that it's cowardly--afraid, maybe unwilling, to take any stand, kowtowing to broad, socially sanctioned race and class (and gender) caricatures for cheap laughs and to accommodate a cast swelled past bloat while failing to really address the issues that it raises (an unsupervised pack of kid vandals among them) beyond making a joke of them and moving on. There's no requirement for any film to be more than a vacuous, deadening light show, of course, but some things, if you bring them up, must then get resolved, lest you run the risk of exploitation. Not the worst film of the year, Shark Tale is nevertheless among the most disappointing--or, rather, it would have been were it not made by the same company responsible for The Road to El Dorado, The Prince of Egypt, Spirit: Stallion of the Cimarron, and the dreadfully overrated Shrek films. Originally published: October 1, 2004.