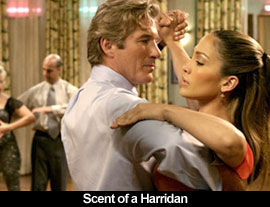 by Walter Chaw Shall We Dance sits on the screen like an unwelcome dinner guest, or a corpulent toad. It's a remake of a mediocre-but-popular Japanese film that jettisons the question mark after "Dance" on its title screen, the inflectionless phrase squatting there as this movie's moniker a curiously apt description of the dismal marionette's-waltz to follow. The only thing more inscrutable than Jennifer Lopez's self-effacing slide into the territory of Melanie Griffith's mumbling kewpie doll career is the filmmakers' concept of Richard Gere as a comic actor capable of carrying off long takes and haughty deliveries. After all, it's hard enough to believe that the glowering, pinched vision of J.Lo staring fixedly out a dance-studio picture window at Chicago's hurtling elevated train would serve as an invitation instead of a dire warning. The romance of the El has gone decidedly downhill since Tom Cruise, Rebecca DeMornay, and Tangerine Dream took a ride in Risky Business.

John (Gere) is married to Beverly (Susan Sarandon). They have two funny children who provide plot points at critical junctures, two well-paying jobs (he's an estate lawyer, she's a buyer for Saks) that don't fulfill them, and a coterie each of quirky co-workers for comic relief and character context (Stanley Tucci for him, some weeper getting divorced for her). One night John sees Paulina (Lopez) gaping vacantly out into the Windy City skyline and falls hopelessly in love with the idea that his life of leisure and luxury is empty without a depressed, uppity Bronx girl and her pining for the days when she competed in professional ballroom dance competitions. So John joins her dance class, meeting students and instructors as quirky as the private detective with a quirky partner Beverly hires to find out where John is going every week. Meanwhile, a lot of hurt feelings and dramatic misunderstandings erupt for no other reason than that they also did (with a tiny bit of motivation, at least) in the Japanese version.

Shall We Dance plays "Moon River" early on, evoking the weirdness of Breakfast at Tiffany's by recasting that film's star-crossed prostitute pair George Peppard and Audrey Hepburn with Gere and Lopez (while simultaneously revealing that the transference is sort of apt). Gere is a flat method pretty-boy here wondering what the hell's he's doing in an adaptation that washes clean almost everything of interest from the original, and Lopez is badly miscast and apparently insane as an ingénue asked to convey depth and psychological despair. The picture is a long, slow simmer--it's cheese fondue left on the burner for way too long, resulting in hideous, viscous rue: one part inspiration, ninety-nine parts unintentional laughter. The dramas are trite and every minor character gets one. It's tempting to identify Lisa Ann Walter's humiliating turn as a chubby, brassy, Bette Midler-esque dance instructor as the nadir of the piece (a lot of the scripted humour is at her expense, culminating in a cruel moment of inexplicable public humiliation), but with the amount of talent involved in this shipwreck, notably the great Tucci in a mortifying turn, there's enough horror to go around. Perfect for the lonesome, agoraphobic, undiscriminating, and vegetative; all others steer clear. Originally published: October 15, 2004.