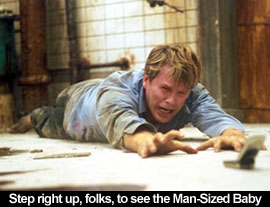 by Walter Chaw Pushed along by an inexplicable tide of buzz, James Wan's Saw is flat-out terrible. It features a career-worst performance from Cary Elwes--remarkable given that Elwes had already reached unwatchability in everything from Liar, Liar to Twister to Kiss the Girls to Ella Enchanted. (You can only ride the Princess Bride wave for so long before it falls out from under you in a crash of "it wasn't that great in the first place.") Between its hyperactive direction and hysterical script and performances, Saw locates itself as somewhere south of Rob Zombie's House of 1000 Corpses and, yep, even the much-maligned FearDotCom. The film isn't scary in the slightest, thinking that epileptic camerawork is a canny replacement for actual anxiety, and though there's some John Dickson Carr pleasure in the locked-room conundrum that opens the piece, by the end the film has become something like a wilting hothouse melodrama about the importance of family. Saw is outrageously stupid and, in its heart of hearts, more than a little desperate. Your slip is showing, boys.

Adam (screenwriter Whannell--warning number one) wakes up submerged while a luminescent key goes sliding down the drain. Ah, I get it: submersion/baptism imagery, birth imagery, puzzle imagery--all soon to get tied up with a mad-dog killer called "The Jigsaw Killer" for no discernible reason but to soothe the subtext. Adam screams and thrashes and acts like a screenwriter in his own film (for another example of this, miss Unspeakable, also co-starring Dina Meyer) for whom I suspect the Word is sacrosanct whether or not it's particularly well-written. The lights flicker on and we're in some kind of abandoned public bathroom, where Adam is chained to the pipes on one side and Dr. Lawrence Gordon (Elwes) is similarly restrained across the way, with a corpse the only thing between them. They learn that Gordon has six hours to kill Adam, lest his dead-eyed wife (Monica Potter) and tortured little girl (Makenzie Vega) get the axe. Equipped with matching what-do-we-do-with-these? hacksaws and a series of "Ten Little Indians" clues that strike as quaint even as they're striking as moronic, Adam and Lawrence gaze wistfully off-screen as a series of flashbacks and cutaways fill in the rest of the film.

How interesting would Saw have been had it had the brains and the balls to stay inside that bathroom with these two jerks doing their level best to think their way out of a bad situation? Our culture's lack of community and stranger-fear is on the chopping block of that premise, as are our invisible class system and our creeping inability to solve problems without technology. The premise puts us into the Stone Age, while the film's execution mires us in the information age: suddenly a cell phone becomes a main character--immediately a mini-taperecorder takes centre stage. Then you have the photographs and the hidden cameras; the idea that our Tweedle-Dum and -Dee's images are transmitted to the madman's computer monitor for his pleasure; the revelation that one of the former victims of this evil genius is provided instructions through closed-circuit TV (and a hilarious marionette, sorry Dario Argento); and the sneaking suspicion that the title Saw maybe serves a dual meta-function pointing to a textual reading regarding the ways that we see; does the movie mean to indict us in the baddie's crimes? Luckily, Saw is far too dim-witted to ever be noticeably pretentious. You can try to make a silk purse out of a Saw's ear (the bad guy lives in a mannequin factory on Stygian street--for dog's sake, that's probably the first place that I'd look), but you'd be a fool for trying.

No, Saw washes out as a joy-buzzer gag: it's startling sometimes but more often just irritating and horribly cheap besides. Danny Glover appears as a detective (eventually a burned-out detective) who suspects Dr. Gordon because Dr. Gordon's penlight pops up at the scene of a crime. (It's a good clue as to the actual killer's identity--at least it would be if Wan and Whannell were interested in playing fair.) Why Glover's character persists in his delusion after a Hang 'em High mishap is beyond me, especially when certain clues are given away in an end-of-movie flashback that erases any hesitation that Glover's detective should have no doubt about the identity of the killer all along. Sufficed to say that the picture's a muddle--a loud, ugly contraption that forgets that its apparent idol, Argento, started making dated, ludicrous garbage around the same time that he started using hardcore grind music as the backgrounds to his atrocities. Its juvenilia to the core--a Megadeath album cover meant to scare children and titillate confused teenagers. A bad film badly written, badly performed, badly scored, and most of all, badly directed, Saw's a mess, a waste of flesh. And I don't mean that in a good way.