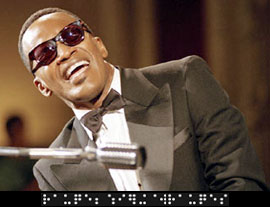 by Walter Chaw Jamie Foxx is so mesmerizing as Ray Charles in Ray, Taylor Hackford's biopic of the legendary performer, that the typical Hackford-isms threatening to weigh down the piece don't seem as heavy as they usually do. At its heart, the film is really just another faux epic from Hackford: another glimpse at the rise and fall (and rise) of a uniquely American persona (Everybody's All-American, An Officer and a Gentleman), another recent-historical essay, and another picture that begins to feel a little repetitive in the hermetic rises and falls in action that comprise such things. But then there's Foxx. He's the real deal, I think, and between this and Michael Mann's Collateral, 2004 is the year that Foxx becomes a top of the line, bona fide superstar. He's going to win the Oscar in a couple of months--and as the third African-American to claim the Best Actor prize, he's going to deserve it more than Denzel Washington did for Training Day.

The picture starts near the middle, jumps to the beginning, works its way back to the middle, skims some of the boring parts, and then, with a few poignant childhood flashbacks, proceeds in a more-or-less orderly fashion from the 1950s and the Chitlin Circuit on through to the day in 1979 when, after having banned Charles from the state over his refusal to play before a Jim Crow-segregated audience decades before, Georgia's senate dedicates "Georgia on My Mind" as their state song. Ray bears witness to the musician's struggles against racism and the almost more insidious thing of his alleged compatriots trying to take advantage of his blindness for financial gain. More surprising than a small-time white bandleader telling Charles that dollar bills are fives is the revelation that one of his most trusted advisors has had his hand in the till for years. The lesson of Tod Browning's Freaks is that disability is the great democratizing factor, trumping race in matters of larceny and division--and Ray, at its best, balances entertainment with politics in the same deft, graceful way as Charles himself.

Ray encounters its choppiest waters once it departs from the story of the moment to delve into Ray's upbringing in a rural sharecropper community. These scenes, given a super-saturated, hyperreal quality reminiscent of the Technicolor past in Hackford's Dolores Claiborne (an interesting trope to make Charles's memories of the seeing world impossibly lush, but shouldn't the gimmick have ceased with the child Charles's loss of sight?), walk that fine line between populist uplift and patronizing bullshit. (The nadir comes when Ray's mother refuses to help him up from a spill soon after he goes blind, leading to the most loaded moment involving a cricket and a real live boy since Disney's Pinocchio.) Tellingly, the worst, most sentimental parts of the film don't involve Foxx. A sequence towards the end where Hackford strays indelicately into the territory of the heroin DTs from Darren Aronofsky's Requiem for a Dream is another case in point that Ray is Foxx's film and everything else just gets in the way. Even with Ray Charles as the technical advisor on the picture, usually a surefire sign that all trace of ugliness has been broomed discretely under the carpet, Foxx finds a way to give his characterization the kind of complexity that smells like a desert of the real.

That's not to say that events in Charles's life aren't softened: the fact of the musician's twelve illegitimate children, for instance, is distilled in the film to one kid whose mother is martyred to the needle, allowing Charles to mourn for his dalliances. Still, Ray provides a portrait that at the least feels fair and complete until its final, jarring reel. This is borne out by the alchemy between Foxx and Charles's amazing work on the soundtrack, which re-imagines his vast library in an act of archiving that's all the more haunted for Charles's passing. It's as though he's written his own epilogue in a retrospective of his career, and it should send sales of the soundtrack through the roof. (The proximity of Charles's death to this film mirrors, in a poignant way, the death of ace engineer Tom Dowd (played here by Rick Gomez) and the excellent documentary on Dowd's life, Tom Dowd and the Language of Music.) The selection of new recordings, effortlessly lip-synched by Foxx in the film, not only remind why it was that Charles was at one time known simply as "The Genius," but also do as good a job as (actually, better than) the narrative in telling the story of the musician's life. The artist is his art, after all, and while Ray is a serviceable biopic with an enthralling performance at its centre (see also: Clint Eastwood's Bird), it would have amounted to a lot more had it not tried to fill in the cracks with syrup and pap. Originally published: October 14, 2004.