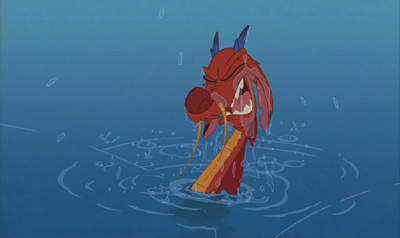 by Bill Chambers If Disney's animated features can be reduced to a stable of alternating boy movies and girl movies, then the studio's decision to make the cross-dressing fable Mulan at a juncture when they really needed mass approval (that is, after striking out post-Katzenberg with Pocahontas, The Hunchback of Notre Dame, and Hercules) comes across as conspicuously non-partisan--and the hero's androgyny isn't the only bet-hedging the filmmakers practice. A meticulous recreation of Imperialist China, for instance, is compromised by anachronisms cultural and temporal (the eponymous Mulan (voice of Ming-Na Wen), a pre-Tang Dynasty Chinese maiden, is introduced to us wearing a tank top and what resemble capri pants; later, she is served bacon and eggs for breakfast), while musical numbers, subversive humour, and Spielbergian spectacle perpetually collide like bumper cars. The end-product is neither fish nor fowl, though it certainly leans towards foul.

Mulan has no hook. Execs tried to sell it as a beauty movie--2-D figures composited onto 3-D backdrops could still elicit oohs and aahs six years ago--with a largely silent trailer, and I guess it worked, because Mulan's theatrical haul was a respectable $120M. But was anyone truly enchanted by the film's journeyman razzle-dazzle? I like Edward Zwick spectacles well enough, but mostly for their earnestness; his images are at best prosaic, and it's a backhanded compliment to both pictures to say that Zwick's The Last Samurai basically looks like the live-action version of Mulan. The only time Mulan threatens to be aesthetically/conceptually interesting is during its unexpectedly lean climax, which qualifies the phoenixlike mortality of cartoon characters by essentially resurrecting the avalanche-snuffed Hun villains as zombies. (Due in stores the same day as the 2004 Dawn of the Dead, Mulan's DVD re-release is nothing if not serendipitous.) Because of this, the good guys' siege on the palace rooftop, where the Huns are holding the emperor of China captive, takes the form of an inverted Night of the Living Dead, something that would seem to predict and perhaps obliquely triggered the undead cinema's renaissance in the new millennium.

Don't mistake this for prescience, though--it's just an area of the film wherein the circumstances are derivative of something besides other Mouse House hits. Between the postmodern wisecracks of the bantam dragon Mushu (Eddie Murphy, cross-pollinating his comedy stylings with those of Robin Williams and Nathan Lane), the Hun charge-as-wildebeest stampede, the Broadway pastiches, the cheapjack feminism ("Just because I look like a boy doesn't mean I have to smell like one!"), the über-Pollyannaish ending (from the method of dispatching key baddie Shan-Yu (Miguel Ferrer) to the Empire's spontaneous renouncement of institutionalized misogyny), and, above all, the bastardization of an exotic mythology (although this and the dubiously accent-free leads are somewhat mitigated by the new Mulan DVD's inclusion of a Mandarin dub), Mulan is a glorified snapshot of Disney's animation division for insurance purposes.

THE DVD
Hot on the heels of Aladdin's peerless DVD debut comes this less flamboyant 2-disc, THX-certified Special Edition of Mulan. Anamorphically mastered at last, the film will look slightly different to owners of the previous 1.85:1 letterbox disc because this presentation parts the mattes to 1.68:1, Mulan's negative aspect ratio. I wish I could praise the new transfer unconditionally, as it's incredibly lush. Alas, it's also chock-a-block with mosquito noise that compromises fine detail, if almost subliminally on small and/or standard-resolution displays. Similarly mixed across a quartet of language options (English, Mandarin, French, Spanish), the 5.1 audio is so richly textured that one is inclined to grin and bear the rough-edged picture. The late Jerry Goldsmith's underrated score (not to be confused with David Zippel & Matthew Wilder's pathetic song contributions) swaddles the viewer while thunderclaps startle from every direction. Unfortunately, I watched Columbia TriStar's Superbit release of Cliffhanger immediately before Mulan: the latter sounded comparatively bush-league with respect to exploding precipices and the like. On another channel, find an irksome feature-length commentary with producer Pam Coats and co-directors Barry Cook and Tony Bancroft, the three of whom prove to be ubiquitous throughout the set. I guess it's interesting to hear about the difficulty of animating a limp or deciding on a tonally-appropriate ending for the story, to name two things that aren't discussed elsewhere, but the trio is comprised of such automatons, such "the audience comes first" types (you know you never satisfy anyone that way, don't you?), that I fast grew impatient with not being able to engage them in a debate.

Also on board Disc 1 is a section of five deleted scenes that includes various substitute openings (prefaced by individual video intros from Bancroft, with the reasons for so much trial-and-error elucidated in the 4-minute featurette "The Prologue Chronicle") and a Cab Calloway-esque deleted song for Mushu, "Keep 'Em Guessing." "Music & More" collates hideous music videos for the Mandarin version of "I"ll Make a Man Out of You" (performed by none other than Jackie Chan), "Reflection" (Christina Aguilera), and separate covers of "True to Your Heart" from Stevie Wonder & 98° and Disney staple Raven, who remains as tone deaf as ever. "Games & Activities" offers a "DisneyPedia" glimpse into "Mulan's World," and "Mulan Fun Facts" are drizzled over a 2-minute compilation of behind-the-scenes footage. (At one point, these pop-up trivia nuggets accuse the animators of procrastinating with visits to Disney World--curiously registering as a grudge rather than as a joke.) Sneak peeks at Mulan II (a partial synopsis of which fills up a mini-storybook inside the keepcase), Pooh's Heffalump Movie, the upcoming Bambi and Mary Poppins Special Editions, Mickey's Twice Upon a Christmas, and Eloise at Christmastime finish off the first platter.

MUSIC & MORE
Another rendition of "Reflection," this time in Spanish by an Unidentified Mexican Songstress, or UMS.

BACKSTAGE DISNEY
The Journey Begins
Discovering Mulan (7 mins.)
Coats and co. regurgitate what they discovered on a three-week excursion to China and reveal how that knowledge impacted their approach to Mulan. I didn't know certain verities going in--for instance, that mainland rooftops are curled to guide the eye heavenward--and I hate that I learned them from white employees of the Walt Disney Corporation.

The Ballad of Hua Mulan (5 mins.)
An English translation of the original Chinese verses on which Mulan is loosely based, read aloud by an uncredited female narrator against an ever-shifting background of concept art for the film.

Early Presentation Reels
A b&w storyboard blueprint of the transformation sequence (from 1995) as well as a montage called "Visual Designs for The Legend of Mulan" (from 1996).

Story Artist's Journey
Finding Mulan (7 mins.)
Here, Coats says they initially made the mistake of ignoring the poem, resulting in a protagonist whose winning quality--her selflessness--was sorely absent. It was at this point that I started to realize just how spoiled we were by the Platinum Edition of Aladdin, as these featurettes are neither thorough nor inspired.

Storyboard to Film Comparison
Bancroft resurfaces in a 1-minute intro for this multi-angle feature comparing Chris "Lilo & Stitch" Sanders's thumbnail outline of the moment in which Mushu breaks the stone dragon to the surprisingly faithful finished product.

Design
Art Design (6 mins.)
We learn that one of the biggest hurdles in maintaining production designer Hans Bacher's simplified linework was deprogramming animators trained on such detail-oriented films as The Lion King and The Hunchback of Notre Dame.

Character Design (4 mins.)
Because he grew up in Taiwan, character designer Chen-Yi Chang was "a walking library" for the filmmakers. Chen-Yi is responsible for a lot of the foreground richness in Mulan, but let's not pretend that the movie wasn't ultimately helmed by a pair of Caucasian galoots.

Digital Dim Sum (4 mins.)
The fascinating procedure of stealing animation from earlier in the film to cheat a crowd scene is given a hasty due, again in part by Guaglione.

Music (5 mins.)
Lea Salonga, the singing voice of Mulan (and Jasmine in Aladdin), has a sincerely magnetic stage presence; would love to see her strut her stuff live someday. But that five-second glimpse of her in the recording studio? Not worth suffering this condescending window into the process of producing a musical.

International Mulan
Mulan's International Journey (6 mins.)
Blake Todd and Jeff Miller of Disney Voices International elaborate on the pitfalls of dubbing Mulan--and Disney films in general--for abroad. A bit with Otto Waalkes, the German Eddie Murphy, will likely not placate those wishing to see Murphy himself. In fact, none of the American vocal talent is interviewed on this DVD.

Multi-Language (3 mins.)
Snatches of the "I'll Make a Man Out of You" number in sixteen consecutive languages.

Publicity Art
Sifting through these Mulan one-sheets is a unique pleasure, as they are arguably the most beautiful that any Disney release has enjoyed thus far.

A table of contents for the DVD rounds out this mediocre package. Originally published: October 28, 2004.