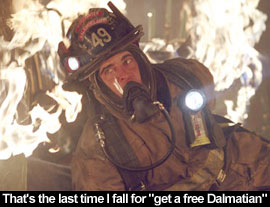 by Walter Chaw I hate this film. It's shameless treacle with the maudlin dialled at near-lethal levels. It's Backdraft II: Post 9/11, a soap opera hagiography of firefighters that's as soft and sentimental as any sweeps-week episode of Oprah--and just as unforgivably self-aggrandizing and smug. Ladder 49 is a convention of Midwestern middle-school teachers' idea of a good time, a collection of fatigued contrivances and squeaky clean, buttermilk-scrubbed cardboard characters posed carefully for maximum schmaltz. It's a big plate of nachos: lots of corn, lots of cheese, easy to swallow, hard to digest. I have a lot of contempt for this film because it has a lot of contempt for its audience: Call it the self-defense school of taking aim at a piece of crap, or a losing battle to save the folks sobbing loudly into their hankies when the lights come up. In its insidious way, Ladder 49 is as dangerous as other middlebrow epics like Radio and The Other Sister, pictures in which edgeless noble savages teach us through their selfless examples about life and about what it means to avoid real responsibility and community involvement. Weeping in a back-patting sort of way over a film like Ladder 49 is, for many, the equivalent of giving at the office.

Jack Morrison (Joaquin Phoenix) is as indistinct as his name implies: a mutt, a shadow, a ghost of a sketch. He loves fighting fires because he loves saving people. (It's not a character description, it's a eulogy.) And so Ladder 49 opens with Jack saving a person and then falling through a floor, trapped in the towering inferno with the kind of injuries indicated by a thin line of blood, with symptoms that include not being able to move until he can, crawl until he can, and break through a brick wall with an axe until he can. As he lies there, he has flashbacks to his rookie days at the firehouse-cum-frathouse; to meeting his wife Linda (Jacinda Barrett), herself a hollow collection of bit-lips and long-suffering; and to the good times he's had with all the boys. Play hard, fight fires even harder--the whole script is a tagline.

Phoenix, I'm starting to think, isn't a very good actor, but he's low-key enough that he hasn't drawn much attention to that fact until now. He's weird is what he is: He doesn't move his mouth when he talks, and he blinks maybe once a minute. Perfect for lizards and Shyamalan, not so great for action-movie/romantic leads. Phoenix also looks a little puffy in Ladder 49--maybe he's emulating onscreen mentor John Travolta, who plays the jovial, almost invisible Chief Kennedy. (When the two men lumber into battle, it looks like a pair of bratwursts roasting on a grill.) I'm amazed that anything could make Backdraft look good, but here you have it. People die, people with brothers on the force you didn't know were related until the perfunctory funeral that, of course, troubles the young bride, leading to discreet tension in the home. The relationships are impossibly murky, leaving you to draw your own conclusions as to why there's a fight here and why it is that the only black folks in the piece are getting rescued from burning buildings, parking the car, or getting scalded by steam and worrying they've lost their manliness (the second scene for firefighter Tommy Drake (Morris Chestnut) after he's tricked by plucky Linda in a sophomoric striptease gag).

The formula is easy. Whenever things get mired down (and they get mired down a lot), there's a fire. It's the 1940s war film with more David Gray songs and the same number of good-boy African-Americans. It's propaganda at its chest-poundingest, with Robbie Robertson subbing for Bruce Hornsby and a score by William Ross that is entirely indistinguishable from one by James Horner. (That is to say, there's a lot of Irish penny whistle on the soundtrack, which sucks with a mighty vigour.) Ladder 49 does no favours for firemen by painting them as urban saints and martyrs--what about the financial difficulties, the cut budgets, the marital strife? The substance abuse and the suicide? Though I'm not asking for a searing exposé on the demons that haunt our civil servants, I also don't wish to be treated like a weak sister and a gaping simpleton. Ladder 49 is a recruitment video you pay to see, featuring Troy McClures in the downward slides of their careers. It'll never cease to amaze me the appetite that people have for scenes of group karaoke at drunken weddings, little kids asking their daddies why he has to do something dangerous, and dogs on skateboards. Originally published: October 1, 2004.