***½/**** Image B+ Sound B+ Extras A-
starring Virginia Madsen, Tony Todd, Xander Berkeley, Kasi Lemmons
screenplay by Bernard Rose, based on "The Forbidden" by Clive Barker
directed by Bernard Rose 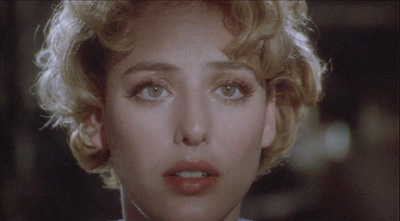 by Walter Chaw Clive Barker's fiction drips of sex, reeks of it. Squint and you can see sex rising off of it like steam from a fresh-slain carcass. His best work, stuff like the short stories "In the Hills, the Cities" and "Human Remains," or his audacious retelling of the Christian myth Imajica, are engorged with sensuality--alight with perversity and all manner of fetishistic penetrations. When translated into film, however, Barker's work (including that which the author has shepherded to celluloid himself) takes on a certain seediness that undermines the essential elegance of the writing. Something about Barker's prose makes the rawest obscenity seem privileged--the pleasure/pain principle of his cenobites in print, for example, is made the grail, whereas on the silver screen it dips dangerously towards kitsch and cult camp. Barker in writing batters defenses and leaves you prostrate before it; Barker projected feels formal, overdone, even ridiculous. The burden of fantasy for the reader is on the reader, but for the moviegoer, it's on the filmmaker.

Similarly elusive to the cinema are the peculiar gifts of composer Philip Glass. I tend to agree with the assessment that his music is wallpaper that simulates thoughtfulness, but Glass is perfect for Errol Morris and horror films. Here, his score functions as something like the sieve of the page--watching a film with his soundtrack suggests an approximation of the literal detachment of reading a book; as Candyman unfurls, defenses fall away and the fable-like quality of the story gains a kind of archetypal weight. It's the same sensation that Barker's fiction inspires, as it happens.

But the film, an adaptation of Clive Barker's short story "The Forbidden," ultimately owes its success to screenwriter and director Bernard Rose. A brilliant mad monk, the British Rose helmed the flat fantastic Paperhouse, and his Immortal Beloved--studio interference aside--is urgent with the breath of inspiration vital and mainlined. Because Rose is invested in passion, Candyman becomes an opera, the titular bogey's every appearance announced with a thickening of the atmosphere. Claustrophobically sexual, the tale involves a young, upper-middle-class woman named Helen (Virginia Madsen, in a career-best turn) who, in the course of studying the customs of the tenement-dwellers of Chicago's Cabrini-Green housing development, finds herself the inamorata of the Candyman (Tony Todd): the manifestation of an Urban urban legend, a black man lynched in another time for having the temerity to fall in love with a white woman. A recurring image of bees (part of the Candyman's torment) hints at the picture's eventual nod towards a matriarchy, while the evolution of the Helen character from scholar to myth points to film itself as the modern equivalent of firesides and oral history.

Candyman's instrument is a hook, a weapon he wields with an undeniably sensual relish. The sexualizing of the African-American male is a troubling subtext of the piece, commenting on the myth of black men being outfitted with different equipment that's altogether larger--more dangerous, too. (The title of the original story, "The Forbidden," takes on a different tenor in this way.) Candyman deals with transgression: the interracial romance; the intrusion of the white woman from the ivory tower into the ghetto of poor, inner-city blacks in their industrial oubliette; and eventually the invasion of institutions of economic and social privilege by a vengeful wraith from America's colonialist past. The picture is thick with inference and anxiety--anxiety about status (Helen's story parallel's Candyman's as one of steady, institutional degradation) and about legacy, but more than anything else, about thick, paralyzing sex.

Madsen's performance under thrall to her paramour is aided by hypnotism, a trick that Werner Herzog once used on the entire cast of his Heart of Glass. Indeed, Glass's score and Rose's direction conjure the same trick on the audience. If Candyman is a sociological horror film, it's also a scatological one steeped in shit and piss and, by the end, courageous enough to martyr its martyrs (educated women and defenseless children) and re-imagine its avatar as something more current in modern conversation than a black man murdered for love. It's the creative package that lulls us into accepting this genre piece as allegory, breaching our defenses against pretense and metaphor with proximate frights and finding its own legacy in its assault of persistent social inequities. With Barker's status as one of the most prominent openly gay figures in genre fiction at the back of the mind, that Candyman is something of an elegiac lament for the outcasts and the sexually humiliated only augments its status as one of the best of the end-of-the-eighties/start-of-the-nineties body mortification films.

THE DVD
by Bill Chambers Columbia TriStar reissues Candyman on DVD in a long-fantasized yet unanticipated Special Edition. Although it uses the same 1.81:1 anamorphic widescreen transfer as before, the presentation doesn't look too dated. My only reservation is with regards to the film's Cabrini-Green interiors, which mark a significant decline in shadow detail and overall image texture. (Black level flattens out to a slushy brown during these scenes as well.) For his part in the disc's patchwork commentary, an alarmingly hoarse Clive Barker laments that they had to skimp on the Cabrini-Green sets for budgetary reasons--perhaps, then, photographic measures were taken to obscure their relative cheapness that don't translate very smoothly to NTSC video. On the subject of frugality, I'm surprised the studio didn't spring for a 5.1 remix, though the Dolby Surround audio sufficiently reproduces Philip Glass's music (while tethering it to the fore of the soundstage) and succeeds in enveloping us in Tony Todd's bowels-of-the-earth pronouncements.

Barker is reunited, in a manner of speaking, with Todd, Bernard Rose, producer Alan Poul, and actresses Virginia Madsen and Kasi Lemmons on the feature-length yak-track, a real treat for us Candyman fans. It's not screen-specific for a second, but nothing pressing is overlooked and it invaluably gives the last words to Madsen and Rose, who reveal the film's original ending (unfortunately not included as a supplement) and rant about the difficulty of getting horror movies financed, respectively. The commentators resurface in Jeffrey Schwarz's "Sweets to the Sweet: The Candyman Mythos" (24 mins.), a retrospective making-of that contains a lot of crossover with the yakker but is worth a viewing to admire one of the better-preserved casts on record. Seeing Madsen's guileless expression as she recounts Rose's somnambulistic tricks, one is finally inclined to believe that particular urban legend. Meanwhile, in "Clive Barker: Raising Hell" (11 mins.), Barker alone reflects on his compulsion to tell scary stories and is honest and confessional about his turbulent relationship with Hollywood. Along with trailers for "Creature Features," Darkness Falls, and Texas Chainsaw Massacre: The Next Generation, a 5-minute compilation of the director's own watercolour-marker storyboards set to a passage from Glass's score rounds out this tasty platter. Originally published: October 18, 2004.