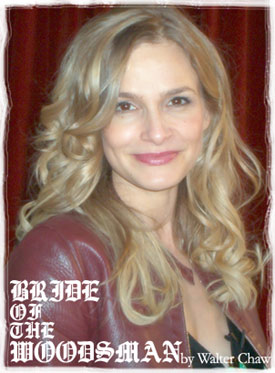 October 17, 2004|Taller than you'd think and luminescent on a drizzly autumn day in Denver, Kyra Sedgwick has a smile that lights up a room, even this cavernous warehouse space rented out for the 27th Starz Denver International Film Festival in LoDo. Best known for playing prettier versions of the down-to-earth romantic interests in which Amy Madigan used to specialize, Ms. Sedgwick is approachable and engaged in person, holding a cup of hot tea between her hands for warmth as she talks about the importance of hope in her films, even as her work of late has tended towards a darker hue. This is no doubt the influence of her husband Kevin Bacon's recent forays into the territory of the haunted, spotlighted by the fact that the couple have three collaborative projects out or in the works. Their latest, The Woodsman, finds Ms. Sedgwick cast opposite Mr. Bacon as the girlfriend of a recently-released child molester, a character reminiscent in her sexual liberation of the one she played in Personal Velocity. Ms. Sedgwick has never struck me as the type looking for fame--there is a quality to her work that suggests something as indefinable and inadequate as "carefree." It wasn't that much of a surprise for me to learn that Carole Lombard is one of her idols.

FILM FREAK CENTRAL: Hey--I wanted to mention that I sort of like Pyrates.
KYRA SEDGWICK: (laughs) I do, too. Kevin doesn't, but I do.

You've been working a lot lately with women directors. There aren't enough of them in the United States. Why not?
Oh gosh. I don't know, good question. I think we're sexist. Hollywood is sexist and age-ist, and that covers all the bases, I guess. But what I can do, and this is something that I've been really conscious of lately, is support them when I can--take a deeper look at what they can offer for me and for a project. And I can hire them, now. That's something that I've come to place where I can do. I recently hired Lisa Cholodenko.

Cavedweller.
Yes, that was a project that I really had in mind for a woman director from the start. I'm so happy about that project, we're getting some really great notices for it. It's played in a couple of small film festivals and that's really nice because it was made for Showtime so it's unusual that it even got that much distribution. But it's just the right kind of film for Showtime, you know. I think that it's better served, a female-driven piece like this: it'll get multiple showings and word of mouth. At least there, it doesn't have to slug it out with the latest Arnold Schwarzenegger... Is that a dated reference?

Never.
(laughs) Or how about Surviving Christmas? It won't have to fight with those kinds of films. But it's a little dark, and a little hopeful, too, I think--but not too neat.

Is it feeding into the problem to try to define the difference between male and female directors?
I don't know. Let me say that men run Hollywood and I think that they're afraid that women are going to get emotional or get their periods or something. I don't know how they think. I wonder if they think that women can't do the blockbusters. I know that Kathryn Bigelow was doing some for a while, but K-19 didn't do that well, I think, so they're not willing to give her a second chance. Men get more chances then women, truthfully, that's a big part of it, too. But hopefully it's changing--I try to be hopeful about these things instead of just complain about them--but... Yeah, I'm hopeful.

Was The Woodsman a project that, like Cavedweller, you saw as specific for a female director?
No, and honestly I can't compare and contrast. But speaking of Nicole [Kassell] as [the] director [of The Woodsman], I can say that she's incredibly sensitive and maybe it's that quality that...and it isn't unique to women...but that women may generally be more open to being vulnerable. To have a wider range of empathy--maybe that's more the female trait. But being an actor working with her, she sort of holds you in this gentle space and goes through it with you instead of keeping you in a voyeuristic remove. She really feels the moments with you and I found that empathy and insight to be invaluable. Particularly when you're dealing with a subject that's this sensitive.

Dangerous ground, pedophilia.
Well, the script was handled beautifully and you sort of hoped that it would be. But you just never know. It's really a leap of faith doing something like this. I really worried going in that I, that Kevin--that both of us would be crucified for doing this kind of movie. I worry about it more than Kevin does, I think. This is the kind of movie that if it didn't turn out like it did, it really has the potential to hurt us, to hurt our careers. As an artist, though, I don't really see it as my role to go too far beyond hearing the truth of the script and the human grounding of the characters and to have faith that the project will turn out to be as careful and respectful as we hoped.

Describe the ending of The Woodsman to me--is it optimistic?
Hopeful. I think it's hopeful. I thought of it as if Kevin's character was an addict, he is an addict, and like any addict like a recovering alcoholic, he'll never be okay, but that it's possible to be in recovery. I think that the character will never be free of his demons, of his addiction, and I think that the movie is realistic in suggesting that he won't.

How important is hope?
It's everything. I don't want dark for dark's sake, you know. There are some things that I see and I think, you know, I could have really done without seeing that. I don't want to do a movie that people wish that they'd never seen. I felt after Se7en that I'd give just about anything not to have some of those ideas in my head. Now, I'd love to work with David Fincher (laughs), but Se7en, that's the kind of film that I'm talking about a little bit. It's a little nihilistic, a little cold. It might be in tune with our times, but I recoil from it a little.

Tell me about our times.
Well, look, I've gotten a lot more political over the years. It's kind of hard not to, I think this is the most important election in my lifetime and I'm absolutely terrified, to be perfectly frank with you. I was in New York on 9/11, I feel that displacement and disorientation first hand, but I also feel like I have to be hopeful. I have to believe that things will work out.