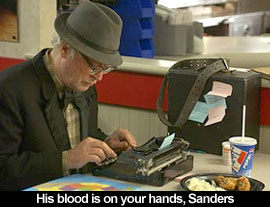 by Walter Chaw SPOILER WARNING IN EFFECT. There's nothing alive in Around the Bend, a story of three generations of men healing one another during a road trip. It's just as bad as it sounds: one contrivance piled upon another while Kentucky Fried Chicken looms large in nearly every scene and, by narrative necessity, figures in every critical plot point. The central metaphor for the film is a series of KFC bags, crumpled up and stuffed inside each other like Russian dolls--each entrusted with a couple of post-it notes containing cryptic messages that send our cardboard boys on a scavenger hunt across the Four Corners area of the western United States. It's the manner in which grand patriarch Henry (Michael Caine) decides he'll reveal to his grandson Jason (Josh Lucas) why and how his leg doesn't work right anymore. Jason has been raised by Henry ever since Jason's father, Turner (Christopher Walken), ran out on them when Jason was just a crippled tot; now Jason has a moppet of his own, saucer-eyed Zach (Jonah Bobo). Zach, regrettably, is saddled with the task of being the precious/precocious font of the film's alleged humour and the lion's share of its bittersweetness as well. Bad enough that Caine and Walken agreed to be in this mess; they consented to playing second fiddle to Tiny Tim, too.

The picture requires that Henry know in cartographical detail the exact location of every single Kentucky Fried Chicken franchise across three states, and yet at a critical moment taking place in Albuquerque, NM, a character declares that he must go to "New Mexico" and proceeds to drive for a long time, apparently to where he already is. It's a stupid thing, you see, but stupid isn't really the problem of Around the Bend. (Neither is Glenne Headly, who seems to be channelling the ghost of Teri Garr's performance from Young Frankenstein.) That it's technically inept (continuity is horrible--the last shot of the film, for example, sees a boy dancing in broad daylight but, because it's more poignant at twilight, the sun sets in a scene splice) is also not the problem of Around the Bend. No, the problem with Around the Bend is that it has actors like Walken, Caine, and even Lucas create characters involved in the essential Baby Boomer reconciliation drama--and treats them like meat for the grinder.

Caine manages to give that indie staple of an old coot quirkily fascinated with death a little spark, but he doesn't get to stick around, as Henry drops discreetly dead face-down on a Formica fast-food table as soon as he finishes his hilarious last will and testament. (Henry also predicts, seemingly to the minute, when his dog will die.) Later, another character kicks the bucket, though not before revealing an ugly secret that changes the mood of the piece from maudlin and trite to jarringly maudlin and trite. Around the Bend is the kind of failure that can't figure out a way to allow its characters to evolve organically and instead handcuffs them with independent-movie clichés, an old orange VW bus, and a bit of panicked over-writing involving Henry's archaeologist profession ("I wanted to leave it in the ground, but he loved digging up old shit!" (pause for subtlety to grow a mushroom cloud)). While the acting is fine, it doesn't matter, because the performances are only there to anonymously facilitate the dictates of the film's tortured narrative.

If I'm dwelling longer on this than I normally would on almost-identical bits of flotsam, it's because it seems like there was more potential here--in the participation of Walken and Caine alone, for God's sake. But Around the Bend is a disrespectful film, whatever the intent. It has a throwaway bit with an old woman suffering from dementia, for instance, and plays it for laughs. The picture devalues its cast and talks down to its audience, and when it can't gauge how things are going on their own, it throws in a reference to Star Wars or an eight-track tape, using a lot of '70s mellow-gold oldies to light the way. Around the Bend is a first film for writer-director Jordan Roberts, whose script is a straitjacket and whose direction is chaotic. Summed up as silhouettes backlit against sunsets, it's the John Denver school of filmmaking--with all the enfeebled schmaltz that implies. Originally published: October 27, 2004.