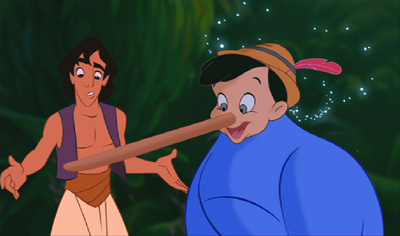 by Bill Chambers Jeffrey Katzenberg may have revived the American animated feature while he was at Disney, but only one of the hits his reign yielded is worth a second viewing. Where 1989's The Little Mermaid and especially 1991's nauseating Beauty and the Beast tried to pass themselves off as Golden Age Disney (1937 (Snow White and the Seven Dwarfs)-1950 (Cinderella), for argument's sake), before a certain stateliness loosened its grip on the house style, 1992's Aladdin took its cue from Uncle Walt's twilight years, the Sixties, when he was interested in telling--as he geared up to pass the torch, perhaps--mentor stories (The Sword in the Stone and The Jungle Book) and pop culture had finally caught up with his incongruous predilections for psychedelia and bohemianism. It's a risk to emulate the period considered the birth of the studio's Dark Ages, and Aladdin is the least spurious movie of Disney's renaissance because of it.

Seizing on the underdog intrigue of Arabian Nights' "Aladdin, or the Wonderful Lamp," Aladdin streamlines the original tale (a thing of broken-telephoneism at this point, anyway) through a process of consolidation. This means that Aladdin (voice of Scott Weinger) is parentless--"orphaned" seems too strong a word--while the Vizier, Jafar (Jonathan Freeman), loses a son but gains a wisecracking parrot named, heh, Iago (Gilbert Gottfried), all the better to distill Jafar's villainous plot to steal the throne from the Sultan (Douglas Seale) and his daughter, Princess Jasmine (Linda Larkin). Aladdin receives three as opposed to an inexhaustible number of wishes from the genie (Robin Williams) he conjures by rubbing the magic lamp, and the genie, relating to his calling as imprisonment, yearns for a future master to wish him free. It's essentially the Syd Field retelling, though traditional narrative forms can be as liberating for the draftsmen of feature-length cartoons as they are for genre filmmakers, since subversive ideas flower from archetype and they're least beset by the parameters of cartoons and horror movies.

Animation is also the perfect medium for a genie story--the wisher can be a true nihilist/onanist, something along the lines of Anthony Fremont in "The Twilight Zone" episode "It's a Good Life." It's a bit of a double-edged sword, however, because Toons are already these gravity-defying things that hardly need a whim caterer. Aladdin's solution-cum-innovation is to make its genie a meta-Toon that doesn't need a falling safe to flatten itself into a pancake; like the Merlin-Arthur relationship in the undervalued The Sword in the Stone, Genie's omnipotence boosts Aladdin's self-esteem by throwing his own untapped power into relief. Williams's volatile delivery has never been more suited to a character--and in enabling the animators' sense of mischief (it's doubtful they would have made those po-mo references isolated from Williams's contribution (including killer homages to Raiders of the Lost Ark, Cleopatra, and the "Night on Bald Mountain" segment from Fantasia) without the spectre of his manic performance to goad them), he honours Mel Blanc's legacy better than latter-day Looney Tunes have. Of course, Williams's profitable involvement proved to be a mixed blessing: As much as he elevated Aladdin, his wilfully anachronistic attitude--refreshing once--changed Disney for the worse. They went from trendsetters to trend followers by continuing on in a post-modern vein (witness the copycat celebrity impersonations of The Lion King duo Timon and Pumbaa), that newfound insecurity manifesting itself in transparently desperate feats of stunt casting.

Aladdin's success also, somewhat regrettably, instilled Disney with the confidence to tackle other exotic folklore that wound up getting merely homogenized. But while one can lay legitimate charges of xenophobia against the film, what with its glib dismissal of arranged marriages (something Sleeping Beauty put down as well, just not in an ethnic context), its myopic depictions of street peddlers, and its Middle East-accented villain vs. its Middle America-accented heroes, this is one of the most conscientious productions in the Disney canon. In addition to betraying liberal guilt at the conceptual level over matters of gluttony and enslavement, the movie flips the traditional royalty/commoner dynamic of Mouse House fare by assigning the peasant role to the male, and in so doing turns the oppression of Jasmine into a healthy critique of the princess fantasy--of luxury's toll on free will. (Isn't there something constructive about the bane of Jasmine's existence being that someday her prince will come?) There is, too, reverence for Arab culture in the film's aesthetic, with a great deal of the line work based on Sanskrit calligraphy. However humbly or unconsciously, this design unity pursues samadhi, the state of undifferentiated beingness in Patañjali's Yoga Sutra--a notion carried through by Aladdin's barrier-breaking friendship with the genie. Watching the Aladdin DVD, I was relieved to discover that I wasn't reading too much into Williams's Yiddishisms: Williams and Genie animator Eric Goldberg set out to imbue the film with the subtext of Arab-Jew solidarity. A whole new world, indeed.

THE DVD
The fourth title in Disney's Platinum line, Aladdin arrives on DVD in a THX-certified, 2-Disc Special Edition primed to astonish and inform. Tech jargon can't begin to describe the sensation of laying eyes on the 1.69:1 anamorphic widescreen transfer, a thing of unwavering impeccability save for negligible banding artifacts in areas of graduated colour. Those patrons of The Lion King's "Disney Enhanced Home Theater Mix" (henceforth EHTM) will have some inkling of what to expect from this disc's virile Dolby Digital 5.1 EHTM, which cohabits the platter with the circa 1992 audio (an accomplished four-channel recording that's also on board in DD 5.1). Your mileage may vary, but in toggling back and forth, I found that the action-oriented scenes were best served by the EHTM and the musical numbers by the '92 mix. Singing bleeds into the surrounds with the EHTM and frequently sounds clipped as a result, but that Cave of Wonders sequence is demonstration fodder up there with the DTS version of Saving Private Ryan. Note that Disney has not restored the verse of "Arabian Nights" ("Where they cut off your ear if they don't like your face/It's barbaric, but hey it's home") that caught heat during Aladdin's theatrical run--posterity, we quickly learned, is a low priority in the preparation of these Platinum Editions.

Individual commentary tracks from the "Filmmakers" (co-directors/co-screenwriter John Musker and Ron Clements, producer Amy Pell) and "Animators" (Will Finn, Goldberg, Glen Keane, Andreas Deja) provide a couple of reasonably engaging ways to spend 90 minutes, while Pop Up Fun Facts suitably complement either yakker. What's nice is not having to hear unctuous Don Hahn for a change, which may or may not explain why Katzenberg's absolute power is suddenly an open topic after the former executive went unrecognized for playing an integral part in the success of both Beauty and the Beast and The Lion King on the Platinum releases of those films. (Thank goodness, too: I sure would hate for Goldberg to have not had the grounds for telling his priceless anecdote about Katzenberg's less than ironic bewilderment that audiences weren't literally applauding "Friend Like Me.") Neither do the said "Fun Facts" shy away from potential controversy (they outright admit that the late lyricist Howard Ashman, Aladdin's true progenitor, died of AIDS)--unfortunately, they perpetuate the occasional misnomer, such as that "Peter Lorre is known for...horror films."

A smattering of archival material and a revolting selection of music videos supplement the first platter. The latter falls under Music & More, where "American Idol" Clay Aiken blunders through the elided Ashman tune "Proud of Your Boy" while American Idiots Jessica Simpson and Nick Lachey butcher "A Whole New World." (Regina Bell & Peabo Bryson's 1992 video for the same is on board as well.) Opening up the inside flap of the Aladdin DVD's cardboard sleeve and seeing that defective fembot Simpson staring back facilitates vivid flashbacks to the foldout poster of Michael Jackson mugging with E.T. that sullied copies of the E.T. LP; trouble is, the Aladdin case is too small to throw darts at. Incredibly, regardless of the fact that the Aiken and Coneheads clips are unsupported by anything resembling production values, each is appended by a behind-the-scenes featurette. Le sigh.

Video introductions from Musker, Clements, and/or storyboard artist Ed Gombert preface four Deleted Songs, only the first of which ("Proud of Your Boy") credits the performance to composer Alan Menken (though I assume that Menken recorded all of these demos himself). Visual accompaniment for "Proud of Your Boy," "You Can Count on Me," the deliciously mean-spirited "Humiliate the Boy," and "Why Me" proper comes in the form of progressively sloppy thumbnail sketches. Doodles also convey two Deleted Scenes that landed on the chopping block once "de facto executioners" Ted Elliott and Terry Rossio radically overhauled the shooting script. (Aladdin's mom is a fixture of the many abandoned bits of business sprinkled throughout the set.) A Genie-centric commercial for the Make-A-Wish Foundation plus trailers for the upcoming Bambi Platinum Edition, Pooh's Heffalump Movie, and "The Aladdin DVD Trilogy" precede the main menu and round out Disc 1, whose menus, like those of the second DVD, contain snatches of Menken's score in full 5.1.

Games and Activities
Go on a vertigo-inducing flying-carpet ride to save Jasmine from an abstract fate in the well-rendered Aladdin's Magic Carpet Adventure, take a virtual tour of Genie's homestead in Inside the Genie's Lamp, and wish for a world without Jessica Simpson with the Wishes Game.

Backstage Disney
A Diamond in the Rough: The Making of Aladdin (110 mins.)
As I avoided the two interactive methods of watching this feature-length special, I won't be doing a piecemeal breakdown. Footage from "An Evening with the Creators of Aladdin," hosted by Leonard Maltin and attended by CalArts students, acts--along with greenroom 'interviews' conducted by an inexplicably amusing Gottfried--as a framing device for this encyclopaedic documentary. It's here that you'll gain firsthand knowledge of Goldberg's Genie demo reel (lip-synched to Williams's comedy album "Reality... What a Concept") and get to view a simultaneously breathtaking and embarrassing recording session for "A Whole New World" with its rightful singers, Brad Kane and Lea Salonga. The proceedings pause for a biographical tribute to the late NEW YORKER caricaturist Al Hirschfeld (Goldberg affected Hirschfeld's technique for the genie), then resume for a segment on animator Mark Henn's sister, a high school yearbook photo of whom served as the facial model for Jasmine. It's comprehensive bordering on exhaustive, in other words, and the piece only really stumbles in the homestretch, when it overindulges the fairly vapid vocal talent. Williams, for what it's worth, is a no-show the entire package (old contract disputes die hard), although there's plenty of footage from his recording sessions excerpted in "A Diamond in the Rough...".

Alan Menken: Musical Renaissance Man (20 mins.)
A hagiography of Menken that nevertheless has the humility to offer one last moment of silence for his dearly departed collaborator. But whatever Menken's formidable musical gifts, the featurette's ultimate lesson is that he isn't a terribly compelling singer.

The Art of Aladdin (9 mins.)
Another of Disney's de rigueur art reviews, this one narrated by Musker and Clements. On its own it's an in-depth study of, among other things, the allegorical use of colour in Aladdin, but as a footnote to the other extras, it's a little redundant.