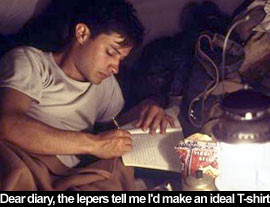 by Walter Chaw Adapting respective memoirs by then-young Cuban-by-way-of-Argentine revolutionary Ché Guevara (Gael García Bernal) and his best friend Alberto Granado (Rodrigo De la Serna) that documented their Kerouac-ian odyssey down the spine of South America to find the soul of their country, Walter Salles's The Motorcycle Diaries is difficult at best. It's a road movie and a good one, as far as it goes, but it lacks the fire of change of something like Easy Rider in its substitution of a picaresque travelogue lightly spiced with delightful romantic misunderstandings for Peter Fonda's swiftly tilting planet and deserts of the real. Easy Rider talks about the dying of the light; The Motorcycle Diaries talks about how doe-eyed Ernesto Guevara became Ché, the Hoffa of Latin America and eventually the most reproduced and mass-marketed image since Marilyn Monroe's.

The film has been shot in a highly naturalistic style and filled with performances almost unconscious in their ease, and nothing much of consequence happens for the bulk of its extended running time--a strategy that seems to work to The Motorcycle Diaries' benefit, as for the longest time the picture plays like any arthouse time-siphon that happens to have as one of its characters someone we know will eventually be someone we know. The problem comes when all that naturalism is interrupted by montages monumentalizing the diverse rural poor through NATIONAL GEOGRAPHIC stills, though they're only part of the late-in-the-game idol-making in which Salles engages. Salles needed to have decided between making a picture about a young man who would someday be a champion of the people (and later a ruthless revolutionary) and making a picture about two guys discovering their sense of justice while coming of age on the pounded dirt trails of their native land.

Unfailingly, however, Guevara is cast as an honest-to-a-fault, saintly figure, so that when his death is revealed in a series of end-titles, it feeds into the image of Guevara as a martyr--the patron saint of freshman year, sharing dorm-room wall space with Jerry Garcia and that Robert Doisneau photograph of two people kissing in Paris ("Le Basier de L'Hotel de Vilne", 1950). As soon as The Motorcycle Diaries becomes a hagiography, it no longer matters how hard the film has tried to paint a portrait of Guevara in his youth to represent any sensitive young man in any time or place discovering that the world isn't fair. In this way, the film is suddenly specifically political rather than generally, archetypically affecting.

A late exchange between a young leper at a colony in Venezuela at which Guevara and Granado volunteer their time and expertise (Guevara was a medical student, Granado a biochemist) is a beautiful grace note for what works in the piece. She says: "Life is pain," and Guevara replies, "Yeah, it's really fucked up." Had The Motorcycle Diaries let that be the end of the conversation, allowing the audience fill in the gaps separating this boy on the edge of maturity from the outsized destiny he'd fulfill, it might've yielded a counter-cultural classic. But a few toasts, heroic swims, and gauzy 'scope landscapes scored with heroic swells later, that delicate, powerful connective tissue of recognition becomes a scramble for trivia and the kind of contextualization that breeds irony. It's the murder of that exhilarating moment of recognition, that electric second in all our lives when our beliefs are shattered and defined in the same instant. Originally published: September 24, 2004.