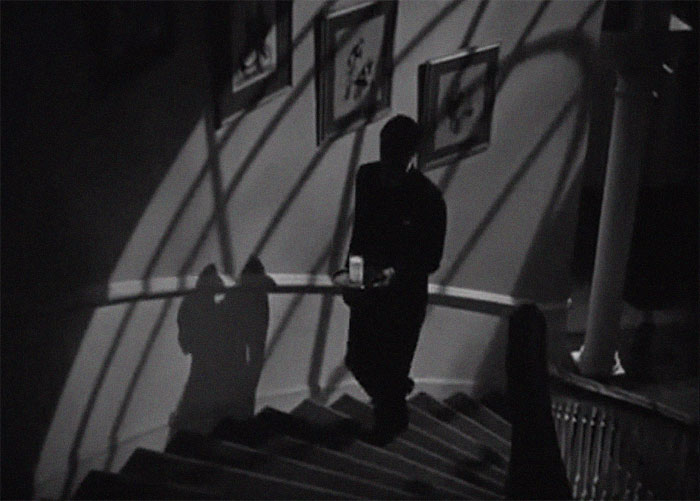 by Walter Chaw In truth, watching any of Alfred Hitchcock's American films is like hearing the voice of your master. So it is even with 1941's Suspicion: Probably the most compromised of Hitchcock's major pictures, it nevertheless sports a trio of sequences that rank among his best. An early flirtation between Cary Grant's layabout playboy Johnnie Aysgarth and Joan Fontaine's unlikely take on a dowdy spinster, for instance, looking for all the world like a rape and featuring brilliant, Lubitsch-esque purse-play, is as dense a five minutes as whole pictures. (The second virtuoso sequence involves a staircase and a glass of milk lit from inside the liquid while the third is a fantasy that transforms laughter into the howls of a dying man.) So coy and hesitating that it's a lot like courting a eunuch, Suspicion is not easy to like, but it does offer a glimpse of what's possible within a studio system that won't allow one of its marquee players to play a villain. The picture gives lie to the idea that creative people suddenly lose their creativity when they move to Hollywood: It's still there, it just goes (in this case, deep) underground.

Hitchcock is in every frame of this film, literally--mailing a letter that was to have been the way that murderous Johnnie receives his post-film comeuppance--and thematically through his obsessions with eyeglasses as the source of knowledge and power, trains as the suggestion of sex and sophistication, perilous perches as the places where seismic changes occur, and morbid dinner conversations as subversions of the social strata. (Not to mention the sort of symbolic sexual acrobatics that compare vaginas to purses and sexual awakening to horses.) Early on, a photographer is thwarted, and Hitchcock spends a second showing the man's displeasure before introducing Fontaine's Lina rapturously astride a frothing steed and Johnnie avoiding the curious gaze of the gathered glitterati. Suspicion, starting at the races, establishes out of the gate that it's going to be about the misinterpretation of appearances: Johnnie is not actually a wallflower but rather the talk of the town (the cock of the walk, as it were), and by wedding the outwardly confident yet truthfully meek Lina, he has saved her from what her parents are sure will be a lifetime of loneliness. But did he do it with designs on her modest inheritance?

Such is the groundwork for Lina's titular suspicion of Johnnie's intentions. Perhaps he wants to kill her to pay off his debts and strike up a business with hale chum Beaky (Nigel Bruce), or perhaps he'd prefer to kill Beaky and feed his entrepreneurial bug himself. Hitchcock, throughout production, hoped that the higher-ups would allow him to film the intended ending of Johnnie polishing off poor Lina and then, unwittingly, mailing his own confession to Lina's mother--and that impression of bets hedged hamstrings the flow of the piece. (The conclusion, in particular, feels artificial and tacked-on, guilty of the sort of mawkish sentimentality that Hitchcock avoids when he's not using it like a satiric weapon.) Still, there's something about Grant's performance that carries the film; the whiff of anxiety and facile insincerity that fuels Grant's iconic turns in screwball comedies serves him well as the slightly askew Johnnie. He's charming, but hungry, too--though of course it's Fontaine who wins the Oscar for the film. That being said, it's the very fact that Grant is the glue that holds Suspicion together which relegates it to the second tier of Hitchcock films: Without the ability to follow through with his vision of an ironic restoration--there's nothing shocking in a nice girl getting married to a nice boy, after all--the great tragedy of the picture is Beaky's premature demise and a lot of loose Hitchcockian undercurrents desperately in need of a MacGuffin.

THE DVD
Suspicion comes to DVD from Warner in a crisp fullscreen b&w transfer that beautifully preserves Hitchcock and DP Harry Stradling's stark chiaroscuro images. There are the expected age-related artifacts now and again, but they're so infrequent and subtle that it's quibble to even make mention of them. (Ditto the occasional streaking and fluctuations in grain.) A Dolby 1.0 mono audio mix is similarly clear with good volume and dialogue distinguishable and distinct from Franz Waxman's unremarkable score. A new documentary by king of drab supplementary material Laurent Bouzereau, "Before the Fact: Suspicious Hitchcock" (22 mins.), collects the usual suspects (the always-delightful Pat Hitchcock O'Connell, the always-fallible author/historian Bill Krohn, the always-quick-to-Rich Little Peter Bogdanovich) as a series of talking-heads discussing Suspicion's inferior source material, the difficulties Hitchcock had with RKO, and the fact that Fontaine won an Oscar for her work here likely as consolation for her un-awarded work in the astonishing Rebecca. A theatrical trailer rounds out this very fine disc for a picture whose legacy is one of missed opportunities, apocryphal stories, and the small-mindedness of the moneymen. Suspicion is timeless. And for all the wrong reasons. Originally published: September 7, 2004.