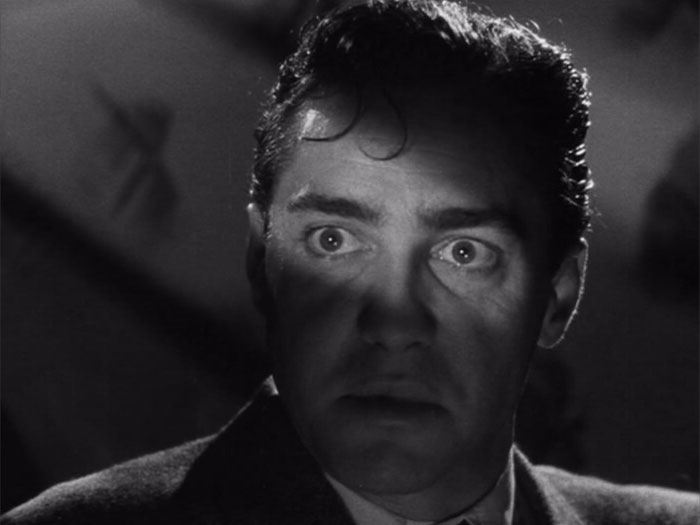 by Walter Chaw Blame it on the subject matter: Stage Fright, especially for postwar Hitchcock, is all elbows. Its technique is its narrative, plot, character, and motive--something that's a relative rarity in the master's oeuvre despite his notoriously stringent preparation and acumen. And though it works pretty well as an academic inquiry into how the artificiality of the stage can comment with eloquence, "Hamlet"-like, on the bigger picture, the film stumbles along in fits and starts, pulled forward by its mechanism instead of anything like momentum or logic. In truth, I wonder if the "play-within-a-play" trope doesn't work better as either microcosm (as in the final confession of I Confess) or leitmotif (as in the numerous references to performance in North by Northwest, which most likely owes its title to a line about pretending to be crazy from "Hamlet"). Of particular issue is one of Marlene Dietrich's mannered turns, which is potentially excusable (given the staginess of the piece), and a horrible score by Leighton Lucas, which isn't. Still a Hitchcock film in his middle-period, however, Stage Fright, no doubt owing to its nature, is particularly focused in on disguises, perceptions, mirrors, eyeglasses, and cigarettes--finding our hero, Eve (Jane Wyman, fantastic), taking on the guise of a Dorothy Parker-esque reporter at one moment and a maid infiltrating a fatale's lair at another, all for the cause of a suspect flashback from an unreliable narrator.

Opening with curtains drawing back from its London setting, Stage Fright's central concern is whether Eve will be able to burrow beneath the artifice and deception of the acting kind--will be able to triumph over willful deceptions, myriad shifts in sympathy, and mercurial behaviours. Scenes of double-talk and double-time backtracking--such as Eve's better object choice, Inspector "Ordinary" Smith (Michael Wilding), visiting her parents in a cloud of misdirection, or a secret shared by Eve and her father (Alastair Sim) that they have become complicit in the escape of Eve's maybe-murderous boyfriend--segue into a ridiculous musical number starring Dietrich, performing on stage in a white gown in a metaphor for the marionette's dance of the rest of the picture. It's that complexity that ultimately undermines the production, preying on Hitchcock's notable weakness: occasionally telling too much to an audience that I suspect he respected less than he did his actors, setting up a series of long talks and plot recaps in lieu of anything actually happening. Throughout, though, are bizarre moments (a monologue about a dog that hated its owner; a line from Eve delivered as she's facing "up-stage") that make the picture impossible to completely disregard. A running joke of Eve acting the Dr. Watson to Smith's Sherlock Holmes indicates a recognition of sorts that Stage Fright is something of a chamber piece--and no matter the innovation of an unreliable narrator, something of an antiquated bore, too.

THE DVD
The source print for Warner's DVD release of Stage Fright has seen better days. From the first frame to the last, lines mar the video along with the more usual blooming and grain epidemic to flicks of this age, but as Warner's other Signature line titles demonstrated, there exist elements from the period in finer condition, if not necessarily for this film. The excellence of the remaining transfers in the studio's Hitchcock box set of course buys Warner the benefit of doubt. Similarly, the picture's centre-channel mono audio is a little shaky--tinny and, I guess the word is "reedy," in its dialogue at the volumes you have to play it in order to catch all the rapid-fire patter. Laurent Bouzereau's standard documentary "Hitchcock and Stage Fright" (20 mins.) covers the usual ground with the usual suspects: Robert Osbourne, Peter Bogdanovich, Pat Hitchcock O'Connell, and so forth, with an archival clip featuring Wyman and various other personalities (Psycho II helmer Richard Franklin, for instance) in orbit around this picture as they recall on-set anecdotes and provide very basic analyses of certain themes. Not indispensable, but good for the neophyte. A trailer--which is essentially Wyman receiving an award from PHOTOPLAY MAGAZINE clipped together with a sort of haphazard, hackneyed, bemused teaser that sounds like it's trying to crib the style of Hitchcock's own deadpan humour--rounds out the disc. Originally published: September 7, 2004.