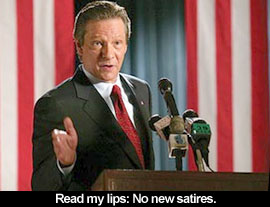 by Walter Chaw The Summitville Mine Disaster in Colorado left over 20 miles of the Alamosa river "dead," so contaminated by waste materials (cyanide chief among them) that it very simply killed all the fish. A good thing, I guess, that there wasn't a sizable human population downstream. A superfund site now and fast becoming a sore election point in a Senate race between A.G. Ken Salazar and beer magnate Pete Coors as third-party interests begin a round of misleading, venomous attack ads, Summitville represents in a way a handy microcosm of the ugliness of the Kerry/Bush presidential election. There's a point when third-party interests and smear campaigns, on either side of the divide, start to demean all of us as a people, feeding on our worst instincts and treating us like dumb, mute animals. The political discourse in our country has devolved into a playground jibe match where it's easy to forget in the mud storm who's the rubber and who's the glue; no great surprise that the general death of conversation in our culture includes the whole spectrum of politics.

No surprise, either, that so many of the arts now have turned overtly, stultifyingly political, favouring the platform over the grace until what's left is an inchoate screed instead of a film of any kind of quality. When Tarantino as head of the Cannes jury assured that Michael Moore's Fahrenheit 9/11 won the Palme d'Or because it was the best film in competition, in a very real way he declared that the cretins have won and that the consideration of the medium of cinema as a serious artform was done. Flicks like Fahrenheit 9/11 are pamphlets for the illiterate, all of loud, obvious illustrations and outlandish caricatures, dutifully distributed amongst the faithful while strengthening the resolve of the opposition. What good has Fahrenheit 9/11 done except inflame the dopey? (For equal opportunity dope-inflammation, see also The Passion of the Christ.)

So it comes as something of a relief to see a filmmaker like John Sayles--known for being smart and political and artistically solid (Matewan, City of Hope, Men with Guns)--wade into the question of Bush II with both barrels blazing. There is at least the hope with Sayles that something of resonance and historical importance might bob to the surface of the poisoned reservoir of public discourse. Abandon hope. Sayles's Silver City, shot in Colorado and dealing in large part with the Summitville Mine Disaster, seeks to lampoon our beloved leader's lovable buffoonery, with idiot gubernatorial candidate Dickie Pilager (Chris Cooper) floating for the whole of his jackass career on the good graces of a wealthy and powerful political family, a Karl Rove Svengali-figure named Chuck Raven (Richard Dreyfuss) holding the strings. From "Pilager" (pronounced "pillager") to carrion bird Raven to the set-up wherein the "grammatically challenged" Pilager hooks a cadaver while filming a down-home fly-fishing campaign spot, there's nothing subtle about the picture. A tagline for Silver City reads: "Any resemblance to the President of the United States is unavoidable."

Sayles splits his time between a fairly sharp Being There satire with an increasingly boring and hermetically-sealed murder mystery surrounding the cover-up of a mining disaster. In Sayles's Silver City, everybody seems to know everybody else and not one of the over twenty speaking parts fails to serve a role in the shenanigans. When wet blanket Danny O'Brian (Danny Huston, John's son and Anjelica's half-brother), the prototypical noir hero minus charisma, interviews a pair of random illegal migrant workers, then, take notes, because chances are minuscule (but good, wink, wink) that they'll have firsthand knowledge of the whole shooting match. A lot of Sayles's films open with something hidden getting unearthed (Lone Star, Limbo, Sunshine State) and most of them deal with the idea of oral history and the function of storytelling, but Silver City, though it does the one and aspires towards the other (what's more hearsay and mythmaking than a political campaign?), seems handcuffed by Sayles's politics and his three-films-long slide into garrulous mediocrity. While the jabs at Dubya are pretty good and feel close to the mark (a show-pony with a good pedigree and a lousy gait, all hat and no cattle, as it were), the entire half of the film dealing with the Danny O'Brian character is flat and unbelievable.

When Maria Bello, playing a hotshot journalist and Danny's ex-lover, proclaims that Danny was the best boyfriend she ever had, everyone in the audience laughs reflexively. It's Sofia Coppola in Godfather III syndrome: a performance so badly out of tune that it undermines the veracity of every key relationship within the film. Huston is outdistanced by this material to the degree that he's not believable as anything approaching desirable or even competent. His flirtation with Pilager black sheep Daryl Hannah, his dogged investigation of the floater that opens the film, his sparring with Raven, his consultation with an Internet tabloid run by Tim Roth--none of it registers as anything but a gymnastic contrivance of plot. These people would never interact in this way with this personality in this context.

Silver City suffers from a bad case of schizophrenia. It can't channel its outrage for long enough to leave much of a mark. We know Sayles is pissed off about something--whether it be the exploitation of illegal aliens (but Sayles is a die-hard Union man) or the malfeasance of a politically corrupt, despotically-driven administration (but aren't they all?), we're not sure. If I were Sayles, I'd be most aggravated about sharp filmmakers who can't get it together long enough to steady their aim in a time of crisis, resorting instead to tilting at windmills with dull ripostes. Originally published: September 22, 2004.