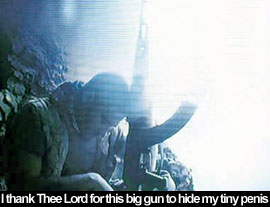 Don "Lars" Larson (George Calil) is representative of everything that the rest of the world despises about Americans: he's arrogant, stupid, reckless, and ill-informed. He goes to Afghanistan a year after 9/11 to avenge some secret loss, engaging the services of translator Wali (Wali Razaqi) who fast loses sympathy as he collapses into the accidental toady role where everything Bwana says is eye-rolling but acceded to. Together, this Hope/Crosby take the road to Kabul, getting arrested on purpose to "learn the real truth beneath the lies, man" and antagonizing weapons dealers with the hope of...what? I haven't the foggiest idea. The stated goal is to track down the big bad wolf in the proverbial forest, but how pissing thugs off left and right will aid in that purpose, I couldn't begin to imagine.

The preposterous premise of the flick is that eight tapes (the titular "September Tapes," I suppose) are discovered near the Afghan-Pakistani border along with a digital voice recorder that Lars uses to create an audio diary. The contents of said diary run as narrative throughout the piece whenever it's feared, I guess, that people are losing either the thread or interest. Truth is, a voiceover seldom, if ever, ameliorates audience non-participation, and more often than not it incites audience revolt. September Tapes is made by people who've seen Apocalypse Now, Medium Cool, and Welcome to Sarajevo without understanding what made those films work as something other than a leech of the events that inspired them. A series of matching shots--an old man's eye into a camel's eye into a full moon into a Zippo flame--elevates this low-rent flick to pretentious, giving lie simultaneously to the premise of the piece that this was all shot guerrilla-style. It's a high-school kid's understanding of loss and tragedy, of responsibility and grief, and that it's found a distributor speaks volumes about how twisted our perception of reality has become. The media (news/entertainment) has a lot to answer for if this (and Michael Moore's only marginally better-informed Fahrenheit 9/11) is what passes for protest anymore. Originally published: September 22, 2004.