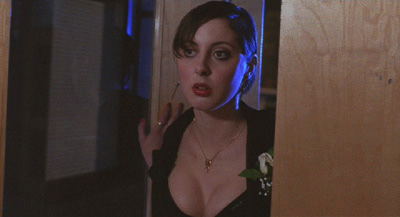 Hot on the heels of Confessions of a Teenage Drama Queen and Mean Girls, Saved! presents the same evil-girl-clique-victimizes-good-girl formula that is still defined by the wicked Machiavellian brilliance of Heathers, the last word on eloquence and intelligence in the bully sub-genre of teensploitation. In the wake of Columbine and the end-of-the-millennium spate of school mayhem, the greatest disappointment isn't the unabated gratification of the jock set, but the fact that school-based satires have yet to find the courage to address the absurdity of reaction post-atrocity while continuing to produce school-based satires at an unabated clip. If anything speaks to the ultimate triumph of the guilty bourgeoisie and the ineffectual leadership in charge of our nation's public schools, it's the glaring inadequacy of our cinema, that most agile and sensitive of our cultural barometers, in reproducing the voice of the oppressed. It's up to television's "Freaks and Geeks" (was, anyway) and NPR's stable of gifted monologists (Sarah Vowell, Dave Eggars, David Sedaris, and so on) to pick up the considerable slack.

For about thirty minutes, Saved! threatens to have something to say, striking a few ultra-conservative targets in a way that fast reveals small-mindedness. Casting Mandy Moore as head bitch Hilary, i.e. the leader of a redundantly insular group of perfect Christian virgin brides, is sort of inspired, except that as played by Moore and ultimately let off the hook by Dannelly, it's not so much clever as frighteningly predetermined. Moore and her lily-white image are eternally at odds with the roles she compulsively accepts: young women rewarded for their bad behaviour. Playing a Jesus freak who needs to learn a lesson about grace isn't a departure for her, it's a career statement. Hilary's Heathers include virgin (soon to be the other) Mary (Jena Malone) and a Vietnamese girl (Elizabeth Thai) adopted by an African-American family visual gag ripped off from Drop Dead Gorgeous, a movie that was actually subversive and funny. When Mary falls off the pulpit by trying to cure her boyfriend (curiously named Chad Faust) of his homosexuality and gets knocked up in the process, she discovers a whole teeming underworld of sympathetic likable losers, led by token Jew Cassandra (Eva Amurri), wheelchair-bound smirker Roland (Macaulay Culkin), and zoned-out skater Patrick (Patrick Fugit).

So the ingredients are in place for a picture that matters, but beginning with the increasingly devalued Sundance stamp of approval, Saved! flies apart with surprising violence. It speaks for no one above the age of fourteen, naïfs first dipping their proverbial toes into the theological debate and bringing with them only a thong of prenatal outrage without the water wings of fully-formed complaint and honest questioning. The extremes of belief aren't charted on a straight line, but a circle, and when you fall enough off one side or another, you find yourself meeting your opposite at the bottom. So ultra-liberal dogma is as loathsome as ultra-conservative dogma--is, in fact, almost impossible to distinguish from the other. The common refrain from Saved!'s creative camp is that it's not an anti-Christian film so much as a pro-tolerance film, a funny thing to maintain given the lengths to which the picture goes to specifically castigate a certain group of people while not only wagging a patronizing finger at its audience, but also espousing its philosophy of unconditional love and global inclusion in an uncompromisingly stringent outline. What's the difference between a wild-eyed born-again Christian and a militant atheist? You tell me. Originally published: June 11, 2004.

THE DVD
by Bill Chambers MGM presents Saved! on DVD in a 1.85:1 anamorphic widescreen transfer with Dolby Digital 5.1 sound. The image makes hairpin turns from passable to, well, divine, with the opening credits sequence looking considerably worse than the remainder of the film due to washed-out colours and flat detail. Another scene, Macaulay Culkin's smoking-area meet-cute with Eva Amurri, has a similarly lacklustre appearance, which may or may not have something to do with its status as the first thing the production got in the can. The audio is bland but clear--only a de facto concert performance from Mandy Moore confirms that the movie isn't in mono. Director Brian Dannelly (pronounced "Donnelly"), co-writer Michael Urban, and co-producer Sandy Stern join forces for one of two commentary tracks, the second of which pairs actresses Jena Malone and Moore. These are surprisingly and perhaps disappointingly apolitical yakkers that concentrate on celebrating low-budget ingenuity and creative unity; for what it's worth, Urban seems barely there while Moore has improved her game since the Chasing Liberty disc. Unless he's being tongue-in-cheek, Dannelly severs the hanging thread of his credibility by admitting that a shot of a steamed-up window is paying homage to Titanic.

Other extras include: the shallow making-of featurette--and I do mean ette--"Heaven Help Us" (4 mins.); a selection of eleven AVID-quality deleted/extended sequences that in many cases, such as the "Hilary Faye vs. Cassandra montage," are indistinguishable from what we see in the final product; four "bloopers"--really improvs gone awry; "Saved Revelations," i.e., answers via outtakes to burning questions like "What's Hilary Faye really looking at?" (in this instance, she's espied Amurri making love to her handicapped boyfriend (Culkin), but we can't send a message as positive as a healthy sexual relationship between an able-bodied individual and a disabled one now, can we?); and Saved!'s theatrical trailer. Previews for Bubba Ho-Tep, Touching the Void, Intermission, Barbershop 2: Back in Business, Walking Tall, Soul Plane, and Dorm Daze round out the platter. Originally published: September 20, 2004.