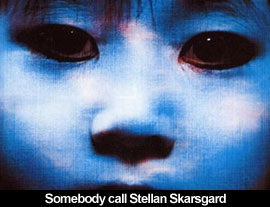 by Walter Chaw There are a couple of startling moments in Takashi Shimizu's Ju-On: The Grudge buried in a mountain of mendacity. It looks cheap and it feels cheap--something like Takashi Miike's Visitor Q without the barrier-breaking, society-challenging audacity, or a television drama with low production values and a hilariously inept cast. It's kids playing at spooky: It'll work a time or two, but mostly it'll be clumsy and stilted. Mainly, it seems as though Ju-On: The Grudge hopes that you haven't seen the movies of Hideo Nakata and Kiyoshi Kurosawa, because suddenly we're not even talking the same ballpark anymore.

So there's a little '70s Deco-trash house (student housing of the damned) haunted by a pale little boy killed five years previous by his rampaging father. Now he's back with a grudge, slaying all who enter the house (and more people go into this house than commuters traverse Grand Central Station--the film is the third of four Ju-On instalments to date) by infecting them with rage. Possibly taking a cue from The Shining in the idea that a person's bad thoughts haunt the place of their malfeasance or demise and then contaminate sensitive visitors, the film's execution approaches a primer on the tricks that hack directors use when atmospherics are beyond their reach, mistaking "startling" for "scary" at every turn.

At the root of it there's the possibility for an exploration of how discomfort is being mined from traditional bedrock tenets of Japanese culture subsumed by the rush of modernity. An old woman living with her son and daughter-in-law appears to be neglected throughout one segment (Ju-On: The Grudge is a series of loosely-connected vignettes), her presence as a demented, drooling cipher soiling herself on her little straw mat as family and various authorities run around her willy-nilly so marked it's almost self-parody. Later, an old man in a wheelchair playing peek-a-boo with an invisible child underscores the idea that the only element that doesn't ignore the elderly is the supernatural. But in Shimizu's hands the generational divide, fertile ground for many seminal horror films, is just standard fright fodder seeking to find unease in the innocuous. It's like playing the Psycho sting under a picture of a bowl of fruit: It's not frightening, it just sounds that way.

Ju-On: The Grudge is derivative pop. It's a flattening of themes and images that first found life in stuff like Ringu, Dark Water, Cure, The Evil Dead, The Exorcist, The Changeling, and on and on--a parsing of better sources released in a trickle with what feels like reluctance and a little embarrassment. A spoof threatens to break out at any moment: If it's not the terrible CGI smoke monster, it's the soporific bogey with the crazy eyes, so omnipresent that you expect at any moment to find her popping out of the toaster. Lifeless, lumbering, and mindless--good for a monster, not so good for a monster movie. Originally published: September 3, 2004.