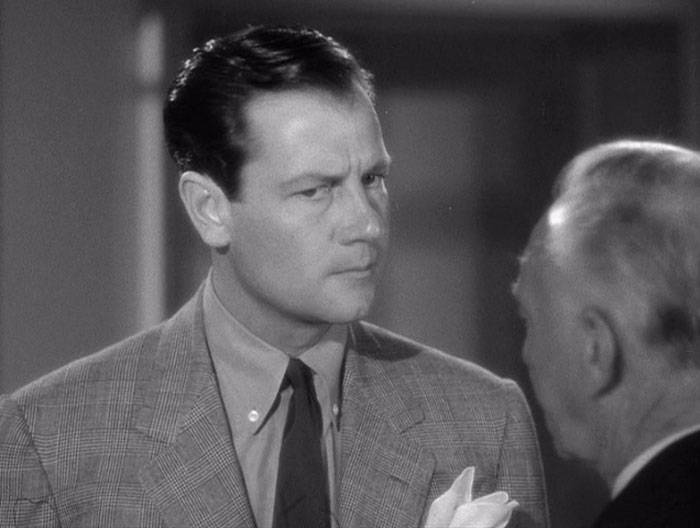 by Walter Chaw Largely dismissed as a jingoistic anomaly in the generally anti-establishment Hitchcock canon (and dwarfed by the meatier fort/da of the same year's Rebecca), Foreign Correspondent is arguably a superior representation of the screwball genre to which the later Mr. and Mrs. Smith aspired. That it has political undertones is undeniable (its spies and hunters plot a throwback to Hitch's Gaumont years), but most conspicuous is the kind of macabre visual wit that would define the bulk of Hitchcock's early American output. Consider a haunting sequence with titular journalist Huntley Haverstock (Joel McCrea) trying to find a missing getaway car in a Dutch field dotted with windmills that begins with a gust of wind blowing off his hat (a castration metaphor--the film is full of them) as his girl-Friday Carol Fisher (Laraine Day) laughs uncontrollably, proceeds to the inside of a false mill where Haverstock is nearly discovered when he gets his coat caught in gears, and ends with an exchange with non-English speaking Dutch police resolved by one of Hitch's precocious little-girl characters. With an intimidating self-possession, an already mature Hitchcock presents in fast fashion a dizzying series of technical gags (the suspicious windmill suspicious because it's turning in the wrong direction--compare to the tennis crowd of Strangers on a Train and this film's own chase beneath a canopy of umbrellas); a preoccupation with birds as representatives of the corruption of social order (introduced in Young and Innocent, it became a central throughline in Hitchcock's career); a serio-comic scene of near-discovery; and a slapstick vignette that makes asses of the police, Hitch's favourite target.

Haverstock himself comes off as a parody of American arrogance, huffing his way through the picture with a chip on his shoulder the size and shape of Texas. His constant affirmations of patriotism are instantly suspect for the insouciance of his character; when the picture ends with him pontificating like Kevin McCarthy to the strains of "The Star-Spangled Banner," the only appropriate response is to giggle. His romancing of Fisher, too, is a convenience of the genre, one referenced first by Hitchcock obscuring the initial part of the central courtship conversation under background noise, then by the dialogue itself, with Haverstock referencing how Fisher's forwardness has the effect of shortening their love scene. Offsetting the picture's pervasive air of bemusement (no surprise that co-star Robert Benchley contributed heavily to the shooting script) is a series of action set-pieces culminating in a still-harrowing plane crash and establishing Hitchcock early as a master of not only suspense, but also special effects and stuntwork. Viewed in conjunction with its VistaVision counterpart North by Northwest (and, backwards glancing, The Lady Vanishes), it represents the wellspring for the suave sex comedy/elaborate action sequence alchemy of the better James Bond pictures. (Indeed, lovable lunk Haverstock is to debonair Brit colleague Scott ffolliott (George Sanders) what CIA stalwart Felix Leiter is to Bond in the Ian Fleming mythology.) Too slight a picture for serious study but one so loaded with Hitchcock's evolving signatures (including lenses, cigarettes, and ersatz fishbowls) that it's due a resurrection, Foreign Correspondent is funny on purpose, and that, obviously, makes all the difference in the world.

THE DVD
Although the transfer for Warner's DVD release of Foreign Correspondent--by itself or in its Signature Collection box set--was struck from a print flawed with the occasional line, nicked reel change, and blooming artifact, the fullscreen presentation itself seems bright and clean. It looks better than fine for the most part, while the original mono soundtrack, remastered for the DVD in Dolby 1.0, is clear if dropping occasionally into the tinny. Laurent Bouzereau's retrospective making-of "Personal History: Foreign Hitchcock" (34 mins.) follows the basic structure of his work on the director, collecting historians like Rudy Behlmer and Robert Osbourne to speak about history and personalities like Nat and Peter Benchley and Patricia Hitchcock O'Connell to tell behind-the-scenes intrigues and broad production stories. Day has warm recollections of being picked up off the contract scrapheap by a practical joking Hitch, and Behlmer, as he always does, impresses with his erudition and research. Peter Bogdanovich puts in a late appearance to do his Hitchcock impersonation and dissect a sequence (the windmill scene, in this case). It's the usual stuff, in other words, and fine for what it is, but to be frank I would have appreciated comment on Miracle on 34th Street Santa Claus Edmund Gwenn's hilariously evil cameo as a hapless assassin who meets a comically ignoble end. A theatrical trailer (2 mins.) that's a little in the fashion of a newsreel and features the assassination of a Dutch ambassador (compare to the death of Arbogast in Psycho) rounds out the platter. Originally published: September 7, 2004.