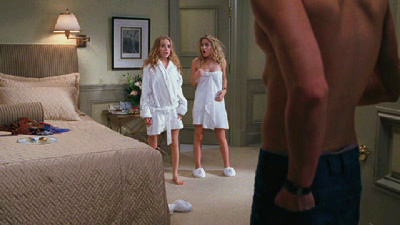 by Walter Chaw At some point in New York Minute, a Chihuahua gives Andy Richter (playing an Asian man, natch) a golden shower in the backseat of a limousine, saving one of the Olsen twins from the intimidation and possibly torture of Richter's distaff Fu Manchu archetype mother, Mama Bang (Alannah Ong). (Mama Bang later threatens that Chihuahua with a pair of chopsticks. Because chinks eat dogs--get it?) At another point in the picture, director Dennie Gordon, a woman who should be ashamed of herself, films the seventeen-at-the-time-of-shooting twins in sexy-commercial slow-motion; they're wearing towels after having showers in a cute guy's hotel room, and when said guy (Jared Padalecki) walks in on them, he asks, "Hey, is today my birthday?"

Then there's the subplot involving truant officer Lomax (Eugene Levy), a middle-aged loner who, complete with telephoto lens and binoculars, stalks one of the Olsen twins (Mary-Kate--the evil one, I think) from a lonely one-room apartment decorated with a bulletin board full of Mary-Kate pictures. Meanwhile, the twins seek refuge in an establishment called "The House of Bling" where all the black women help them look ghetto fabulous during a musical montage in which Gordon zooms in lovingly on their pre-legal posteriors. (The Chinese are found in a nail salon, the Indian's in a convenience store. ("Thank you, don't come again.")) Outside, when Lomax whips out his badge, all the black men throw their hands in the air before exclaiming, "Man, he ain't even the PO-lice." I think that Gordon and the twins believe that this joke is at the expense of Lomax. I think that they're wrong.

Continuing: a man and a woman from Minnesota are identified as Winnebago bumpkins and morons who not only wish to see Cats, an atrocious musical that's been closed now for some time, but also mistake a series of speeches delivered by high school children at Columbia University for Cats. Meanwhile, one Olsen (Ashley, I think) falls into a toilet; both Olsens fall into the sewer; Jack Osbourne makes a cameo; "Paris" and "Niki" are used as noms de guerre; an Olsen (Ashley again, I think) shares a shower with a giant serpent; and to justify it all, a tearful speech about a dead mother and the importance of sisterhood intrudes at the eleventh hour as nearly the rudest thing in an appalling picture. The dog shit joke is stolen in part from American Wedding, while a chase ends with the girls escaping their pursuer by surfing a crowd. (Giggling: "I hope everybody washed their hands!") And it becomes clear that New York Minute is a vile attempt to further sexualize the twins for some reason buried among oodles of racial stereotypes so bleakly odious that watching the picture approximates the feeling of Cleavon Little at the Klan rally--with a Nordic high school junior as your date.

So the story that ties together this ebullient seizure of racist shorthand and general inappropriateness concerns the smart twin (Ashley) trying to get a scholarship while the wild twin (Mary-Kate) thwarts her at every turn. It's interesting to think that the two demographics naturally attracted to New York Minute are pre-teen girls and dirty old men, and that what the picture does in essence is teach little girls how to be attractive to dirty old men. Ashley spends the first hour of the film mostly naked (two showers, one towel, one dream sequence), culminating in a twisted scene where the pair falls off a window washer scaffolding, thus facilitating a shot up their towels. The main comic relief of the film, such as it is (and forgetting about Richter doing his Charlie Chan imitation), is Levy, whose character is a half-step from being a full-blown pedophile; if Chitty Chitty Bang Bang's Child Catcher was the prototype, Levy in fetish-wear at end of film is the working model. Consider that this film for children traffics in sex, intolerance, and broad stereotypes--that even if you're pathologically incapable of detecting dangerous messages in your child's entertainments, New York Minute is horribly directed, edited, and performed. Consider that if you support noxious garbage like this, you suddenly lose a lot of credibility the next time you complain about the decline of western civilization. Originally published: May 7, 2004.

THE DVD
by Bill Chambers Thanks to the headlines, the supplementary material of the New York Minute DVD adopts subtext that's difficult to overlook. New Wave Entertainment's 14-minute featurette "In a New York Minute" (14 mins.) begins like any other pseudo-documentary (actually, it opens with a flat-out lie from director Dennie Gordon, who takes 'credit' away from It Takes Two helmer Andy Tennant for "[introducing the Olsen Twins] into the feature film world"), but soon the fluff soundbites start to resonate: "I do like to take things further probably than they're supposed to go," submits a chagrined Mary-Kate, and we learn that the script was nonpartisan, if you will, with Mary-Kate gravitating naturally towards the role of trouble-bound Roxy after it was written. The search continues, however, for a compelling reason to actually sit through the piece, which interviews the dog from the film at one point, overdubbing his answers in a Morris the Cat-type of voice; when Gordon calls "Gala" the "ugliest dog on the planet," she's met with the retort "Speak for yourself!" Whereupon I had to be talked down from a water tower.

The disc also includes: a 3-minute blooper reel that finds Eugene Levy cracking Jack Osbourne up by telling him he has a future and Ashley Olsen indulging a cross-section of fetishists with a kiss on her sister's bare foot; two prototypically abysmal alternate endings; "Mary-Kate and Ashley's Behind-the-Scenes Slide Show" (3 mins.), backed by the song "Vacation" from those music-industry hemorrhoids Simple Plan; and New York Minute's theatrical trailer. Loath though I am to admit it, the film's 1.77:1 anamorphic widescreen* image is utterly devoid of imperfections, while the Dolby Digital 5.1 track suggests fidelity to intent in its bland professionalism. Everything's loud and clear as a bell, but the Toronto production doesn't sound anymore authentically New York than it looks it. A block of trailers for The Polar Express, Scooby-Doo 2, A Cinderella Story, and not one, not two, but three young-adult books inspired by New York Minute precedes the main menu and rounds out the platter. Originally published: August 2, 2004.