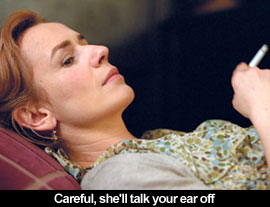 by Walter Chaw Loony Anna (Embeth Davidtz doppelgänger Sandrine Bonnaire) opens the wrong literal/metaphorical door and ends up spilling her guts to befuddled tax attorney William (Fabrice Luchini), who, as the mistaken identity crisis prolongs, seeks council of his own in the form of Dr. Bonnier (Michel Duchaussoy). William pretends to be something he's not, then, aping the words and insights of Dr. Bonnier--and Anna may not be who she seems, potentially fabricating for her "therapist" a control-freak husband and his various sexual demands. Leconte plays with the idea that talking about things is sexier than doing them, at once recalling Bibi Andersson's erotic monologue in Ingmar Bergman's Persona and playing with the thought that film is better at suggesting than showing.

Leconte is a little like fellow countryman Claude Chabrol with slightly more variety in set design, or Ozu without the strict formalism. He makes the same movie over and over again with only minor variations in execution. After a while, it becomes fairly difficult to separate one Leconte film from another in the mind. While I don't know if Intimate Strangers would have been great had I not seen anything else of Leconte's, without the boon of that ignorance, all I was left with was to mark the occasions that Leconte had already done the little movements of Intimate Strangers, often to better effect. There's a lack of energy and invention to the piece, in other words, the whole thing suffused with a feeling of inevitability and going through the motions. Recalling John Sayles's recent work, it feels as though Leconte is as sick as we are that he's doing another Leconte movie.

There's a lot to unravel in Intimate Strangers, from its noir lighting and teasing implications of a femme fatale to its quick cribbing of a Henry James's novella, "The Beast in the Jungle" (a volume of which changes hands between William and Anna), that spoke of a man paralyzed by inaction before a sensual world. In the film's greatest irony, its own existence and execution best evoke Prufrock frozen before his peach like so many of Leconte's protagonists: Intimate Strangers is erectile dysfunction mistaken for existential longing. Leconte is a wonderful visual stylist (aided by Eduardo Serra in Intimate Strangers, his seventh or eighth collaboration with the brilliant cinematographer), his play of shadows and his cigarette play models, both, of Nouvelle Vague hard-boiled love, but here it feels he's like just running over the same old ground at quarter-speed.

Being stuck on a rail is one thing, and potentially forgivable when there's this level of craft involved in the creation. Yet there's something profoundly coy and winking about Intimate Strangers. It's a malady that is either the first refuge of the insufferable, or, as is probably the case in this instance, the last refuge of the bored. Leconte's problem here is that he's trying to breathe an element of wry post-modernism into his formula, making cute what should for him be deadly serious. He forgets, at least for one film, that the only thing melodrama can't suffer is a knowledge of its own self-indulgence. Originally published: August 25, 2004.