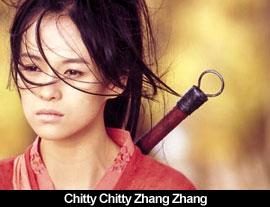 by Walter Chaw Zhang Yimou's Hero is perhaps the most ravishing, most seductively alien fantasy since a pair of 1964 releases: Michelangelo Antonioni's Red Desert and Hiroshi Teshigahara's Woman of the Dunes. It is a telling of the oft-told (in Chinese cinema) story of how the first emperor of China, Qin (an imperious Daoming Chen), was targeted by an assassin on the eve of uniting all the warring city-states of China into a kingdom, the centre of the world that calls itself to this day the "Middle Kingdom." To bridge the prescribed physical gap between commoner and emperor, X (Jet Li) tells the story of how he vanquished three of the realm's greatest killers in the function of a low-ranking magistrate--earning proximity as a result of his service to Qin with each tall tale. The body of Hero is the stories told by X, with Qin the rapt, but skeptical audience, taking his sense of manifest purpose as aegis against any attacker.

It's a Chinese Rashomon in a way, a wu xia dream of history that understands that within the Chinese heart and mind is the certainty that things happened just this way--that the possibility for magic is in the rhythms and pulses of the mundane: a certain superstition, a jealous clinch of the supernatural. Zhang embraces the Asian-ness of his story, locating each key set-piece as a colour-coded, orgiastically-saturated celebration of mood and region. X's showdown with Long Sky (Donnie Yen) takes place under a deluge in a tea garden, the fight itself seen as a daydream shared between the combatants even as Zhang and ace cinematographer Christopher Doyle marry the struggles of man with the no less predetermined capriciousness of natural phenomena. From the first (a pounding of earth) to the last (a tableau of two lovers in death in the middle of a red desert), Hero finds its mysticism and heat in the chi of the world.

The sexual heat between assassin Broken Sword (Tony Leung Chiu Wai), his lover Flying Snow (whose name, in Chinese, is a homonym for "Flying Blood" (Maggie Cheung)), and Broken Sword's calligraphy student, Moon (Zhang Ziyi), presents Hero with its central conflict. Those human attributes of sexual jealousy, pride, legacy are all placed in the crucible of something immeasurably humble. The most improbable product of the hugeness of this epic is the modesty embodied in its resolution. Zen isn't a personal thing, it's the ambition to be utterly indistinguishable from everything: a slaying of ego, a quiet absorption into the universe. And Hero is likewise about the laying down of the petty conflicts and revolutions of man in favour of a larger, holistic whole. It's a peace constructed from more than a lack of war.

The fight sequences are extraordinary in their poetry--this may be the most beautiful film ever made in the digital age--and matched by a spirituality that finds secrets and whispers in the way a man writes a word. Hero suggests interconnectedness, between all things and all actions, so that every gesture carries the weight of cathedral bells. It's chaos theory reduced to its formalist logic, and Zhang does the impossible by balancing the majesty of a martial arts extravaganza with the chamber opera of interpersonal drama. This is the best mainstream film to come out of mainland China since Hong Kong returned to the bosom of the motherland, because it finds that patiently unravelling thread of hope in the heart of the Chinese that their time beneath the yoke of oppression will end one day. And it'll end as a result of small people like themselves finding the courage to lay aside their small dreams to, at some critical moment of transcendence and metastasis, change the world. Originally published: August 27, 2004.