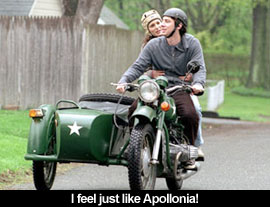 by Walter Chaw As disaffected turns of phrase go, New Jersey's nickname "The Garden State" is a pretty fair description of a vegetative state of mind. Zach Braff's hyphenate debut Garden State seizes on that wilful misreading, offering up a Girl, Interrupted for boys featuring a lead character fresh from The Bell Jar: an over-medicated, under-emoted man who just wants to feel something, damnit. It's what passes for groundbreaking independent cinema in the new millennium--drugs and depression as a stage for spastic trick shots (the great fallout from Darren Aronofsky's Requiem for a Dream). It demeans low-achieving minimum wagers with small-dreams and extols the virtues of true love without aspiration, but its scattershot glimpse of fad-fortunes vs. old money doesn't go very far in making the case for Garden State as either social exposé or romantic whimsy. If the picture's anything, it's just a worn rock skipping along a smooth, glassy surface.

Struggling actor Andrew Largeman (Braff) returns to his tiny hometown upon the drowning death of his paraplegic mother. Medicated by his shrink father (Ian Holm) since the tender age of nine, Andrew decides to take himself off the lithium for the duration of his trip in a long-overdue search for authenticity of experience. Sure enough, Andrew (called "Largeman" or just "Large" in a kind of ironic Arthur Miller deal, I think) meets the girl of his dreams, Sam (Natalie Portman), another member of this kind of film's gallery of jovial freakism. She's afflicted with epilepsy, compulsive fibbing, and the truly crippling starlet-trying-too-hard disease, and she offers Andrew an opportunity to examine his life and times through the lens of the quirkily differently-abled.

Collapsing into a series of depressed vignettes paced and posed like a Paul Thomas Anderson film scored by Coldplay and Simon & Garfunkel, Garden State has a pleasing slickness about it while collecting debts, too, to Wes Anderson and Doug Liman. It's hard to get a handle on the tone of the piece, jarring as it does back and forth between slapstick and mordancy in a way too clumsy to be fruitful. While it appears to aspire to a sort of Harold & Maude balance, instead of mellifluous, Garden State really just feels like a car crash--the misbegotten child of The Graduate and The Exorcist. A line about the author of Brave New World being "Aldous Huxtable" is pretty smart and funny, sure, but also a fluky summary of the film's schizophrenia.

Little visual themes--such as the way that Braff's characters initially seem to be physically marked by their experience and humiliations--give way somewhere along the line to far more standard, almost obligatory, shots of our heroes in a swimming pool, fully dressed in a two-person tub, and warming themselves before a contemplative fire. Garden State starts off with a lot of inventive promise and ends up overly familiar, even trite. Worse, Braff, who is in love with his visuals, doesn't ultimately have enough faith in them, over-writing the conclusion (staged in an ark on the edge of an abyss, à la the Polish Brothers' also-overwritten Northfork) to such an extent that it's funnier than it is existentially poignant. "Good luck exploring the infinite abyss," indeed. As diaries of the numb go, Garden State has its moments (most of them provided by the lizard-lidded Peter Sarsgaard as Andrew's grave-robbing burnout pal), but its desire for pat, sentimental closure causes it to contort beyond its flexible range. If this isn't exactly a bad debut, it lacks the urgency and bite of a film made under fire. It's as laconic, cocksure, and disassociated as Braff's medicinally-altered alter ego. Originally published: August 13, 2004.