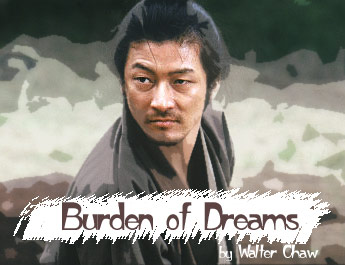 Tadanobu Asano, the pride of Japanese cult cinema, on his latest performances

August 8, 2004|A lot of people are calling Tadanobu Asano Japan's Brad Pitt; I'm more comfortable comparing him to Johnny Depp. He's a beautiful guy, no question, but he's also fond of quirky film choices that work against his matinee-idol good looks. If he couldn't act, it'd be career suicide, but in the course of a little over ten years, Asano has fashioned a body of work that alternates between disturbed and disturbing. It says a lot about the Japanese audience that he has found fame and fortune playing sociopathic murderers and suicidal urban manqué.

Asano worked with the most exciting voices in the freakishly iconoclastic Japanese cinema: Master Nagisa Oshima in the underseen Gohatto; cult heroes Kiyoshi Kurosawa in the brilliant Bright Future; and Takashi Miike in the already notorious Ichi the Killer. The latest Asano film to reach American shores is Takeshi Kitano's long-awaited version of the blind swordsman serial Zatoichi, and although the film itself has a few things that make it only middle-of-the-pack Kitano fare, Asano provides another fantastic performance that manages the very-difficult task of holding his own against the brilliant implosion of Kitano on-screen. (Something at which he has some experience, having played opposite Kitano in Gohatto.) Between Zatoichi and festival-fave Pen-Ek Ratanaruang's amazing Last Life in the Universe (both set for U.S. release this month), Asano is poised to add to his cult notoriety in North America.

Through the good graces of two translators (the official on-site one and a friend of mine who was gracious enough to provide a word-for-word play-by-play after the fact; thanks, JG), I spoke with Asano via conference call from New York. We covered a few bases: his band, his admiration for all things Sex Pistols, and his recent dabbling behind the camera. He's a superstar in the making, and I was giddy as a schoolgirl.

FILM FREAK CENTRAL: I know that, like Takeshi Kitano, you're a well-regarded painter, poet, and calligrapher. What is it about Japanese cinema and this rampant creativity?
TADANOBU ASANO: (laughs) My life would be very dull if it was just making movies. I'm a creative person--my wife is a musician, too, and I've played in a few bands myself. If I had to wait to express myself through just films--and you know how long it takes to get films off the ground and even how long it takes to get to do your takes once they have gotten off the ground--I'd be very unhappy. I don't know if there's something in the Japanese spirit that drives that, but as a culture, I know, we're very respectful of artists--more so than in America, or so I've been led to believe.

You've expressed your love for The Sex Pistols often--what was it about them?
For me the band--Sid Vicious especially--represented everything that I admired about the act of making something. They didn't care what anyone thought, they were symbols of artistic freedom and if you watched them perform, they did it with so much joy and abandon.

I've heard that you act the same way when you're performing on stage with a band.
(laughs) It's something that I've been asked about before. In person I think that I come across as someone who is very normal, very calm--but onstage and in some of my roles, I'm more uninhibited. I've been asked to address the divide between my private self, or my intimate self, and my public self. Honestly, I have no idea where it comes from--I like to be mysterious sometimes and say that maybe it's just me acting like Sid Vicious instead of being him, but the line between that kind of fiction and reality is almost impossible to draw. I'm always acting like something, right? So are you--so does everyone.

The stereotype of the Japanese culture is that it's very repressed and polite--and yet its cinema is consistently among the most daring and controversial in the world.
Yes, I think that there's a connection there, after all, between our private selves--how we conduct ourselves with each other in polite society--and in the movies that we celebrate. I love working in the Japanese film industry for that because I get to work with a wide variety of gifted directors in a wide variety of scenarios and stories. It seems that the reserve in our culture translates into an unusual freedom in our art. The diversity of subjects and artists willing to go out on a limb for their visions, I think, separates Japanese film culture from the film industries in the West. More than that, not only do these movies get made, but the Japanese people go to see them. In America, I think, a lot of my movies are really hard to see, or just don't get seen, but in Japan it's different.

No interest in going to Hollywood, then?
(laughs) No, not at this moment. Never say never, yes? But, no.

I've read that Kitano as a director is extremely open to improvisation and collaboration--did you find that to be true on Zatoichi?
Absolutely. Takeshi Kitano is supremely confident in his vision--enough to let it go a little if that relinquishing of control feeds into the greater good. I was really able to construct my character with Kitano--he has this thirst for knowledge, this unquenchable thirst, and he's really knowledgeable about a wide variety of things. How that curiosity comes out in the director/actor relationship is that he genuinely wants to know how you see the film and the character. We had many conversations about Hattori (Asano's character in Zatoichi -Ed.), and I really came to understand and respect my role. That was Kitano's gift to me.

You've just finished directing a short film. Any lessons learned from the filmmakers you've worked with?
It's called Tori and it's an omnibus consisting of five sketchy images taken from dreams that I've had, visualizations of those dreams--it's a stream of consciousness. It helped, for sure, working with Miike, Kitano, Oshima, in that they helped me, each one of them, to figure out what my own process was, how best to express myself. It was better than any film school, working with these titans of our cinema, I've been amazingly blessed in my career.

The idea of dreams seems to be recurrent in your pictures.
To be close to dreams and imagination is vital for an artist--to be in touch with the unconscious is the most important thing because the closer you get to an idea of an authentic vision, the closer you get to speaking to something at the heart of everyone. That is an artist's goal, I think: to be able to tell your dream to a stranger and for the stranger to recognize the dream as his own.

Yet your films tend towards the dark--is our common human element darkness?
That's an interesting question. I'll answer it in this way: that it's not a conscious choice for me to play dark characters or perform in dark dramas, but I'm drawn to them in the same way that filmmakers seem drawn to me when they're casting a dark hero, or a dark movie. It could be something as simple, after all, as that they've seen me do roles like that before and like what they see and think, "Hey, I have a role like that in my movie," and give me a call. For me, I find a certain kind of freedom in playing someone with a different set of morals than I do--it's healthy, almost, for me to play a person who is suicidal when my own life is so bright and fun. For me to understand what it is to be lonesome--and growing up one-quarter Caucasian in Japan was another great opportunity for me to understand loneliness (laughs)--is to remind me what I have and what I could lose. But again, even if it's something in me, it's not a choice that I make consciously.

Your darkest film may be Miike's Ichi the Killer. Any misgivings about it at the time or since?
Never. I was a big fan of the Manga on which it's based so when Miike asked me to do it, I jumped at the chance. There are moments in the Manga that are almost unbearably violent, so I knew what I was getting in to, but I'll tell you the truth that Miike's sets are so relaxed and confident that there was never a feeling of darkness about it as we were shooting the movie.

You seem driven, often, by source materials that are non-cinematic.
Yes, I don't watch very many movies, to be honest with you. It's not my favourite art form. The directors that I have chosen to work with have each of them appealed to me in some other way. With Sogo Ishii, between Labyrinth of Dreams and Electric Dragon 80,000 V, we started a band together [called Mach 1.67] and composed the title song for the latter film. With Gohatto, of course, there was the painterly quality of Oshima. And with Kitano, there was his visual mastery and his poetic rhythms that drew me. For me, the best movies are the ones that owe the most to painting and music and poetry--they're the ones that come the closest in my mind to dreaming.