TOM DOWD & THE LANGUAGE OF MUSIC
***/****
directed by Mark Moormann 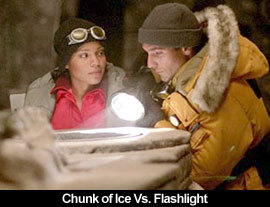 by Walter Chaw Paul W.S. Anderson makes horrible movies from horrible ideas. He doesn't know how to shoot action scenes, he doesn't know how to shoot dialogue scenes, and he doesn't know how to craft a pleasurable B-movie. Early on in Alien Vs. Predator (a film trumped by not only every single other entry in the respective titular franchises, but also Freddy vs. Jason), someone's watching an old Universal horror film on television--I think it's House of Dracula--and it announces in a promisingly self-knowing way that the movie knows what its roots are and that it intends to honour them. As the story unfolds with the discovery of an ancient pyramid ("It's the first pyramid ever!") buried beneath two-thousand feet of Antarctic ice, visions of Howard Hawks's The Thing and Karl Freund's The Mummy dance happily in the head while the Queen Alien is awakened via Tesla Coil like James Whale's Bride. Unfortunately, all hopes for the picture are quickly dashed.

Set in the present, Alien Vs. Predator finds billionaire industrialist Charles Bishop Weyland (Lance Henriksen) recruiting a team of amazingly good-looking eggheads Jurassic Park-style to investigate said frozen artifact. Because only two or three of these meatbags is developed beyond the level of silhouette-holding-gun, it's pretty easy to key in on who's going to die tragically (as opposed to just dying) and who's going to get mad props from the curiously ghetto Predators. It seems that the earthlings have been lured to this buried ziggurat to act as host bodies for the Aliens (the gestation period for said Aliens anywhere between fifteen minutes to an hour) so that a trio of young Predators can hunt them as a rite of passage. Why Earth? Why the ignorance of all future films in the timeline of this little discovery? Why the slow-motion, Matrix bullet-time nonsense? One answer: lack of imagination.

That's not fair--Alien Vs. Predator also lacks energy, momentum, logic, tension, fear, and a readable script. The performances are excruciating across the board, with the worst moments reserved for a kick-ass naturalist, Alexa (Sanaa Lathan), meant as some sort of cross between Sigourney Weaver and Danny Glover and getting all tribal with her bad self before a finale that actually rips off Predator 2. One moment early on when Weyland does the knife-trick that Bishop the Android performs in Aliens tweaked my geek pleasure centre, but it's a fleeting and lonesome Easter egg. Without a kinky bit towards the end where it seems like Alexa is going to lay a big wet one on a Predator, there's almost no reason to stay awake. Even the special effects are awful, either computerized to death or shot on a heated Antarctica soundstage where it snows all the time but a person's breath doesn't show. Anderson has bestowed the Predators with the personality of Klingons and has made guns lying in snow give off heat signatures in the Predator's infrared vision; I know you're not looking for Shakespeare here, but you're not even going to get Stephen Hopkins.

What Alien Vs. Predator really needed was legendary Tom Dowd at the mixing board. The man behind John Coltrane, Ornette Coleman, Tito Puente, Thelonious Monk, The Allman Brothers Band (before the fall), Derek & the Dominos, and on and on gets the documentary treatment via a nice little piece by Mark Moormann called Tom Dowd & the Language of Music. A master of balance, of teasing out the sense from the noise tapestry, Dowd began his career when musicians recorded tracks directly onto vinyl via one-track (i.e. in mono), meaning that the engineer would have to predict the rising and falling of a piece to avoid scratching too deep or too shallow. It was an art in and of itself, one for which Dowd credits his acumen to an appreciation of blind musicians--especially the late Ray Charles, who puts in a touching appearance here.

The film covers an amazing amount of material in a brisk, efficient, lively-if-traditional way, detailing Dowd's work with the U.S. Military on the Manhattan Project, of all things, and providing a meticulous breakdown of how Clapton's "Layla" was coaxed into life beneath Dowd's epicurean fingers. The evolution of sound recording is essayed, too, from the mono drop-needle to eight-track to the 120-track digital recording studios of today, where guitar legend Les Paul suggests that even a tone-deaf pretender can sound like a god. Through it all, Dowd remained an innovator, dying just after this film was completed and hoping that its creation would finally give face to the little name beneath the big names on the backs of all those records. How quaint: the idea of an artist who makes other artists better. I guess that makes Paul W.S. Anderson the anti-Dowd. Originally published: August 13, 2004.